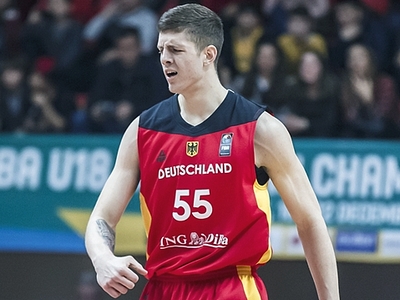 Strengths:
-Excellent physical attributes for either big man position, standing 7'0 without shoes, with a 7'2 wingspan
-Big, strong frame. Already weighs 242 pounds. In very good shape
-Extremely fluid, agile and mobile 7-footer. Quick first step. Tremendous body control. Plays above the rim with ease off two feet
-Skillful creating his own shot from the perimeter. Major mismatch threat for opposing big men with his ability to handle the ball, change speeds, utilize crossovers, and even operate as the ball-handler in pick and roll situations. Draws fouls at a high rate. Knows how to use his body to create space and will finish creatively around the rim using floaters and scoop-shots
-Shot 67% from 2-point range at the U18s
-Has good court vision and can execute some highly creative passes when he wants to. 5.3 assists per-40 at U18s
-Can punish weaker defenders with his back to the basket. Has tremendous footwork and body control in the post. Can contort his body with awkward angle release points, using both hands.
-Can make an open 3-pointer. Hit 10 threes in nine games at the U18s.
-Shows very good potential defensively. Can slide his feet, cover ground and stay in front of smaller players when he's focused. Can also hold his ground in the post against traditional big men.
-Averaged 2.5 blocks and 2.5 steals per-40 at U18s
-Excellent rebounder at this level. 14.4 per-40 at U18s

Weaknesses:
-Very reactive to his mistakes. Blames teammates outwardly. Taunts opponents. Body language goes south as soon as adversity strikes. Has a short fuse that he'll need to get a better handle on
-Settles for 3-pointers early in the offense, often out of rhythm. Mechanics are highly unconventional. Has a slow release and a strange side spin on his jumper that causes very inconsistent results.
-Career 28/99 (28%) 3-point shooter.
-Career 90/146 (62%) from free throw line, but has been better this past year (70%)
-Feel for the game is a work in progress. Wants to hold the ball and go into iso mode every time he touches it. Telegraphs his passes at times. Decision making is poor at times. Averaged a sky-high 6.3 turnovers per-40 at U18s. Has always struggled with turnovers in every setting
-Loses his focus at times defensively. Little bit late getting out on closeouts. Struggles to stay out of foul trouble. Somewhat of a tweener defensively. Likely best suited to play the 5 at this size, but doesn't have ideal length and isn't a great rim protector.

Outlook: Hartenstein was undoubtedly a top three prospect at this tournament and produced appropriately, at 22 points, 14 rebounds, 5 assists and 2.5 blocks and steals per-40. His team ended up disappointing somewhat by losing to Lithuania and Italy in the knockout stages and finishing in fourth place, with Hartenstein having his worst showing of the competition in the semis. Nevertheless, Hartenstein dropped vivid glimpses of his exceptional versatility and talent in every game he played in, and is a rare prospect with his combination of size, athleticism and skill. He's seeing decent playing time in the Lithuanian league with Zalgiris, and has the talent to get strong consideration in the lottery with good workouts. There are some question marks about his on-court demeanor at times, but this may be something he can overcome with age and maturity, as he gets good feedback from coaches he's worked with off the court.

Strengths:
-Tremendous physical profile. 6'9 without shoes with a 7'1 wingspan and terrific 220 pound frame that will fill out considerably in time. Big hands.
-Fluid athlete. Light on his feet. Covers ground impressively.
-Makes an impact without plays being called for him. Fill in the blanks guy who scores off cuts, offensive rebounds and rim-runs
-Can handle the ball in the open floor or attack slower defenders in a straight line in the half-court. Has long strides and soft touch off the glass
-Shows potential as a floor spacer. Has a consistent release point and good wrist action. Likely something he can develop in time
-Has a very good feel for the game. Makes extra pass along the perimeter, without hesitation.
-Rebounds out of area on both ends of the floor, and then pushes ball nicely up the floor with the pass or dribble.
-Averaged 4.7 offensive rebounds per-40 at the U18s
-Shows impressive versatility defensively. Covers a ton of ground and shows the potential to guard all over the floor. Can put pressure on ball-handlers, trap in the backcourt, deny off the ball intelligently, or close out on shooters for blocks behind the 3-point line.
-Playmaker defensively, averaged 1.9 steals and 2.2 blocks per-40
-Has strong intangibles. Highly intelligent off the court. Good teammate on it. Very positive presence on the floor. Brings a calmness to the team. Plays with great energy. Seemingly never gets tired

Weaknesses:
-Still at an early stage of maturation physically and skill-wise
-Limited offensively at this stage. Doesn't have a consistent means of putting the ball in the basket
-Average ball-handler. Relegated mostly to straight line takes. Gets knocked off his path easily. Doesn't have much of a plan if his first step gets cut off
-Lacks a degree of toughness, explosiveness and aggressiveness as a finisher. Struggles to convert plays around the basket at times
-Still figuring out how to use his size in the paint. Not unwilling, just doesn't have the body or strength to do so yet. Rudimentary footwork.
-Jumper is at an early stage of refinement. Career 59% 3-point shooter in international play. Has made just three 3-pointrers in 13 games.
-Doesn't shoot on the hop. Jumper takes a while to get off
-Struggles to guard on the interior. Can't always hold his ground against stronger players. Gives up deep post position and gets backed down.

Outlook: Son of a professional boxer from Brazil. Late blooming combo forward committed to Stanford. Has grown significantly the past few years, helping him emerge onto the national team radar. Made his first official appearance at a FIBA Competition here at the U18s, and showed a ton of intrigue with the potential to get significantly better in time. Started at small forward despite standing 6'10 in shoes. Appears to be nowhere near his peak physically. Should be able to get more athletic in time with a good strength program. Could easily top out as a guy who plays both interior spots, spaces the floor, switches on pick and rolls and makes plays using his high basketball IQ. Could very well end up being one of the top prospects seen at this tournament.

Strengths:
-Real seven footer with an impressive frame
-Mobile big man who runs the floor well and is fairly agile/nimble
-Moves off the ball intelligently. Knows how to present himself to his guards
-Has very soft hands and touch inside the paint. Catches virtually everything thrown his way.
-Difficult player for opposing big men to put a body on at this level. Carves out post-position effectively.
-Good footwork and body control around the basket. Uses shot-fakes, up and unders and spin moves to his advantage.
-Magnet for fouls inside the paint. Very difficult to keep off the block. Lived at the free throw line at the U18s. Attempted 40 free throws in just 99 minutes of action.
-Shows soft touch from the FT line. Made 70% of his attempts
-Capable of seeing the floor and passing the ball when motivated. Passes out of double teams.
-Turns the ball over at a fairly low rate relative to his usage
-Gravitates towards the offensive glass and has a knack for coming up with loose balls. Led the tournament by a wide margin with an outstanding 8.7 offensive boards per-40.

Weaknesses:
-Doesn't always play with the type of aggressiveness you might hope. Intensity level is lacking at times defensively
-Gives up deep post position. Allows himself to get backed down by weaker players. Lazy getting out on closeouts.
-Offers very little as a rim protector. Only blocked 3 shots in 99 minutes at the U18s.
-Not overly explosive from a standstill. Needs to load up to play above the rim.
-Doesn't want to use his left hand around the basket
-Very reactive to what's happening on the floor. Outwardly expressive to every non-call, missed shot, etc. Not a next play guy. Demonstrates poor body language when things aren't going his way.

Outlook: Atar played up a year as a 1999-born prospect, but nevertheless finished the tournament as the most productive per-minute player in attendance, at 29 points and 16 rebounds per-40 minutes, on 63% shooting. Somewhat old school with his back to the basket, non-shooting/rim-protecting style of play, when Atar is engaged and active he's an absolute handful to deal with at this level.

Strengths:
-Has an impressive physical profile. 6'10 in shoes with a strong frame and solid length.
-Smooth and fluid athlete who can play above the rim off two feet
-Shows a fairly versatile skill-set for a modern day power forward.
-Really nice looking catch and shoot stroke. Ball comes out of hand really nicely for 3 on kickouts.
-Hit 10 of his 22 3-point attempts at the U18s in six games.
-Can put the ball down and attack closeouts in a straight line, sometimes even finding the open man off the bounce
-Team player who is more than willing to make the extra pass
-Shows soft touch around the basket. Shot 61% for 2 at this tournament
-Has the ability to cover ground nicely defensively. Gets out to contest shots on the perimeter.
-Averaged 12 rebounds per-40, in line with his averages at all three FIBA tournaments he's played at.

Weaknesses:
-Doesn't know how to use his size to his advantage at this stage. Sets soft screens and struggles to operate with his back to the basket, even with much smaller players on him.
-Uses his right hand on the left side of the basket
-Has a degree of passivity, passing up open shots and deferring to far-less talented teammates, even when his team needed him to be aggressive. Gets down on himself easily.
-Has the tools to be a good defender, but not the technique or fundamentals yet. Lacks experience in that area. Feel/awareness is average, as evidenced by his paltry 1 steal and 1 block per-40 minutes at the U18s.
-Career .9 blocks per-40. Has the tools to do more in this area.
-Shot just 64% from the line at the U18s. Career 65% in national team play.
-Has a bit of a wind-up to his spot-3. Doesn't step into them or shoot on the hop

Outlook: Blumbergs started off the tournament slowly, but really came on down the stretch, particularly in Latvia's final two games which they needed to win in order to avoid relegation to Division B. He ended up finishing the tournament #2 overall in PER, posting an excellent 21 points and 12 rebounds per-40 minutes pace adjusted, on good efficiency (65% true shooting percentage) Blessed with strong physical tools and the skill-set many teams look for from a stretch four-man, Blumbergs is someone teams will want to monitor in the coming years.
Read Next...