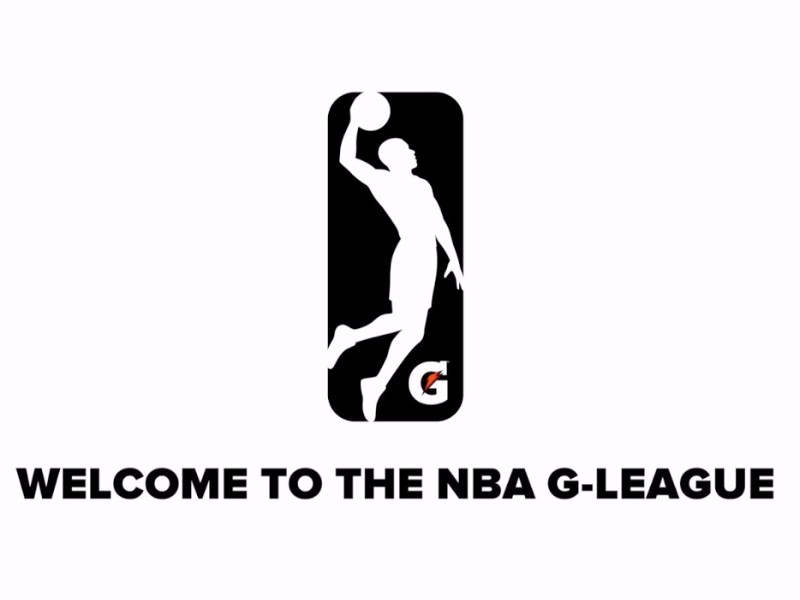 Mike Schmitz
@Mike_Schmitz
The 2017 NBA D-League Elite Minicamp wrapped up Tuesday afternoon. In our third straight year covering the event, we were able to learn more about some of the league's top talent watching them in competitive action and getting a unique mid-career look at their measurements and athletic testing results.
Scrimmage, Measurement, and Athletic Testing Standouts
-Fresh off of a 17-game rookie year with the Erie Bayhawks, Jamaican big man Shevon Thompson stood out from a measurements standpoint as he was the tallest and longest player in attendance standing 6'10.25 (94th percentile in our database) without shoes with a 7'4.5 wingspan. His 9'3.5 standing reach (97th percentile) also ranked first among the group assembled here. From a size (247 pounds) and length/reach standpoint he has similar size to Cole Aldrich. Aside from his ability to take up space and impact the game on the glass, Thompson struggled to make his mark as a rim protector or perimeter defender. This isn't shocking given the fact that his 14.23 lane agility score is the worst time in our extensive database. Along with his shaky feel and skill set, Thompson's athletic limitations have kept him from making the most of his physical gifts at this point of his career., but also make him a player NBA teams will want to continue to monitor long term.

-Charles Garcia, Egidijus Mockevicius, and Nikola Jovanovic all measured 6'9 barefoot to round out the top four. Jovanovic, who elected to leave USC after his junior season, didn't have a great camp but has appeared to have added some good muscle to his upper body, weighing in at 237 pounds, an improvement from his Trojans days. Garcia didn't play the second day due to injury. Mockevicius measured a 9'0 standing reach, tied for third-best at the mini-camp, and impacted the scrimmages with his energy even if he struggled a bit on the defensive end.
-Joshia Gray and Russ Smith measured the shortest of any players in attendance at 5'11 (4th percentile) and 5'11.5(6th percentile) barefoot, respectively. Smith was also the camp's lightest player at 162.5 pounds, only 2.5 pounds heavier than his 2014 NBA Draft Combine weight. The score-first Louisville guard struggled to find his footing on in the competitive action in Chicago.
Despite his size, Gray stood out both on the floor and in the athletic testing. The ultra-explosive point guard got into the paint at will, created for others and found ways to make enough shots to keep the defense honest. Gray posted the fifth-best max vertical at the minicamp at 38.5 inches. Although Gray is about 15 pounds heavier, his measurements of 6'1 in shoes with a 6'4.75 wingspan are similar to D-League product Tim Frazier.

-Former Stony Brook standout Jameel Warney was the camp's heaviest player, weighing in at 270 pounds (98th percentile), 11 pounds heavier than his 2016 Portsmouth weight. Despite the gain (and the fourth-worst shuttle time at the camp), Warney actually looked fairly nimble for his size, regularly stepping out to hedge ball screens effectively. He has fairly good feet in tight spaces and was able to impact the game as an interior scorer, using either hand on jump hooks while showing strong instincts on the offensive glass. Warney did measure a tad short for a five man at 6' 7.25 in shoes, but his physical profile isn't all that different from Phoenix Suns big man Alan Williams. Warney's 7'1.75 wingspan is 0.25 inches shorter than Williams' but his 8'11 standing reach is half an inch taller. Warney doesn't have a lot of margin for error physically, so he'll have to stay in good shape, but it's not out of the question that he finds a way to sneak into the league much like Williams did.

-Cliff Alexander, who didn't play the second day due to injury, measured the third-largest wingspan at 7'3.5, consistent with his past measurements. Alexander, standing 6'8.5 in shoes with a 248 pound frame, also posted the biggest difference between height (no shoes) and standing reach with a 29.75 gap. Alexander's 9'1 standing reach ranked second among all players at the camp. Measurements have never been Alexander's problem, however, as he'll have to play with a consistent motor and strong enough mentality to work his way back into the NBA. He posted the second-worst lane agility score at the camp, which doesn't bode well for his switch-ability at the NBA level, but isn't a deal breaker either.

-Chris Horton posted the second-longest wingspan at the camp (7'4) and the largest height (no shoes)-wingspan differential with a margin of 9 (99th percentile). The only current NBA player in our database with a bigger differential is Rockets big man Montrezl Harrell. At 225 pounds, Horton isn't nearly the physical specimen that Harrell is, and his overall skill set is still a work in progress after an average year with Grand Rapids.

-Former Texas A&M guard Alex Caruso impressed with his athletic testing numbers as he finished third in both the 3/4 sprint and 4-way agility test, while also posting a solid 36 max vertical. Physically, Caruso is very similar to former Grizzlies guard and current Panathinaikos floor general Nick Calathes at 6'5.25 in shoes and 188 pounds with a 6' 6 wingspan. Coming off a solid rookie season on a well above average Oklahoma City Blue team, Caruso impressed on the floor and proved to be one of the top guard prospects in the camp. He's extremely instinctual on the floor, defends and is a solid athlete to boot. Proving that he can continue to knock down 39% of his threes like he did last year will be key for his NBA chances.

-As expected, Perry Ellis didn't stand out with his measurables at 6'8 with a 6'10.5 wingspan, and 8'7.5 standing reach, to go along with a 221-pound frame. Those marks have remained remarkably steady since he was just 16 years old, as Ellis is a prototypical early bloomer. With that said, Ellis was excellent on the floor all camp long, scoring at least 17 points in all four games (20 and 25, respectively, Tuesday) on efficient shooting. His footwork, ability to create with spin moves and straight line drives from the perimeter, touch around the rim and improved three-point shooting were evident in Chicago. Ellis is coming off of a fairly average rookie year with Greensboro and certainly has room to improve (defensively and as a facilitator), but he helped himslf at the Elite Minicamp and his physical profile isn't a deal-breaker. He's quite similar to a four like Tobias Harris, who measured 6' 7.75, 223 pounds with a 6' 11 wingspan and 8' 7.5 standing reach, although Harris was only 18 at the time.

-John Jenkins appears to have lost a bit of athleticism over the last five years as his maximum vertical leap (-4), no step vertical leap (-5), lane agility, shuffle and 3/4 sprint all declined since the 2012 NBA Draft Combine, as expected given his injury history. It was good to see Jenkins healthy and making shots. Although a tad undersized at 6'4 in shoes, Jenkins has excellent length at 6'9, and can still provide some floor-spacing and off-screen shooting at age 26, making him someone NBA teams will likely continue to kick the tires on.

-Maine Red Claws forward Jalen Jones measured fairly well for a modern NBA bench four man at 6'7 with a 6'11 wingspan and 8'9 standing reach, to go along with a 228-pound frame. Although not as bouncy, his measurements are somewhat similar to a Thaddeus Young type, who measured 6'7.5 in shoes with a 6'11.5 wingspan and 8'10 reach at the 2007 NBA Pre-Draft Camp. Jones was able to parlay a monster rookie year (20.5 points and 9.0 rebounds per game) into a strong D-League mini-camp performance. He proved to be one of the more consistently competitive players on the floor and shot it well enough with tim and space to inspire hope moving forward. Jones showed out as one of the top NBA prospects in the camp.

-24-year-old forward Alfonzo McKinnie didn't stand out from a length perspective as the 4/3 came in at 6'8 with only a 6'9 wingspan. McKinnie is a bit light at 215 pounds, but has a nice frame and moves with tremendous fluidity while playing above the rim with relative ease. The Chicago native turned Windy City Bulls starter put together an excellent first year in the D-League, averaging 14.9 points over 29 minutes per game on 57% shooting from two and 31% from three. Given his ability to sit down and guard the perimeter along with his seemingly developable jumper, and explosive finishing ability, McKinnie is a potential candidate for a two-way contract.

-23-year-old Jordan Loyd measured very well for a combo guard prospect at 6'3.25 with a 212 pound frame and a 6' .5 wingspan. Although a tad shorter and clearly not as explosive, Loyd measured somewhat similarly to Victor Oladipo (6'4.25, 213 pounds with a 6'9.25 wingspan). Loyd impressed over the course of the two-day camp with his ability to put pressure on the rim in transition, play at different speeds, create for others and make enough shots from the perimeter to keep the defense honest. After an underwhelming first two years at Furman, Loyd put together a nice career in NCAA D2 at Indianapolis, and parlayed that into an excellent rookie season in Fort Wayne with the Mad Ants, scoring 21.6 points and dishing out 5.7 assists per 40 on 47.8% shooting inside the arc 32.4% from beyond it. The Atlanta native helped himself in Chicago, and will likely continue to get looks from the NBA in summer league and beyond.

-Devondrick Walker helped himself with his measurements at 6'5 with a 6'11 wingspan, somewhat similar to Raptors guard Norman Powell who stands 6'4.25 with a 6'10.75 winspan. Walker also tied for the second-best maximum vertical leap at 39 and shot the ball well from the perimeter, building on the 41% 3P% clip he posted in the D-League last year. An NAIA product turned D-League journeyman, Walker's 3 and D off guard potential and tremendous measurements were on display in Chicago.

-Veteran Travis Leslie unsurprisingly posted the top maximum vertical leap at 40 and the top standing vertical at 33.
Read Next...