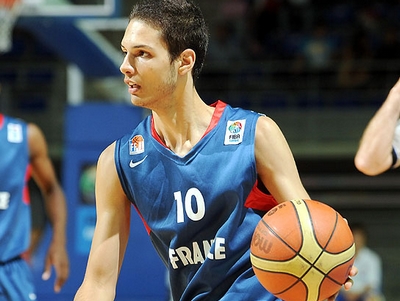 Despite being one of the youngest players at this camp at just 16 years old, French swingman Evan Fournier regardless managed to emerge as one of the top scorers here, all while leading his team to a competitive fourth place finish.

While still extremely young, Fournier has to be considered an intriguing prospect thanks to the excellent size and scoring instincts he brings to the table, as well as the ability to create both for himself and others. Obviously he still has a long ways to go, but there is a lot to work with already.

The clear-cut MVP of the Adidas Nations tournament, Cory Joseph (#25 Scout, #7 Rivals, #30 ESPN) led his team to within a single possession of winning the championship game, while leading the entire camp in scoring. The more you watch Joseph, the more you feel like hes destined to become a fantastic player at the college level, even if there remain some question marks about his long-term potential.

Josephs physical attributes arent great, as his body is just OK and his athleticism not much more than average. He makes up for that though with his ability to play at different speeds, an excellent basketball IQ, and a fearless attitude. Joseph has a great demeanor on the floor and a real winners mentality. Hes a calm, steady, competitive guy who tends to dominate the ball, but can absolutely score with the best of them.

Offensively, Josephs best attribute is clearly his jump-shot. He is terrific with his feet set and almost just as dangerous pulling up off the dribble, which he likes to do quite a bit after creating space for himself in the mid-range area. He lacks the explosiveness to get into the paint and finish at a high level, but is very crafty using his body around the rim and has a very nice floater he likes to utilize.

Defensively, Joseph is limited by his average lateral quickness, but he does put a good effort in, showing nice intensity and a good feel for staying in front of his man.

As a point guard, Joseph is mostly a mixed bag at this stage, as he clearly needs to dominate the ball to be most effective, but is far more comfortable looking for his own shot than he is running a team. His shot-selection leaves something to be desired at times, but its possible that with better teammates around him, he could show more in this area than we were able to see. He doesnt appear to be a selfish player, and seems to have a very good demeanor on the floor.

Joseph has skyrocketed up the recruiting rankings since we last saw him in November of last year, even moving up into the top-10 on some peoples boards (Rivals.com for instance). While he may not share the upside of some of his counterparts in that part of the rankings, he has been incredibly productive in every setting hes been in as of late, most notably the FIBA U-19 World Championships. He has a chance to emerge as a Stephen Curry type scorer at the college level if he continues to improve his all-around game.

Slowly moving his way up the recruiting rankings, Dwight Powell (#67 Scout, #23 Rivals, #37 ESPN) had another solid showing here at the Adidas Nations camp, competing with the Canadian team, to wrap up a pretty successful summer.

Powell has good size for either frontcourt position, at 6-10 with a good frame that should put on weight in time, but is very underdeveloped at the moment. He runs the floor well and overall is a pretty mobile big man, fluid, although not terribly explosive, and probably a little fatigued by the end of this event.

Powells main asset is likely his excellent basketball IQ, which shows up in almost everything he does. He understands how to operate in the half-court, and is a very unselfish passer who has no problem facing up from the high post, where he can also make mid-range jumpers with decent accuracy, or put the ball on the floor in a straight line. His footwork is fairly raw inside, and he doesnt have the strength to really do much down in the paint, but he is capable of finishing with either hand and shows nice touch around the basket. Powell isnt the toughest guy youll find, and this shows up primarily on the defensive end, where he can get pushed around.

Powell recently trimmed his list down to Georgia Tech, Stanford and Harvard, which should tell you quite a bit about where his priorities lie (it appears that Stanford are in the lead right now). Hes a guy that will need to spend a few years in college adding strength and improving his all-around game, but is clearly someone to keep an eye on down the road.

Very much deserving of a mention for his excellent play is Argentinean point guard Cristian Cortes, the clear-cut leader of the South American team at this Adidas Nations camp. Cortes has been overshadowed somewhat at the national team level by another 1990-born Argentinean point guard, Temples Juan Fernandez, but he stood out in a major way here in Dallas.

Cortes is as pure a point guard as youll find, playing the game at an outstanding pace. He sees the entire floor at all times and shows great court vision and creativity getting his teammates involved, often in the form of nifty lobs and bounce passes. His physical attributes are not ideal, as he has average size and underwhelming athleticism, possessing a poor first step and very little explosiveness.

He makes up for it though with great toughness and an extremely high basketball IQ. Cortes is your prototypical feisty Argentinean, a real fighter who is has no problem whatsoever being a little bit dirty if it means helping out his team. He takes charges, grabs at his opponents jersey when the referee isnt looking, and will flop immediately upon contact if he has a chance to take a charge. He managed to annoy the opposition to no avail with the intensity he brought to the table, particularly Marquis Teague, who was completely rattled by him.

As a scorer, Cortes is somewhat limited. He has some ability to change speeds and get to the basket, but his average first step makes things difficult on him, and he struggles to finish around the rim. Cortes knocked down some shots from time to time here, but he appears to be a fairly streaky shooter, although his nice mechanics leave room for optimism in this regard. Defensively, Cortes doesnt have much lateral quickness, but he is an absolute pest on the ball, showing a very high intensity level, and good timing trying to stay in front of his man.

Cortes currently plays for Obras Sanitarias in Buenos Aires, where he has been a pro for a number of years now. Hes probably a name well hear more of in the coming years, particularly on the international level.
Read Next...