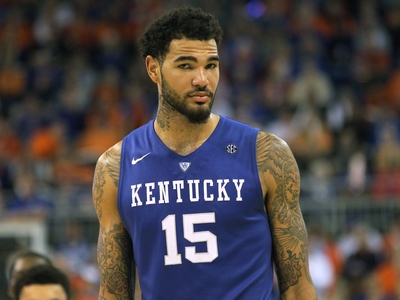 Cauley-Stein suffered a stress fracture in his ankle on March 28th of 2014 in Kentucky's NCAA Tournament victory over Louisville, and had a pin inserted via surgery to repair what Cauley-Stein described then as a cracked bone or a stress fracture." The injury may have occurred in Kentucky's opening game against Kansas State, until he finally heard a pop in his words against Louisville two games later.

Cauley-Stein ultimately elected to return for his junior season, a decision deemed as surprising at the time, but which was clearly influenced by the injury. I was thinking about going (pro) the whole time, until I got injured, Cauley-Stein later said.

Five separate NBA teams we spoke with all indicated varying degrees of concern after consulting with their team doctors this week, with some saying it may cost the Kentucky big man a few spots on draft night. There is some maintenance that needs to be done there, as it's not completely clear whether the injury healed in a proper way. The pin that was inserted is supposed to be sitting at a 90 degree angle, but instead it's at 45 degrees. That, plus some question marks about his background that came up could cause him to drop a few slots.

Even beyond any injury concerns, a more pressing issue that Cauley-Stein is dealing with is the apparent lack of need for a player with his skill-set in the 7-10 range, should he fall past Orlando or Sacramento at 5 or 6. Teams like Denver, Detroit, Charlotte and Miami are all fairly well stocked at the power forward and center positions, and could elect to go with guard or wing players. All of those teams are very active at the moment in trade discussions, according to sources, and could very well be targeted by franchises with a need for a player in Cauley-Stein's mold, such as Oklahoma City for example.

We reached out to Cauley-Stein's agent, Rich Kleiman of Roc Nation Sports, who did not appear to be overly concerned. Willie is not stressing about where he goes in this draft, and teams that have done their research know that there is nothing to be concerned about. Martin O'Malley, a renowned ankle and foot specialist in New York, checked his foot out last week and said he's completely fine. Doctor O'Malley is used by almost every team in the NBA, including working with our client Kevin Durant. The fracture has healed and is asymptomatic. Teams who are overly cautious may want to look into an offseason cleanup if we agreed to it, but currently Willie is 100% pain free and not limited in any way. Any team that really looks at this will have no reason for concern. Teams rely on their doctors, and we rely on ours. I told them they can call Doctor O'Malley and many have already.

Cauley-Stein is currently slated to be picked 11th in our latest mock draft.
Read Next...