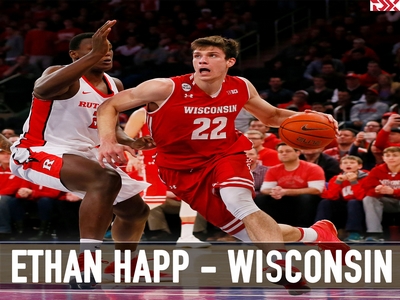 Julian Applebome
@jlapplebome
Julian Applebome analyzes Wisconsin sophomore Ethan Happ, who is playing a significant role for one of the top teams in the country and producing in elite fashion.

Happ, a redshirt sophomore, had an impressive freshman season in which he earned Big Ten Freshmen of the year honors. He has taken his game to the next level this season, though, currently posting the highest PER in the NCAA at 35.7, thanks to impressive per-40 pace adjusted averages of 23.5 points, 14.5 rebounds, 4.4 assists, 3.3 steals, and 1.7 blocks.

At 6'9, Happ is undersized for the Center position he mostly operates from, and will likely need to expand his game somewhat to transition to the pro level. Nearly 40% of his touches come with his back to the basket for Wisconsin, an area he's absolutely lethal at in the college game (0.92 PPP, Synergy Sports Tech), but its difficult to see that translating.

Despite his lack of ideal height, bulk and length for a traditional big man, Happ is one of the most productive players in the NCAA, relying on his ability to finish around the basket with both hands, move the ball with a very high basketball IQ, rebound the ball at a high level, and contribute on the defensive end. His scoring efficiency (61% TS%) and assist numbers (4.4 assists per-40) have taken a big leap from last year in part due to his improved finishing around the basket and his patience passing out of the post. He has shown an adeptness scoring the ball with his back to the basket or out of face up situations, and he handles the ball very well for a player his size.

All of his offense comes inside the paint, and his low free throw percentage (50.5%) is definitely something to monitor, as he will need to stretch his offensive game when he gets to the pro level. Furthermore, scouts will want to get a better feel for his ability to defend power forwards at the NBA level.

Happ doesn't have the flashiest game and is far from a traditional prospect, but he has great fundamentals, footwork, and instincts on both ends of the floor, and has taken full advantage of the huge role that he is playing for one of the top teams in the country. His productivity at the highest levels of college basketball, along with his strong athleticism, basketball IQ and motor certainly give him a chance to carve out a long NBA career.