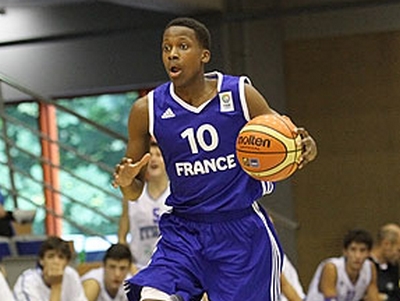 Strengths:
-Excellent size for a point guard at 6-4 (possibly taller)
-Has an excellent frame that will fill out nicely in time
-Pterodactyl wingspan (7-feet?). Huge hands
-Still developing his athleticism, but shows nice potential. Can operate at different speeds. Plays above the rim
-Pure point guard who enjoys creating for others. Averaged 7.2 assists per-40
-Has a great floor temperament
-Shows great potential as a pick and roll player. Finds open man. Reads floor. Drives and dishes. Makes post-entry passes. Runs the show.
-Solid outside shooter, both with feet set and particularly off the dribble. Made 39% of his 3-point attempts on a solid volume
-85% free throw shooter at U18s and Espoirs league
-Tremendous potential defensively with combination of size, length and smarts.
-Closes out on shooters and contests jumpers extremely well
-Gets in passing lanes consistently (3 steals per-40 at U18s, 2.9 in Espoirs league)
-Solid rebounder for a guard
-Very impressive off the court.

Weaknesses:
-Needs to continue to hone his outside shot. Release is somewhat slow. Mechanics are a little bit funky. Jumper went in at U18s, but only hit 30% of his 3-point attempts in the Espoirs league this past season.
-Struggles to score efficiently inside the arc. Career 42% 2P% in 65 games
-Shoots underhanded floaters instead of strong layups. Doesn't know how to fully utilize his athleticism yet. Needs to continue to get stronger, tougher and more explosive with the way he attacks the basket in transition and in the half-court.

Outlook: Born in Belgium to Rwandan parents. Arguably the most talented long-term prospect at the entire event. Only turned 17 during the tournament. Has a great feel for the game to go along with phenomenal physical tools, court vision, defensive prowess and perimeter shooting ability.

Strengths:
-Good size for a guard at around 6-3
-Tremendous frame for a 16-year old
-Excellent wingspan
-Terrific athlete. Very explosive off two feet. Strong first step
-Has good touch as an outside shooter. Can make shots with feet set and off the dribble, even off-balance at times, albeit very inconsistently.
-Not a selfish player. Will find open man at times on simple passes.
-Has tremendous potential defensively. Gets over the top of screens. Gets in passing lanes. Can pressure full-court.
-One of the youngest players to see real minutes at this tournament. Doesn't turn 17 until October.

Weaknesses:
-Much more of an undersized shooting guard at this stage than a combo or point
-Struggles to utilize his athleticism in the half-court. Needs to continue to develop his advanced ball-handling skills. Can't really create for himself in pick and roll or one on one situations
-Court vision is average. Drives into traffic without a plan.
-Shot-selection is questionable at times.
-Wants to pull-up off the dribble for jumpers or settle for floaters instead of taking ball all the way to the rim
-Not a great finisher around the basket. Lacks some touch. Doesn't appear to love contact around the rim. 41% 2P% at U18s.
-Very inconsistent as a shooter. Made just 21% of 3-point attempts at U18s. Similar percentages most of career
-Shoots it differently seemingly every time. Sometimes elbow flails out. Sometimes shoots a push shot. Needs to clean up mechanics and become much more consistent, even if he shows some potential in this area.

Outlook: Had a fairly inconsistent tournament, sometimes looking very impressive and sometime blending in completely. Has great physical tools and upside, but is very raw in many different aspects. Has been on the radar for quite some time (made his first Adidas Nations appearance at the age of 13[!]), but definitely seems to be improving. Will be interesting to see how consistent of a shooter he can become and whether he'll ever get the green light to operate with the ball in his hands and develop his playmaking ability. Still incredibly young, and thus has plenty of time to continue to make strides. Still has two more years of high school basketball left to play. Reportedly already transferring to his third high school in three years in the US after attending Findlay Prep (Las Vegas) and Balboa City (San Diego), which is somewhat concerning.

Strengths:
-Decent size for a point guard at 6-2
-Strong ball-handler. Can operate at different speeds
-Excellent potential on the pick and roll. Usually makes the right reads.
-Very good outside shooter. Can make shots with range both with feet set and off the dribble.
-Tosses in floaters with impressive touch.
-Played up a year at this competition

Weaknesses:
-Has a narrow frame with average length
-More comfortable shooting jumpers than creating efficient offense inside the arc. Took nearly 50% more 3-pointers than 2-pointers.
-Hit just 44% of his 2-point attempts at U18s. Career 39% 2P% in games we have logged
-Tends to avoid contact inside the paint and settle for difficult floaters
-Barely gets to free throw line (16 FTAs in 255 minutes at U18s)
-Average defender. Gets beat off the dribble in half-court. Struggles to get through screens.

Outlook: Young, talented point guard who was among the most productive players at his position at the U18s, despite being a year younger than most of the competition. Shows nice potential in different areas if he can continue to fill out his frame and get a little tougher defensively. Reportedly heading to New Hampton Prep in New Hampshire. Will get recruited at the high major level.

Strengths:
-Has good size. Listed at 6-3 by Real Madrid.
-Possesses nice quickness and the ability to operate at different speeds
-Terrific ball-handler. Can drive left or right. Has excellent footwork and pace
-Outstanding on the pick and roll
-Very flashy passer. Extremely creative and unselfish with the way he gets others involved. Always surveying the floor.
-7.9 assists per-40 at the U18s.
-Shows some touch on his floaters
-Plays with confidence and swagger
-Competitive defensively. Gets in a stance. Moves feet. Good lateral quickness.
-Gets in passing lanes consistently thanks to his terrific anticipation skills (3.2 steals per-40 at U18s, 2.5 in ANGT)

Weaknesses:
-Very light frame. Listed at 156 pounds by Real Madrid
-Not a prolific scorer. Doesn't even really look at the basket. 11 points per-40 on poor percentages (48% TS%)
-Struggles to make jump-shots consistently. Career 8/37 (22%) 3-point shooter in the 625 minutes of game action we have logged. 62% free throw shooter
-Sports a long and deliberate stroke
-Settles for floaters around the rim instead of going strong into contact. Needs to get much stronger.
-Narrow frame and average length limits his potential defensively long-term.
-Tends to gamble in passing lanes and lose his focus at times. Struggles to get through screens defensively at times

Outlook: True floor general with an outstanding knack for creating for teammates. Playing for Real Madrid's junior teams since the age of 13. Team won the Euroleague ANGT championship this past spring. Will need to improve his scoring ability to reach his full potential and play at the highest levels of basketball.
Read Next...