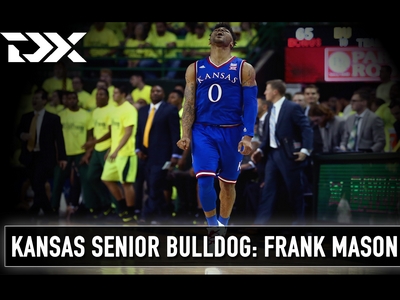 Julian Applebome
@jlapplebome
Julian Applebome analyzes Kansas Senior Point Guard Frank Mason III, and the impact he has on one of the top teams in college basketball.

In his fourth and final season under Bill Self, Frank Mason III has become one of the most valuable players in all of college basketball. Mason arrived at the University of Kansas following a post-grad year at Massanutten Military Academy in Woodstock, Virginia. After a relatively quiet Freshmen year playing behind Naadir Tharpe, Mason took over the starting point guard responsibilities his sophomore year, and hasn't looked back. He has posted an 84 and 17 record as a starter at Kansas, becoming one of the winningest players in the NCAA during that span.

While at 5'11, there are some concerns surrounding Mason's lack of ideal size, there are no such questions regarding his toughness and shot making ability in clutch situations. He is a strong lead guard, with a bulldog mentality, and is fearless attacking the basket and drawing contact. He can play over aggressively at times and force the issue, but he has shown improvement with his decision making and shot selection as his career moved on. He is shooting a career best 50.4% from deep on 4.4 attempts per game, and has become one of the most dangerous shooters in the country, both off the dribble and with his feet set.

Mason is facing an uphill battle heading towards the NBA Draft because of his size, age, (turns 23 in April) and struggles scoring efficiently inside the arc, but it is hard to look past his overall improvement and consistent dominance in the Big 12. He will get plenty of looks in the second round, and even if he goes undrafted, ala Fred VanVleet or Yogi Ferrell, he certainly will have opportunities to make a roster and show he can play a role as a backup.