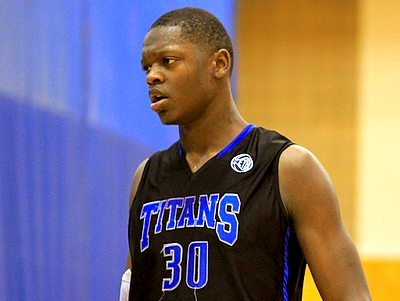 Strengths:
-Excellent size for a point guard/combo guard
-Very strong frame (weighed at 214 pounds)
-6-8 wingspan
-Great ball-handler
-Uncanny knack for creating offense with the ball in his hands
-Extremely advanced instincts for scoring, creating
-Tremendous finisher around the basket. Bounces off opponents, finishes through contact.
-Dribbles and finishes with both hands
-Very good in transition
-Terrific full-court passes
-Can make shots off the dribble and with range, in impressive fashion
-Good potential on defense when locked in.

Weaknesses:
-Relies too much on strength at times simply trying to bully his way to the basket. May need to adapt style somewhat against older, more physically mature players
-Outside shot prone to streakiness
-Needs to improve ability to play without the ball
-Gets tunnel vision. Overdribbles excessively. Loose with the ball. Forces issue. Very turnover prone at times
-Up and down with energy level
-Doesn't always compete on defense. Lets previous play affect him. Fails to get back.
-Body language can be very poor. Complains to teammates, referees. Needs to do a better job dealing with adversity.

Outlook:
Arguably the most talented guard in all of high school basketball. Top-shelf NBA prospect. Will be a game-changer from day one in college. Needs to improve in the areas most superstar prep players do as the competition stiffens. Has had a lot of attention come his way from a very young age. Can't let that go to his head at this early stage of his development. Needs to find a real position? If he's a point guard, will need to improve playmaking ability creating offense for teammates. If he's a shooting guard, must improve ability to play off the ball.

Strengths:
-Measured 6-10 in shoes, and 240 pounds at the Nike Skills Academies
-Outstanding athlete in terms of fluidity, agility and explosiveness
-Great first step. Tremendous ball-handler for size, with excellent body control slithering his way around opponents
-Rare combination of finesse and power
-Unstoppable mismatch threat at high school level. Too strong for forwards to handle inside, and too skilled for big men to stop from the perimeter
-Draws fouls, gets to the free throw line prolifically
-Spins, and finishes through contact, bounces off opponents
-Has a back to basket game. Can post up
-Tremendous footwork for a player his age
-Absolutely lethal in transition
-Competes on defense
-Willing to compete inside the paint
-Done a great job with body

Weaknesses:
-No real fundamentals on defense
-Has the type of body that can get out shape quickly
-Should continue to expand the range on his jump-shot in time. Will make him much more dangerous in the half-court if opponents need to respect him out to the 3-point line.
-Turnover prone at times. Tends to just bully his way to the basket, usually works at high school level, won't be the same story in college

Outlook:
Extremely unique prospect due to his combination of size, strength, scoring instincts and ball-handling skills. Very difficult to find players with his skill-set, at any level of competition. Has work to do, on the defensive end in particular, but he's clearly a top-notch prospect for the NBA.

Strengths:
-Phenomenal body
-Phenomenal athlete
-Tremendous asset in transition thanks to the way he runs the floor and can finish around the rim
-Pogo stick on offensive glass
-Can make the extra pass
-Can create off dribble from the perimeter with simple ball-handling moves
-Elevates incredibly well around the basket
-First step is very strong
-Not the tightest handle, but can work on that
-Has some back to the basket skills.
-Footwork, pivots. Uses quickness, fluidity
-Really competes on defense
-Dives on floor for loose balls. Consummate team player
-Makes plays on defense thanks to his athleticism
-Can block a shot
-Plays with passion. Very positive presence on the floor
-Always encouraging teammates
-Incredibly young, still only 16 years old

Weaknesses:
-Has good, but not great size for a power forward at 6-8, with a 6-11 wingspan
-Long, ugly stroke from 3-point line
-Really needs to work on perimeter shooting ability
-48% FT line at EYBL
-Settles for ill-advised jumpers at times
-No left hand

Outlook:
A modern power forward who shows flashes versatility offensively, but is still improving his skill-level and polish. Incredible athlete who has drawn some comparisons to Blake Griffin due to his complexion and highlight reel dunking ability. Struggled with injuries in the tournament we watched him, but still gave 100% every moment he was on the floor regardless. Has excellent long-term potential, especially if he can develop a consistent jump-shot. One of the youngest players in this high school class.

Strengths:
-Good size for a wing, measured 6-6 ½ at the Nike Skills Academy
-Very long arms, 6-11 wingspan
-Solid frame
-Left handed
-Very low, but quick release on jump-shot
-Elevates well creating separation from defender to get pull-up jumper off
-Can make shots with a hand in his face
-Just turned 17. Young for his class. Could still be growing?
-Very good potential on defense
-Solid rebounder
-Makes extra pass
-Plays with good energy level. Seems to be a good teammate

Maybe will get more athletic. When in rhythm he's terrific.... Can pass.

Weaknesses:
-Good, not great athlete at this stage
-Doesn't have a great first step, nor is he an incredibly explosive leaper
-Not a great ball-handler
-Can't consistently create good shots around the basket in the half-court at a high rate yet
-Needs to improve right hand
-Can make 3-pointers but not quite a marksman just yet. Will take some bad shots on occasion
-Looks comfortable taking a back seat at times
-Lacks experience. Still figuring out how to use his talent consistently
-Gambles a lot on defense

Outlook:
Emerged this summer as a top-10 prospect in the class according to the recruiting services. Looks the part of a top prospect with his outstanding size, length and frame, but doesn't consistently play like one yet. Could still be growing into his frame and likely hasn't reached his peak yet athletically.

Strengths:
-Good size for a point guard at 6-2, with a 6-4 wingspan
-Incredibly fast with ball
-Outstanding ball-handler
-Great in transition
-Can drive left or right
-Can play pick and roll
-Explosive finisher around the basket
-Good timing on drive. Can play at different speeds
-Can create for others in drive and dish situations
-Can make shots from outside
-Can pull-up off the dribble
-Has developed an in-between game
-Never changes his face. Never looks rattled
-Can put outstanding pressure on the ball defensively
-Gets lots of steals with his quick hands
-Brandon Knight/Ty Lawson-esqe.

Weaknesses:
-Needs to continue to add strength to his 168 pound frame
-Struggles to finish around the basket at times
-Perimeter shooting has improved, but still needs work
-Shooting mechanics aren't great. Release is low, and slow
-Has room to improve as a playmaker in the half-court
-Doesn't possess great leadership skills. Not a great communicator amongst teammates.

Outlook:
Speedster in the Ty Lawson mold. Can get to wherever he wants on the floor, both in transition and in half-court situations. Top-shelf point guard prospect.

Strengths:
-6-9 in shoes
-Great frame (224 pounds)
-Good rebounder. Goes after every loose ball with purpose
-Very reliable finisher. Quick jumper. Can take contact
-Some perimeter skills
-Can make a mid-range jumper
-Can attack man off dribble a little in straight line thanks to his very quick first step and aggressive mentality
-Can pass out of the post
-Good hands.
-Good offensive rebounder
-Decent footwork. Some spins
-Wiry athletic guy
-Shot-blocker

Weaknesses:
-More smooth than explosive
-Average wingspan
-No left hand
-Not much of a post game
-Average conditioning level

Outlook:
Big man with solid size, a great frame and a pretty versatile skill-level. Plays with good energy. A bit rough around the edges, but has plenty to work with.

Strengths:
-Measured 6-9 in shoes
-Has a frame that should fill out nicely in time
-Extremely fluid, agile athlete
-Nice quickness and leaping ability
-Very good finisher around the basket
-Handles the ball extremely well in transition for his size
-Can create shots from the perimeter with solid ball-handling skills
-Can make a mid-range jumper
-Can operate inside the paint with some basic post-moves. Decent footwork
-Very active defensively. Steps out on perimeter
-Great timing for blocks. Contests everything around the paint

Weaknesses:
-Only 201 pounds
-Doesn't have strength to do much with back to basket yet, but tries
-Average wingspan at 6-10
-Needs to improve left hand
-Can continue to improve his polish as a shooter
-What position will he defend long-term?

Outlook:
Extremely skilled and versatile face-up power forward with major upside. A tweener in a good way. Moves very well and shows an intriguing skill-set for a player his size. Definitely a player to keep an eye on long-term, as he shows some very unique and coveted attributes. Has a reputation for not always playing with the same intensity level, but that wasn't really the case when we saw him.