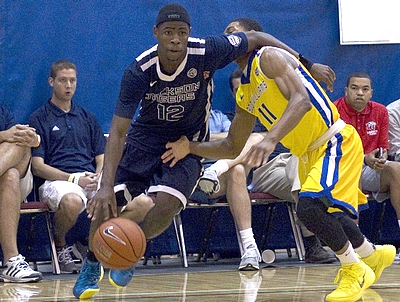 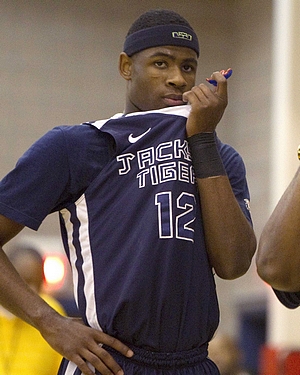 Strengths:
-Arguably the best scorer in all of high school basketball. Averaged 24 points in 28 minutes per game at the Nike EYBL, best in the league both per-game and per-minute, despite being a year or more younger than virtually everyone he played
-Extremely athletic. Has a great first step and is very explosive
-Excellent body control in the lane
-Can operate at different speeds
-Terrific ball-handler. Can create his own shot driving left or right
-Very good footwork on his drives. Stops and starts, has all kinds of moves and is extremely difficult to stay in front of
-Great in transition
-Doesn't have any issues driving right into the teeth of the defense. Takes hits at the rim and finishes. Extremely tough for a player his age (16) and weight (176 pounds)
-Gets to the free throw line at a great rate
-Creates excellent separation for his pull-up jumper. Can stop on a dime and elevate. Knows how to use his body to keep his defender off-balance
-Very reliable shooter with his feet set
-Strong rebounder for his position
-Can find the open man. Court vision is not terrible. Generates a decent amount of assists
-Only 16 years old. Won't turn 17 until February

Weaknesses
-Doesn't have great size or length for a shooting guard. Measured 6-4 in shoes with a 6-4 ½ wingspan
-Somewhat of a one man show at the high school/AAU level. Shot-selection and decision making isn't great
-Made just 44% of his 2-point attempts at the EYBL. Reliance on difficult long 2-point attempts hurts his efficiency
-May struggle defensively against bigger, stronger shooting guards

Outlook: Scoring machine in the Monta Ellis mold. Has an amazing knack for putting the ball in the basket. Talent is off the charts. Does not look like a selfish player, but may be picking up bad habits in the shoot-first ask question later environment of AAU.

Strengths:
-Terrific frame for a 16 year old
-6-9 in shoes with a 7-1 wingspan
-Very good athlete
-Fantastic rebounder on both ends of the floor. Averaged 16.3 rebounds per-40 in 18 Nike EYBL games this season
-Very good finisher around the basket. Quick off his feet. Good second bounce. Dunks everything
-Gets to the line at a very good rate
-Soft touch around the basket
-Some budding post moves and ball-handling ability
-Good timing as a shot-blocker. 4.3 blocks per-40 at the EYBL

Weaknesses
-Still raw offensively
-Has a great frame but still a long ways away from filling out (expected considering his age)
-Doesn't have the strength to establish himself with his back to the basket
-Very left hand dominant with his finishes. Must continue to work on off-hand
-Very poor free throw shooter. 53% from free throw line at EYBL

Outlook: Young, developing big man with significant upside. Still in a very early stage but shows a lot of intriguing attributes to go along with a terrific physical profile.

Strengths:
-Very good size
-Mobile big man. Fluid and agile. Can run the floor and play above the rim
-Very skilled for his size
-Can put the ball on the floor in the half-court and handle in the open floor. Good first step. Can face-up for 15-17 feet and finish with nice body control
-Good shooting mechanics and touch. Has solid potential with his mid-range jumper
-Solid feel for the game. Very good passer
-Nice footwork. Quick spin moves
-Good timing as a shot-blocker

Weaknesses
-Does not have a great frame. How much stronger will he get?
-Doesn't look comfortable operating with his back to the basket
-Likes to settle for jumpers, but not consistent from outside yet
-Lacks somewhat of a meanstreak. Doesn't box out. Gets pushed around quite a bit. How tough is he?

Outlook: Agile and skilled big man with a good feel for the game. Lacks a degree of toughness and somewhat stuck between the 4 and the 5 positions.

Strengths:
-Strong frame. Huge shoulders. Big hands. Long arms (7-1 wingspan)
-Terrific scoring instincts. Averaged 27 points per-40 at the Nike EYBL shooting 58% from the field
-Very effective with his back to the basket. Has good footwork, soft touch, and a variety of moves
-Can score with hook shots, step-throughs and drop-steps. Uses both hands inside the paint
-Catches everything thrown his way. Very soft hands
-Can handle the ball a bit with either hand
-Intelligent, creative all-around player. Very nice feel for the game

Weaknesses
-Doesn't have great height at 6-8
-Conditioning is not great. Weighed 270 pounds at the LBJ Academy in 2013
-Average athlete. Plays below the rim. Doesn't run the floor that well
-Struggles to finish over length
-Somewhat turnover prone. Doesn't do a great job recognizing double teams. Forces the issue at times
-Poor defender. Doesn't give great effort

Outlook:Undersized big man somewhat stuck between the 4 and the 5. Has terrific scoring instincts. Really knows how to play. Will need to continue to work on his body. Has the type of body that can get out of shape quickly. Can bully less physically developed players at the high school level. Will need to keep improving his frame and skill-level as other players his age catch up.

Strengths:
-Very strong frame for his age. Long arms. Big hands. Solid athlete
-Good shooting mechanics from the perimeter
-Very effective in transition
-Loves to play above the rim
-Physical player. Has a bit of a mean streak
-Excellent potential defensively with his strong frame and long arms
-Good timing as a shot-blocker

Weaknesses
-Doesn't have any real concept of how to operate in a half-court setting
-Shot-selection, decision making is poor
-Regularly settles for tough, off balance jumpers
-Average ball-handler. Cannot create his own shot
-No left hand
-Doesn't use his mature frame to his advantage inside the post
-Poor fundamentals on defense. Doesn't get into a stance. Doesn't put much effort in

Outlook: Physically mature forward somewhat stuck between positions. Likes to play on the perimeter but doesn't have the skill-set to do much besides shooting jumpers. Needs to do a better job of channeling his energy and focus.

Strengths:
-Good size for a wing. Measured 6-6 with shoes
-Very good athlete. Explosive. Can play above the rim with ease
-Good scoring instincts
-Solid perimeter shooter. Nice shooting mechanics and soft touch. Made 38% of his 3-point attempts at the Nike EYBL. Reliable with feet set
-Good in transition
-Very quick first step. Gets to the free throw line at a high rate
-Makes plays defensively thanks to physical tools. Can be outstanding here if he commits to it

Weaknesses
-Inefficient scorer. 39% from 2-point range at Nike EYBL
-Average ball-handler. Rarely gets all the way to the basket in the half-court
-Settles too often for off-balance floaters and other low percentage shots inside the arc
-Needs to keep getting stronger, which should help him become a better finisher inside the paint
-Doesn't know how to use his body to create contact.
-Does not have a great wingspan (6-7 ½)
-Has an ugly looking stroke shooting off the dribble.

Outlook: Developing wing prospect with good physical attributes and a nice stroke from outside. Shows potential as a scorer, but must improve his ball-handling skills and pull-up jumper. Has nice upside to continue to develop long-term.

Outlook: Incredibly gifted prospect physically. Reportedly very intelligent off the court as well. Still very young, but clearly has a great deal of upside if he continues to work and improves his skill-level and feel for the game.

Outlook: Streaky scorer who can get hot quickly and knock down a barrage of outside shots. Talented prospect missing a good amount of polish and experience. Reclassified and is now much older than most of his classmates. Will turn 20 during his freshman season in college.

Weaknesses
-Average size for a wing at 6-5
-Short arms (6-4 ½ wingspan)
-Doesn't have great mechanics on pull-up jumper
-Low release point on shot, but very consistent with his stroke
-Could struggle defensively at the next level

Outlook: Shooting guard who does a little bit of everything. Has a very good feel for the game. Looks like an excellent college prospect at the very least.

Strengths:
-Only 6-8 in shoes, but has extremely long arms (7-3 wingspan)
-Very athletic. Runs the floor well. Plays above the rim with ease
-Excellent finisher around the basket
-Highly competitive player. Stays with plays
-Very good offensive rebounder
-Can block shots
-Willing to do the dirty work. Gets after it defensively

Weaknesses
-Undersized for a center 6-8
-Not overly skilled. Can't do much in a half-court setting
-No post moves or jump-shot

Outlook: Hard-nosed, athletic big man who makes a major impact defensively and crashing the glass. Doesn't have a very high skill-level offensively, but finds other ways to contribute with his energy and physical tools.

Strengths:
-Good size. Very long arms. Big hands. Good shoulders
-Frame that should fill out significantly in time
-Shows a nice skill-level for the development stage he's at
-Good hands
-Solid touch around the basket. Some footwork
-Can make a mid-range jumper
-Can pass out of the post a bit

Weaknesses
-Frame is very underdeveloped at this stage
-Struggles defensively. Gets backed down inside the paint. Needs to get stronger and tougher
-Doesn't have much of a post game

Outlook: Developing young big man with some very intriguing attributes. A long ways away at this stage, but has plenty to work with.

Strengths:
-Has a very strong frame, big hands and long arms.
-One of the best rebounders in college basketball. Averaged 17.1 rebounds per-40 in 18 games for the team that won the Nike EYBL, playing up one year
-Tremendous hands. Catches everything. Outstanding anticipation skills
-Very scrappy. Dives on floor, always in the mix for loose balls. Constant presence on offensive glass
-Can score inside the paint. Very good touch around the basket. Made 69% of his 2-point attempts in the EYBL
-Blocks some shots thanks to timing and hands.

Weaknesses
-Not a great athlete. Plays below the rim
-Could stand to lose weight, improve conditioning
-Average defender. Struggles when stepping out onto the perimeter.

Outlook: Ultra productive big man in the DeJuan Blair mold. Was a major factor in his AAU team winning the Nike EYBL playing against significantly older competition. Not the most athletic big man around, but looks destined to have a great college career at the very least. Appears to be a much better prospect than the recruiting services are giving him credit for.

Weaknesses
-Average height, frame and wingspan
-Not a great ball-handler. Struggles to create own shot effectively
-Not as good shooting off the dribble as with feet set

Outlook: Fundamentally sound shooting guard with good athletic ability. Excellent outside shooter who contributes to his team's ball-movement and puts a solid effort in defensively. Doesn't have great size, strength or length, but at the very least looks like an excellent college shooting guard prospect.
Read Next...