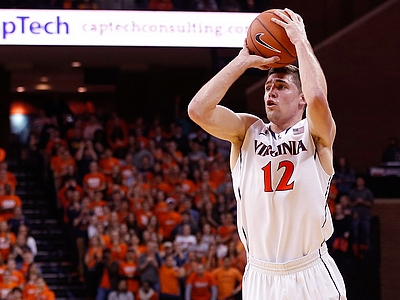 Joe Harris ended his collegiate career at the University of Virginia by leading the team to an ACC regular season title and conference title while earning a #1 seed in the NCAA tournament, being named to the All-Conference Third Team and the ACC tournament MVP. Although the Cavaliers ended up losing to Michigan State in the Elite 8, Harris had a solid individual season, even if he regressed in some areas statistically. He now turns his attention to his professional career, as he tries to show his skills can translate to a NBA career. 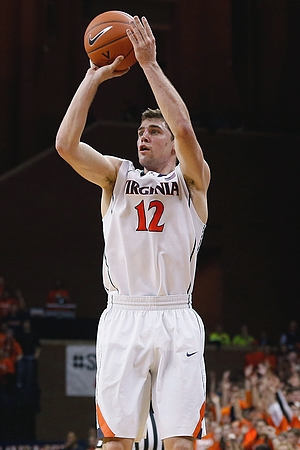 After declining to participate in the Portsmouth Invitational Tournament, Harris recently competed with the shooting guards at the NBA draft combine. While he measured well at 6'6 2.5 in shoes, the rest of his athletic tools left much to be desired. His 6'6 wingspan was the shortest among wing players, while he did not test particularly well athleticallywhich is not particularly surprisingly. However, his terrific perimeter shooting ability was on full display, where he ranked among the best shooters at the event, in almost every category on the floor. He also fared well in the competitive action, creating for himself off the dribble more than expected, even if he struggled at times defensively.

Looking back at his senior year, the majority of Harris' offense came off of screens, as 31.8% of his offensive possessions (in the top ten in the entire nation) had him utilizing screens to free himself up. He is in constant motion off the ball, and does an excellent job of making quick cuts to set up his defender to run into the screen and then coming off the screen tightly to create separation. He needs to continue his precision cuts to find space against more athletic defenders at the next level. Harris is an excellent shooter coming off screens, as he shot 41.8% on such attempts last season, showing an ability to quickly gather himself and catch and shoot on balance, even with a defender in his face.

Harris' shooting is his biggest potential asset to NBA teams, which he showed at the combine by making 16 of 25 NBA spot up three pointers. He complemented this by shooting 40% on three pointers in his senior season, his third collegiate season shooting at least 40% from long distance, while posting an overall effective field goal percentage of 54.7%. It appears that his shooting skill will translate to the next level, the only question will be whether he can create space to get his shot off in the NBA.

Outside of his three point shooting, Harris can contribute offensively in other ways. Harris is able to beat defenders in a straight line when they run at him after catching the ball at the perimeter, showing a deceptively quick first step, especially after getting the defender to leave their feet with an effective ball fake. He was able to get to the rim and finish in college thanks to his strong frame, but may have trouble having similar success at a NBA level. He is strictly a straight line driver and will be unable to get around the help defense and will also likely struggle to finish over the length of the NBA rim protectors.

Harris is a good creator for his teammates when coming off screens, finding the open teammate when multiple defenders swarm him. His 3.5 assists per 40 minutes pace adjusted were the second highest among small forwards this season, as he has nice vision to find his teammate and then delivers an easily catchable pass to put them in a position to score. He is generally a smart, unselfish player who understands his role and could very well endear himself to half-court oriented coaches who need players in his mold to operate their system effectively.

While Harris demonstrated some positive offensive skills both throughout his college career and at the draft combine, the deciding factor for his NBA career likely comes down to the defensive side of the ball. His limited athletic skills put him at a disadvantage from the start, and he will need to prove he can compete on this end while not being a major liability. Tony Bennett's defensive system has prepared him as much as possible for the next level and Harris looked comfortable making the right rotations and being in the right position on the floor. However, he was often unable to complete the defensive possession, as his lack of length and lateral quickness allowed players to score on him far more than NBA scouts would have liked.

Harris' offensive potential will lead NBA teams to consider drafting him in the second round of the upcoming draft but he needs to show he can compete athletically with fellow draft prospects in pre-draft workouts, especially on the defensive end to cement his draft position. His shooting will be a useful tool for NBA teams if he can prove he belongs in a rotation.
Read Next...