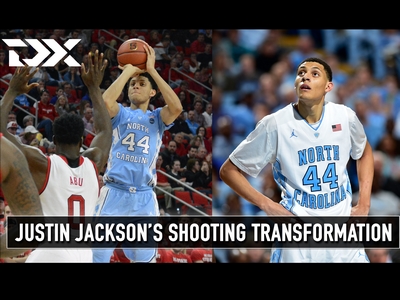 Soon-to-be 22-year-old UNC forward Justin Jackson has helped himself and his team by transforming into a much more dynamic shot-maker after two somewhat underwhelming years, relative to expectations (RSCI #9).

The often-reserved 6' 8 junior, who had been homeschooled since fourth grade before moving to Chapel Hill in 2014, has emerged as the Tar Heels' most lethal scorer, while leading the storied program to an ACC regular season title in the process.

Jackson's much-improved shooting stroke (29.7% from three during his first two seasons) is without a doubt the driving force behind his breakout season  where he's averaging 22.7 points per 40 minutes on 51.3% from two and a career-high 39.0% from three. Jackson ranks third among DraftExpress Top 100 prospects in made threes per 40 minutes (behind only Malik Monk and Andrew White) and is doing so filling it up from the perimeter in a variety of ways.

Jackson has already made 19 more threes this year than he did in his first two years combined, and his efficiency numbers, especially off the catch, have skyrocketed. His shot preparation, balance, speed of his release and wrist action have all improved considerably in spot up situations, and his confidence is at an all-time high because of it.

Early in his career, Jackson could be seen toeing the 3-point line and trying to guide the ball to the rim, but thanks to his increased role and more polished stroke, the lanky wing is now regularly pulling up from beyond NBA range with far more confidence than he's ever shown in the past.

Here's a look at what Jackson has done to improve his catch and shoot jumper efficiency by 0.26 points per possession this season.

Jackson has also become a real weapon sprinting off of screens and playing out of dribble handoffs. He's always been dangerous working off of pin-downs because he has positional size, a reliable floater, and a scoring knack with his defender locking and trailing.

This season Jackson has taken his off screen' scoring to a new level, however, as he's comfortable sprinting into catch and shoot threes turning right or left, and does a great job of relocating for quick handoff pull ups after giving up the ball. Jackson's ability to read his defender, shoot it with range, and curl or straight line drive to floaters make him a really tough cover operating off the ball in quick-hitting actions.

Here's a look at how Jackson has evolved as a shooter on the move:

While he's still not much of an isolation or pick and roll shot creator  limited by a high handle, thin frame and struggles shifting gears with any force  Jackson has made strides as a pick and roll shot maker, especially when the on ball defender goes under.

Defenses can no longer dare Jackson to shoot off the bounce from three, and his career-best 0.98 points per possession out of pick and roll is a result of his more dynamic ball screen game. Jackson, who also scores 1.06 points per possession out of isolations (though only 5.9 percent of his offense), has become more capable in one-on-one situations as well. He uses sharp jabs and ball shows to create space and now has the range to make him a threat playing off of hang dribbles, although that's still not a major part of his game. Jackson may never be a late-clock, go get us a bucket' style of scorer, but his ability to at least keep the defense honest out of ball screens and off the dribble (career-best 0.86 points per possession on pull ups) has helped the offensive flow and turned him into a more complete scorer.

Although it has taken him a little longer than expected, Jackson has developed into an All-American type player this season, thanks in large part to his added consistency and versatility from the perimeter. He still reverts back to his old habits at times, and shouldn't quite be considered a knockdown shooter just yet, but he's taken a big step in the right direction and has improved his draft stock tremendously in turn.
Read Next...