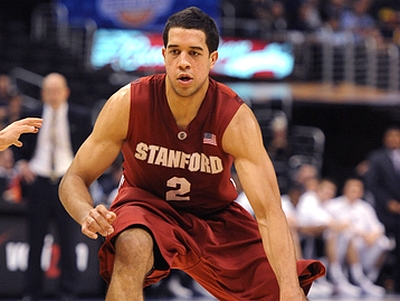 Landry Fields
@DraftExpress
Whats up, Draft Nation, allow me to informally introduce myself to you. My name is Landry Fields, and if you dont know me, which many of you may not, I am a senior at Stanford University.

Individually, I had a very good last year at Stanford; however, the goals and aspirations I had in terms of the team fell way short of expectation. But Im not here to bore you with a long introduction of myself, but rather give you a little insight into my world as a potential player who could possibly hear his name called in this upcoming NBA draft.

Outside of what most experts think they know about players, almost none of them have had the chance to actually play against the players they love to write about; I have. Does that make me an expert? Absolutely not, but I certainly can give you little intricate opinions on players solely based on the fact that I have played against them at one point or another. 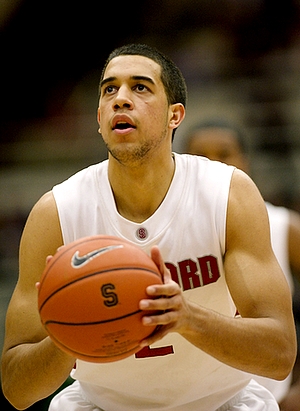 For this particular blog, I wanted to share my experience of playing in the pre-season tournament known as, The Cancun Challenge. At the tournament I played two games; the first game was against Virginia and the second was against powerhouse, Kentucky. This was a, how can I put it, extremely unique tournament. Everything from the teams I played against, to the court I was playing them on, there was something to be said.

Day one came, and after hours of traveling, we only had a few hours to grab a bite to eat and get situated in our rooms. We stayed at, what I certainly would call, a luxury resort.

To me, everything was cool about the place until I saw what kind of courts we had to play on, and where the courts were located. The practice gym was in an enormous ballroom just a short walk from where our rooms were and the game gym was upstairs from the hotel lobby in another ballroom with the kind of bleachers you can find at a minor league baseball field at your local park.

Luckily, no game there came down to a last second full court shot because I am pretty sure Cancuns idea of a jumbo-tron, or what most people would call a chandelier, would certainly allow for an extra defender on the court.

Teams trickled in throughout the day, but we had no time to sit there and size up any future opponents. One, we had to get ready to play Virginia, and two, our presence off the court didnt have the same bulk as we tended to think it did.

Anyway, Virginia was a talented team with a new head coach in Tony Bennett who recently came from Washington State. In this game, I played against a player who at one point or another was or is on a few draft boards, Sylven Landesberg.

Landesberg was a pretty talented player and had a decent game, however didnt really have the kind of game most would expect out of him against us. He had pretty good size for a two guard and I could see he had a decent feel for the game.

This was a game we had to win because the winner would take on Kentucky the following day and Stanford needed to get some national attention and turn some heads early if we were ever going to have a shot at the tournament. The game remained close throughout and Virginia had some pretty good talent outside of Landesberg.

Mustapha Farrakhan was probably one of my favorite players to against that whole tournament. I thought he gave great energy and solid minutes for his team. Not to mention, Jeff Jones was strokin it that game. However, even through the great play out of their squad, we managed to pull it out. We beat Virginia and would go on to face Kentucky and their crowd.

Youre probably asking yourself, their crowd? Let me tell you, after the amount of blue that piled into Cancun that weekend, one might think they were watching a rerun of the Smurfs. I had never seen such loyal fans to one school. Im pretty sure the state of Kentucky shut down for those few days, just so everyone could come watch the team play in Cancun and not walk into work Monday morning with a pink slip on their desk.

Kentucky had an army. Stanford had a family meeting. The only red in the crowd that game came from coaches wives, children or players parents. From the start, most everyone in the nation believed there was just no way we could match up; not to mention, Kentucky, I believe, was the only unbeaten squad left in the country, and rightfully so.

The Wildcats had five, count em FIVE, future NBA talents in Eric Bledsoe, Patrick Patterson, Daniel Orton, DeMarcus Cousins and John Wall. Now being the Draft Nation that you are, and a well respected one at that, some might figure or have opinions that maybe one of those five arent NBA ready or whatever.

After playing them and watching them (they were on ESPN every other day), I honestly feel like they all will make it. Just because I think they all will make it, doesnt mean they all balled out against Stanford in Cancun. No sir. Credit to them for a great win, but if we had just taken care of the ball a little bit more and knocked down some throws, their loss would have come much earlier than their meeting at South Carolina. But past is past.

My dealings with those guys is somewhat altered from one man to the next.
Bledsoe is a tremendous athlete who had an OK game against us. It wasnt bad, but it wasnt outstanding. However, he does have an extreme amount of talent. I love his intensity for the game though. While sometimes he can let his emotions get the best of him, his passion goes unmatched and it showed against us. A few plays he just wanted it more than us.

Patrick Patterson had a good game. We were a bit short this year in terms of our big men because we lost a key element in Josh Owens, but we had some walk-on big men that had a good year for us, and I think played Patterson pretty well. But at moments during the game you could just see the physicality and athleticism he possessed and no one was able to really match it.

Daniel Orton, if you havent played against him, is solid. Many people, and by people I mean crowds who think they know basketball, but truly dont, only look at his numbers this year and try to judge based off of that. Well after playing him, good for him for leaving. While I think next year he would kill for Callipari, he was solid against us.

I remember a play in particular where I got past my defender on the wing and saw Daniel Orton at the basket. Ok, its a televised game, lots of people are watching, if I go hard enough Ill at least get fouled. Nope. I took one last dribble after getting by my defender and decided I wanted to dunk on Orton, but he gladly rejected my request. He had a presence all game in the paint, which made me have to alter a few shots when I got into the lane. Hes big and a great secondary helper for them. I actually like him a lot. Any team would have loved to have him this year, I know we would have.

DeMarcus Cousins, if Im being honest, I didnt think he would have been where he was at now after we played against him. Although just a freshman, I thought our bigs, most of whom are walk-ons, played him very well. Now dont get me wrong, that man has blossomed after his game against us. He definitely showed great potential when we played him, but I didnt think hed get to where hes at now, well at least not this year.

Finally, John Wall. There are many words to describe Wall, but the word I have chosen is, winner. No one had more hype in the nation than this guy so when we heard we would have a chance to play him we gladly accepted the challenge. His game against us ended just OK but I dont think that reflected his entire game. His last five minutes going into overtime were outstanding. Thats why I call him a winner. Even in a game where he wasnt playing all his best, he still found a way to will his team to victory. Not to mention hes a pretty decent defender. I remember 4 or 5 different guys having to guard me that game and he was one of them. Anyway, he was the one to knock down the clutch free throws for them to send it into overtime. Then he proceeded to have a great last five minutes. Game over.

For some reason, people always talk about how we almost had Kentucky. To the people who know basketball, almost doesnt cut it. We lost. They won. You cant take any credit away from those guys. The best teams find ways to win even when their star-studded cast isnt performing on all cylinders. We had our chances to win that game, but didnt. No reason to hang our hat on almost beating someone; thats a losers mentality, not a characteristic of a championship caliber team. But from that game we learned a great deal about who were as a team and the capabilities we could possess.

Next time, Ill take a step away from the whole college routine and leap into the early world of things you have to go through when you are a guy in my position and want to play in the NBA. Ill speak about a time in basketball where the term, playing together as a team, doesnt hold much value even though if players did it, theyd be looked at in a much higher light; you guessed it, next time Ill give you my insight into the time I had at the all-NCAA senior draft camp in Portsmouth, Virginia.
Read Next...