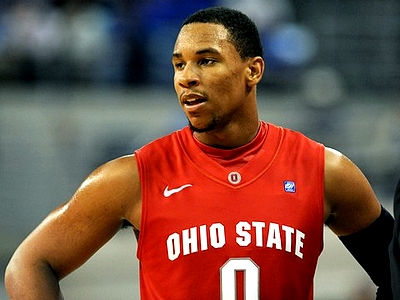 The most productive freshman in the NCAA statistically, Jared Sullinger hasn't had any issues making the transition from high school standout to college star. 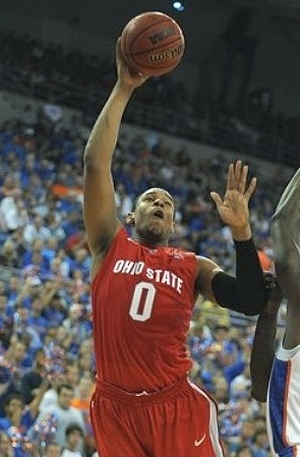 Playing for a still-undefeated (8-0) team ranked second in the nation with two impressive road wins over Florida and Florida State, Sullinger has already established himself as Ohio State's clear-cut go-to guy, and has been ridiculously efficient in doing so. Averaging 24.4 points per-40 minutes pace-adjusted, shooting 62% from 2-point range, getting to the free throw at an outstanding rate, and coming off a 40-point outing last week, Sullinger has been everything he was billed as coming into college and then some thus far.

We've been writing about Sullinger for the better part of three years now, and much of what we said about him back then continues to ring true today.

The biggest change we've seen from Sullinger over the years revolves around his body, as he's slimmed down considerably from when we first saw him. He still hasn't reached his maximum physical potential, but the strides he's made are very encouraging and show that he's willing to put the time in and make the sacrifices needed.

While Sullinger continued to show more and more perimeter skills every time we saw him in high school, he's been primarily an inside threat for Ohio State this season. This makes sense from both an individual and team standpoint, as he's flashing a highly coveted skill from an NBA perspectivea polished back to the basket gameand has proven to be downright unstoppable for college defenders. This is a big reason why his team hasn't missed a beat from last season despite the loss of last year's 2nd overall pick, Evan Turner.

40% of Sullinger's offense comes in post-up situations according to Synergy Sports Technology, and he ranks amongst the most efficient back to the basket players in the NCAA, scoring on over 50% of his field goal attempts when creating his own shot inside and getting fouled on nearly a quarter of his possessions.

The biggest key to Sullinger's dominance has been the opposition's inability to keep him outside of the paint. While he's lost a good deal of weight, he's still retained all of the strength in his lower body that makes him so difficult to handle one on one. With his terrific base and low center of gravity, Sullinger is constantly working to establish better post-position down low. Tough and extremely aggressive, he's not afraid to simply put his ass into a defender and go to work until he gets to where he wants to on the floor.

Once there, he has incredibly soft hands to catch pretty much anything thrown his way and an unbelievable awareness for where he is on the court relative to his teammates and opponents. Patient and confident, he has extremely polished footwork and excellent body control, showing a wide array of spins and counter-moves that help him create even higher percentage shots. With his feathery touch and ability to shoot with either hand, he doesn't miss very often despite the fact that he's rarely getting his shot off over the top of the defense. When the double-team inevitably comes, he's extremely quick to recognize rotations and does a very good job of finding open teammates spotting up on the wing.

With his excellent motor and insatiable hunger to score, Sullinger doesn't relent for even a minute when he's on the court, putting a tremendous amount of pressure on the opposition to alter their game-plan to stop him, fouling out entire frontcourts, and getting his team into the bonus early and often.

Sullinger's hands are never more impressive than when watching him operate on the offensive glass. With his wide frame, solid length (7-1 ½ wingspan), excellent fundamentals boxing out and terrific timing anticipating where loose balls will end up, Sullinger already has a major advantage over opponents. The fact that he has magnets for hands make him a Kevin Love-like force of a rebounder at the college level, though, ranking him #1 by a wide margin amongst freshmen in this category, and 7th overall on a per-minute basis. Even though he gets his shot blocked a decent amount, he's got such great instincts that he's often able to follow up and get himself a good look after quickly snagging the loose ball. 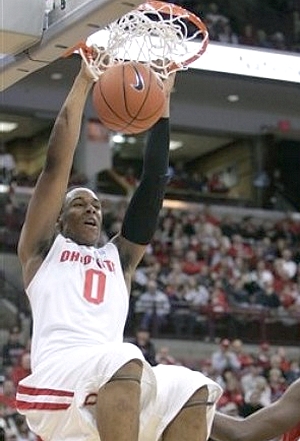 Sullinger is very effective diving to the rim and finishing for many of the same exact reasons, giving him great potential as an off the ball threat as well. While we rarely see Ohio State run much pick and roll action due to their lack of personnel (their guards aren't great shot-creators), Sullinger could be very effective in this area, as he not only has great hands, but is also a fairly quick leaper if able to catch the ball in the stride. From stand-still situations Sullinger is very much a below the rim guy, but we've seen him be extremely effective running the floor in transition and finishing drive and dish plays this year, giving us reason to believe that he could be an excellent weapon in the NBA half-court alongside a dynamic point guard.

Strictly an inside player early on in his high school career, Sullinger showed more and more potential as a perimeter shooter every time we saw him over the past three years. That's yet to manifest itself at the college level thus far, as he's only attempted six jump-shots this season. With his excellent mechanics, soft touch and strong work ethic, it's reasonable to assume that he will at least develop into a capable mid-range, if not a 3-point shooter, down the road. He's already an above average free throw shooter (67%) for a freshman big man.

Not an exceptional athlete, and slightly undersized standing somewhere between 6-8 and 6-9, Sullinger will need to continue to work on his body and expand his offensive arsenal if he's to translate his scoring production from college to the NBA. While he makes the most of his physical tools, Sullinger is not very quick or explosive compared to some of the more athletic power forwards he'll match up with on a nightly basis, making it important for him to keep himself in peak physical condition and maximize the tools he does possess. If he can polish up his face-up game and improve his ability to attack defenders off the dribble, he'll be that much more effective in the low post.

On the defensive end is where NBA teams are bound to have the most questions about Sullinger's potential. Undersized to play the center position he's ideally suited for, and lacking the lateral quickness to keep up with perimeter oriented power forwards, Sullinger will probably never be a first-team all-defender type. He's smart enough to not be a liability down the road, but has definitely struggled at times this season, being taken advantage of off the dribble in one-on-one situations, sometimes against very average opponents.

Sullinger offers very little presence as a shot-blocker around the basket, isn't using his length to contest opponents' shots, and isn't doing a good enough job of being physical and using his body to his advantage defensively early on in his college career. His focus and intensity-level seems to waver, and he's not nearly as fundamentally sound here as he is on the offensive end of the floor. This is where freshmen tend to struggle the most with the transition from high school to the NCAA, and Sullinger is no exception thus far.

While not possessing the same long-term upside of some of the other big men prospects in this draft, such as Perry Jones or John Henson, Sullinger is clearly not a finished product at age 18. He looks much more ready to step in and play from day one, though, which has to be deemed attractive for the worst teams in the NBA that will be picking first in the draft. Despite his limitations, players in Sullinger's mold, such as Kevin Love, Paul Millsap and Luis Scola have proven to be extremely effective in today's NBA. Add in his outstanding intangibleshe has a winner's mentality, is highly intelligent and appears to be an excellent teammateand you're talking about one of the safer bets in the draft.
Read Next...