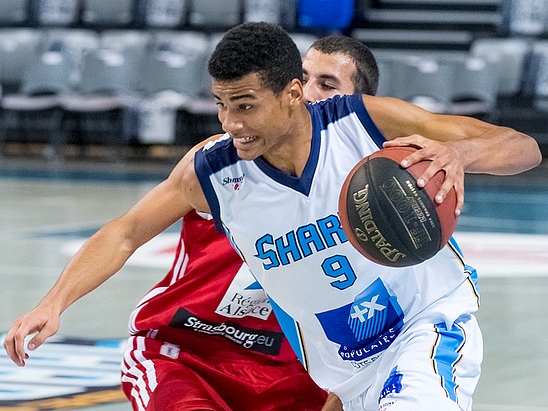 A year ago, virtually no one in his home country of France, even in the basketball community, knew much of anything about then-18 year old Timothe Luwawu. He had never played for any of France's various youth national teams, and he saw only 23 mop-up minutes in Pro A with his hometown team, Antibes, which was on the verge of being relegated back to the second division after only having been promoted that season.

Instead, Luwawu was biding his time in France's junior (Espoirs) league, which plays its games a few hours before the pros suit up on match-day every weekend. Luwawu's strong performance in the Espoirs league (18 points [52% 2P%, 34% 3P%], 6.5 rebounds, 2.8 assists, 1.5 steals in under 30 minutes per game) eventually earned him an invite to the France's U20 national team which competed in the European Championship last summer, where he played a minor role on a team that finished in 8th place.

Part of the team's preparation for the U20s was a series of games at the adidas EuroCamp in June, and Luwawu perked his head up just enough in the last two games (scoring 25 points in 46 minutes, including 5/7 for 3) to get noticed and likely earn some attention from the many NBA scouts in attendance.

This season started much like the year before, coming off the bench, this time in Pro B, but Luwawu played well enough in the first two months to earn the trust of young head coach Julien Espinosa and land himself a spot in his team's starting five, and he's mostly held onto that over the last ten games. Antibes has won 6 of their last 7 games, and finds itself just two games out of second place now, as they attempt to put themselves in position to get promoted back to Pro A next year.

Luwawu (who sometimes go by the name Timothe Luwawu-Cabarrot, or even just Timothe Cabarrot, using his mother's maiden name) stands out as a NBA prospect not so much for what he is now, but more for what he can become in the future.

Standing 6-7, he has long arms, big hands, a good frame, and excellent athletic ability. He's a versatile player who shows a nice framework of skills in virtually all facets of the games, be it with his ability to create off the dribble, find the open man, make shots from the perimeter, or defend a few different positions.

Luwawu's strong first step and ability to attack his man off the dribble with either hand, allows him to operate smoothly in transition or make plays in the half-court in a straight line. He shows flashes of being able to play at different speeds, but still isn't a strong enough ball-handler to fully take advantage of his athleticism and emerge as a more proficient shot-creator. He also could still stand to get stronger and improve his ability to finish around the basket in traffic, as he tends to shy away from contact at times, which is likely in part due to his youth and lack of experience.

Nevertheless, Luwawu has good court vision and is more than willing to make the extra pass and find the open man. He rarely overdribbles and shows a solid understanding of knowing how to make proper reads and contribute to his team's ball-movement.

Luwawu is a capable outside shooter, making just under one 3-pointer per game on average despite only playing 17 minutes on average. He has a compact, repeatable stroke with solid shooting mechanics, which suggests he has plenty of room to grow as a perimeter threat as his career moves on. He's making 78% of his free throw attempts on the season, which is a good sign. He can still stand to improve his balance and not dip the ball upon the catch as he tends to do at times, and isn't anywhere near as effective shooting off the dribble as he is with his feet set at the moment.

Luwawu's best skill at the moment, and possibly his most attractive NBA attribute long term, is the versatility he offers on defense. His combination of size, length and lateral quickness gives him the ability to guard up to four different positions at the Pro B level, and it's not difficult to see him developing into a big SG/SF type who can capably guard either wing position in the NBA and can occasionally be slotted onto guards as well. Luwawu has quick feet, great closeout speed, and very nice instincts jumping in the passing lanes, as he's shown averaging between 1.8-2 steals per-40 minutes in each of the last two seasons.

Luwawu has already indicated he will be putting his name in the 2015 NBA Draft, and his very small contract and buyout will likely make him an attractive option to teams looking to bring him to the NBA right away, or stash his rights in Europe for a couple of years.

In a draft that is looking stronger than many initially thought, there is a great deal of debate at the moment about which internationals should be considered the best prospects after the likes of Kristaps Porzingis and Mario Hezonja. Over the last 10 NBA Drafts, 47 international players (excluding those who attended US colleges) were drafted in the first round, or 4.7 per year on average, meaning there will likely be a few international players who will emerge as first round candidates for the 2015 Draft. The question is who. Luwawu is the first to throw his hat in the ring. There will surely be others.

Luwawu's framework of skills makes it easy to envision plugging him into a Danny Green, C.J. Miles or Thabo Sefolosha-esqe "3 and D" role in the NBA. A strong second half of the season will surely go a long way in fortifying his candidacy in this year's draft, as will an invite to the Nike Hoop Summit, which he is reportedly lobbying for behind the scenes. The fact that his team has secured a spot in the Finals of the French Leaders Cup Pro B (to be played prior before the Pro A French Cup in Disneyland Paris) should help his exposure as well.
Read Next...