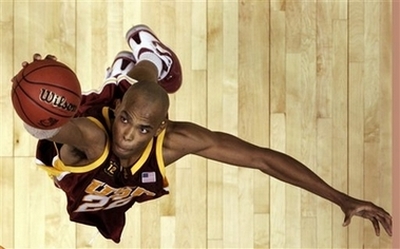 Had Taj Gibson not been called for his 4th foul of the game with 12:25 left to go in the 2nd half, its very much conceivable that USC would have left the building with a win. North Carolina was down by 11 points at the time, and with Gibson on the bench, went on a 20-2 run, with numerous baskets in that span coming off offensive rebounds or inside the paint, where Gibson dominated the entire game until picking up his fourth foul.

North Carolina ended up squeezing it out, but no one should soon forget the clinic that Gibson put on them in the first 28 minutes of the game. He attacked UNCs future lottery picks with supreme aggression, putting the ball on the floor numerous times and blowing by Tyler Hansbrough thanks to his superb quickness. He also established great position on him in the post and showed some nice moves finishing, as well as absolutely cleaning up on the offensive glass.

Defensively, Gibson was just as active, denying Hansbrough the type of position hes been accustomed to getting his entire career, and instead forcing him to settle for mid-range jumpers rather than using his typical tenacity around the rim. Gibson also did a magnificent job as a rebounder, using his quickness and aggressiveness to neutralize UNCs height and talent advantage in the frontcourt, and showing excellent toughness and hands coming down with some very strong boards.

With 12:25 to go, Gibson had 16 points and 11 rebounds and looked to be on the verge of a breakout performance on the national level to go along with an incredible upset over arguably the most talented team in America. A quick foul on Tyler Hansbrough in the post sent him to the bench with 4 fouls, though, and Gibson only had 1 rebound to show for his effort over the next 12 minutes, along with the loss. He looked completely exhausted in the minutes he was on the floor down the stretch, and its hard to blame him considering how hard he played matching up with two phenomenal talents in Wright and Hansbrough. Gibsons fifth foul, a moving screen violation, caused his head coach Tim Floyd to lose his mind and throw his cards on the court for no particular reason, which essentially lost his team the game.

Only a freshman, well surely be hearing plenty more of him next season in the Pac-10, playing next to O.J. Mayo. There is surely a place in the NBA for a big man with his mindset, but hell probably have to round out his offensive game a bit more first, which he surely has the talent to do.

Although his numbers wont blow anyone away, Al Horford has steadily emerging as the favorite for Regional MVP with the way hes been playing in the tournament so far. He had yet another excellent outing against Butler, doing everything his team needed to come away with the win.

Billy Donovans plan was to pound the ball inside the paint all game long and force Butlers undersized defenders to deal with his pair of lottery big men. His #1 option in that plan was Al Horford, and he delivered for him all evening long, scoring 16 points on only 5 attempts from the field. He got Butlers entire front-court in foul trouble almost by himself by establishing position deep in the paint and using his terrific strength to dig in the trenches, and then confidently marched to the free throw line to knock down 8 of his 10 attempts.

This has been the story of the tournament so far for Al Horfordhis newfound confidence in his offensive game. Hes always been considered a highly mechanical guy in the post, and while his fluidity wont exactly get Kevin Garnett jealous, its been very effective as an added bonus for a player who is already a superb defender and rebounder. That part of his game was there as well at it almost always is, particularly his shot-blocking ability, which forced Butler to rely largely on 3-point attempts to stay close.

All in all this was an ugly game that Florida had to work extremely hard for in order to win, and their best player as of late played a huge part in getting the job done.

With Tyler Hansbrough in foul trouble and clearly not himself tonight, North Carolina was forced to look to their extremely talented freshman Brandan Wright to help take out a very tough USC team.

Wright started off this game quite slow, like most of the Tar Heels, only hitting his first field goal with about 10 minutes to go in the first half. Wright has lacked some focus in the NCAA tournament so far, and it was slightly worrying to see him running up and down the court looking pretty dazed in the first quarter of the game.

Eventually, he started picking it up first and foremost on the offensive glass, and that got his entire game going as North Carolina made an outstanding run to close out the game in the second half. Wright pulled down 5 offensive rebounds on the night, and managed to score off every single one of them. Once with a terrific put-back jam, another time with a tip in off the glass, and in others just collecting the board over USCs undersized frontcourt and slamming it home with the greatest of ease.

In terms of evaluating his face-up game, tonight was a step back for North Carolinas talented freshman. He struggled putting the ball on the floor effectively and hitting any of his attempts from outside of the paint, missing a mid-range jumper from around the free throw line and on another occasion not even hitting the rim on another attempt. He contributed in other ways, though, running the floor extremely well as always and getting the job done with his beautiful jump-hook. Late in the game he showed a glimpse of why so many people have him pegged as a sure-fire top 5 pick in this years draft, scoring on an extremely tough one-handed attempt by just elevating off the floor and throwing the ball in the basket at the apex of his jump from a tough angle with incredible touch and feel. With so many other of the top prospects having strong performances in one game or another so far in this tournament, it was nice to see Brandan Wright get into the mix as well, although he could have done a lot more despite scoring 21 points. Still, you cant ignore the upside he shows, and thats why hes so highly regarded himself.

Taurean Green played his best game of the tournament this evening, doing exactly his team needed him to do to help them advance to the next round.

Green got off to another shaky start, his third straight in the NCAAs so far, but unlike in the other games, it didnt take him that long to settle in and get back on track. Green and Florida understood what they needed to do in order to win this game, and he kept going back to it time after time until the final horn sounded. With Butler not having anywhere near the size needed to compete with Floridas frontline, they quickly realized that pounding it inside was going to give them the best chance to win.

Green got his team into their sets very well, and got the ball to Al Horford primarily to let him go to work. Horfords method of backing his man down slowly and methodically to draw fouls or get as close as he possibly could to the basket was never going to reap many assists for his point guard, so some context is needed on why Greens assist numbers came out so low. Driving and dishing was not something that Butler was going to allow to happen tonight, so Green didnt try to force the issue like his teammate Corey Brewer did, and therefore didnt turn the ball over even once.

He just followed Billy Donovans game-plan to perfection, and knocked down his 3-pointers when the shot-clock was running down or the ball was swung to him in the rhythm of the offense. Hes shooting 39% on the season, so its no secret that the guy can shoot, in a variety of ways too. The biggest one he hit came off the dribble while the first half came to an end, putting Florida up by 6 and giving them great momentum going into the lockerroom. The Gators will need more steady performances like this from their point guard if they are to advance to the Final Four on Sunday.

Lost in the shuffle a bit between the terrific play of Nick Young and Taj Gibson has been the emergence of Gabe Pruitt as a legitimate point guard for USC. Pruitt did an excellent job helping his team building up a big lead on North Carolina in the first 28 minutes of the game, but like all of his teammates, could not pick up the slack once the Tar Heel locomotive got rolling with 12 minutes to go.

Pruitt is far from a finished product at this point, still needing to improve his ability to control tempo and become more aggressive at slashing to the rim and getting to the free throw line. His shot selection could also stand to improve, and hes not quite as consistent as youd hope on a game to game basis. Pruitt is expected to test the waters this year and will get his share of looks in the late first round due to his upside, but in our estimation, hed be well served to use his senior year to continue to develop his all-around game.
Read Next...