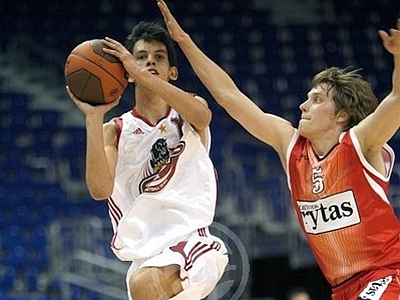 Luis Fernández
@DraftExpress
In a superb weekend, we could witness one of the best Euroleague Final Fours ever in a top-notch city like Berlin, but it was a Serbian kid stealing our hearts at the Nike International Junior Tournament. The 16-year old cadet Nenad Miljenovic came with a strong reputation, but his performance and the impression he left exceeded any expectation.

Lets say from the start that were dealing with an incredibly talented and creative playmaker, one of those extremely rare kids with an unbelievable feel for the game and outstanding skill set. Basketball is easy, natural and enjoyable for him. It was scary to think how comfortable, how effortlessly he delivered his stuff against much more physical kids who mostly were two years older than him (in a stage where two years means a whole lot: think about a high school sophomore facing seniors).

Miljenovic enjoys a fantastic offensive package, starting with terrific handles and footwork to break down defenses and get by opponents with great ease. He shows versatility taking the steps in penetration, emerging very creative in order to unbalance his rivals, attract defensive rotations or create separation from his opponents. Hes automatic finding his teammates anywhere on the court, exhibiting outstanding court vision and ability to identify passing angles. Whether feeding cutters, kicking-out to shooters, dishing after penetration, if theres a pass, chances are he will find it and execute it with the proper tempo. Its very instinctive stuff: he doesnt speculate, he barely needs to think. He acts. The ball is hardly ever frozen in his hands, and you could never label him as a ball hog (according to what we saw in Berlin); he just looks for something to happen for his team.

However, as good passer and selfless as he is, Miljenovic doesnt pass up on a scoring opportunity and shows remarkable ability to get the ball going through the net. His shot looked pretty good all tournament long, showing nice mechanics in the release, although he stuck for spot-up jumpers from mid-to-long ranges. Despite lacking strength and top explosiveness for the moment, while not being an off-the-charts athlete, Nenad was able to finish near the rim with a variety of layups and short shots, showing excellent ability reading defenses and finding windows for releasing the ball.

All in all, his decision making is extremely hard to question. He certainly takes more risks than other point guards, but its nothing out of proportion. He looks in really good shape if we talk about basketball IQ and understanding of the game.

Defense emerges as his biggest weakness. He showed a nose for picking pockets and getting into passing lines, but were not going to sweeten the reality: at this point he wouldnt be able to guard his own shadow. He needs to properly learn the nuances of defense and put a few extra degrees of effort in order to stay in front of his match-ups, while his physical development will greatly help him. Keep in mind hes a very skinny kid. Its not only a matter of being 16 years old, but he really looked like a boy among young men. His frame is promising, though. At 6-4 hes pretty big for a point-guard and theres nothing wrong with his wingspan or athleticism. Actually, he grabbed a surprisingly good amount of rebounds. That speaks of his nice length, but also about activity and positioning. Again, instincts doing their work.

If his skill set and eventual flashy plays dazzled the audience, his real influence on the games, although perhaps going under the radar for some, was nothing short of impressive.

With his much more experienced teammate Nikola Vukasovic almost monopolizing the leading playmaking duties, Miljenovic looked doomed for a marginal role, indeed not stepping on the court until very late into the third quarter against a surprisingly combative Alba Berlin. However, his impact on the court was automatic. He didnt deliver any outstanding individual performance in that opener, but he changed the face of the team and the rhythm of the game.

With more playing time, a bigger role on the court and increasingly impressive play, that was the tune during the whole tournament. Vukasovic, as talented as he is, lacks offensive aggressiveness, which usually results in a slower game tempo and a mechanical and predictable style for the team. With Miljenovic on the floor it seems like the whole FMP arsenal is unleashed, even when he shared minutes with Vukasovic, he emerged pretty effective playing off the ball as well. As soon as he hits the court, the ball starts flowing, the pace gets faster, the players become more active and the team runs the floor. I had never seen Dejan Musli running as much as he did these days in Berlin. And its hard to imagine any different scenario than FMPs starring center completely worshiping his point guard fellow, given how ridiculously easily he got production out of Nenads hands.

Its not a matter of taking anything out of Muslis great performance in Berlin, he was really dominant, completely owned Jonas Valanciunas in the final and showed nice improvements in his game. But unlike the NIJT jury, I could have only named Miljenovic as the tournament MVP (he was granted a place in the all-tournament team, though). His influence exceeded any other players, and on first glance, his plus/minus stats likely topped the tourneys by a landslide. Lets put it this way: with Musli on the floor and Nenad on the bench, FMP was trailing against Alba Berlin; put Miljenovic on the floor and take Dejan out, and the show was still going on.

Going beyond his effectiveness, Miljenovic is a breath of fresh air on the basketball scene. His creativity, even his flashy moves, go along an apparently extremely likeable character. The kid just has fun out there, and regularly offers a smile on his face. I cant remember anything similar during the past years in the Serbian basketball, even the Balkan area as a whole.

On top of it, he looks like a superb teammate, and acted as you would have never expected from a cadet playing with juniors. He was often the first one receiving his teammates on the bench, he was regularly high-fiving and cheering for everybody, and he went as far as chest-bumping his own coach after he linked a few spectacular plays. Weve seen FMP for a few years now with this very same coach, usually while they dominated, and never ever witness anything similar. Considering it comes from a cadet, its almost inconceivable.

Truth to be told, the kid seems to have a special relationship with everybody on FMP. He was the only player we saw during a game talking with the team president Nebojsa Covic, who was always placed behind the bench and constantly communicating with the coaches (actually, FMP had a bit of a schizophrenic direction, with two guys acting like head coaches and constantly exchanging looks and words with their president).

In a hilarious sequence, Miljenovic delivered a behind-the-back pass on a fastbreak, and looked towards the bench, as if to excuse himself for his flashiness of course, with a smile on his face-. The head coach turned looking for his president and couldnt avoid smiling himself. Its the kind of stuff you rarely see in the Serbian basketball school. Actually, it makes you think how much the FMP staff might be holding back on Miljenovics creativity on the court.

Our long-time friend and eventual collaborator Juan Antonio Hinojo brilliantly pointed out how much Nenad reminded him of Sergio Rodriguez. Not only in terms of skills, but also with his body language or easy-going character. It would be interesting to check how much further that resemblance would go if Miljenovic enjoyed the same freedom Sergio had back in his junior days in Spain. Regardless, we can already say that Sergio is the most dominant junior weve seen playing on the perimeter, and Nenad is the most impressive cadet weve ever witnessed sharing the floor with juniors--with the only possible competition coming from Ricky Rubio himself back in the 2006 LHospitalet Tournament.

The future looks bright for him, although uncertainty is a big part of the equation when talking about kids who are so young. Still, nobody will take away the impression he left in Berlin. Every time Miljenovic smiles on a basketball court, basketball itself smiles with this kid running the show.
Read Next...