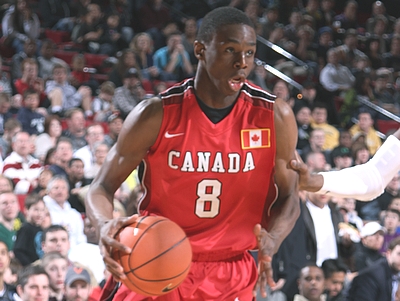 The youngest player at the Nike Hoop Summit, having just turned 17 two months ago, Andrew Wiggins had an incredible week in Portland, showing he's one of the most talented prospects in the world currently outside the NBA.

Measuring 6-7, with a 6-11 wingspan and a terrific frame for a prospect his age, Wiggins clearly has ideal physical tools for a NBA wing. He's a fluid and explosive athlete on top of that, capable of getting to wherever he wants on the floor with his excellent first step and strong leaping ability.

While not yet a dynamic ball-handler in the half-court, Wiggins is a very effective shot-creator thanks to his terrific quickness and scoring instincts. He uses crafty jukes and hesitation moves to get his man off balance and then blow by him, where he can finish above the rim in highlight reel fashion. He's primarily a right-handed driver at this stage, still needing to improve his overall ball-handling skills and ability to play at different speeds, which is normal considering his age. With his size, strength and budding talent, he looks to have outstanding potential in this area, particularly operating in transition.

Wiggins is also a capable shooter, despite possessing somewhat unorthodox mechanics on his jumper, with a low release point. Although streaky at times, he showed the ability to make shots from all over the floor with a compact, consistent motion, and should be able to raise his release as time goes by without too much of a problem.

Defensively, Wiggins has all the tools to be a game-changing presence, with his terrific size, length, frame and quickness. He makes plays on a regular basis here, be it getting in the passing lanes, blocking shots or smothering opponents on the perimeter with his long arms and huge hands. Like many young players, he's a bit naïve at times on this end of the floor, as it's clear he still lacks significant experience here. With added maturity and good coaching, Wiggins has the potential to be a lock-down defender guarding either wing position.

The son of a former NBA first round draft pick, Mitchell Wiggins, and a former track and field Olympian silver-medalist, Marita Payne-Wiggins, Andrew obviously has genetics working in his favor. He has consistently continued to improve every time we've seen him since he was [url=just 15 years old, which combined with his humble off-court disposition, is a great sign for his future. As long as he keeps his head on straightsomething that many not be easy with all the attention that will be coming his way--and continues to improve on his weaknesses, the sky is the limit for Wiggins as a basketball prospect. As a high school sophomore, he currently isn't eligible to be drafted until 2015, but should be able to speed up that process by reclassifying to the class of 2013. 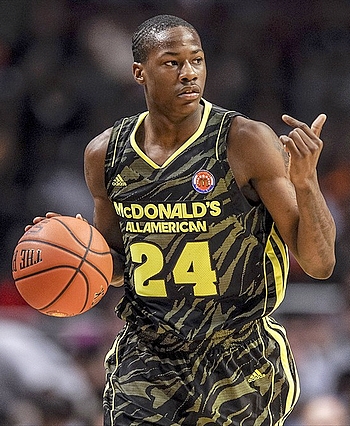 Extremely young for his class, not turning 18 until August, Goodwin appears to be one of the most talented scorers in this class. He will be a player to watch over the course of his freshman season to see how he develops. If he can iron out the weaker parts of his game, he could draw some early interest from pro scouts. 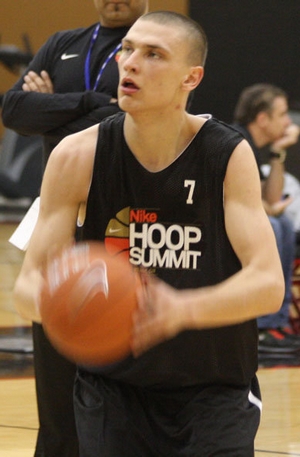 The third Polish prospect to participate in the Hoop Summit in the last two years, Michal Michalak only scored 5 points in the Hoop Summit, but was clearly the World Select Team's best shooter throughout the week in practice. Averaging 17.4 points per-game in the Polish League since joining LKS Lodz midseason, it wasn't hard to see what Michalak brings to the table in the European game.

Standing 6-6 with a 6-6 wingspan and a skinny frame, Michalak is not an imposing physical specimen. He does use hesitation moves with some effectiveness when putting the ball on the floor, but lacks the speed and explosiveness to do much damage off the dribble and around the rim.

Where Michalak was able to make an impact was beyond the arc. His smooth mechanics and consistent release point make him a terrific spot-up threat who can knock down shots with his feet set or when running off of screens. When forced to attack of the dribble and given space, Michalak has a nice pull-up jump shot, a decent floater, and isn't afraid to draw contact. However, he lacks the quickness to consistently create his own shot in one-on-one situations. The young guard fared pretty well when looking to pass the ball when he did drive, creatively finding his teammates, but getting swallowed up by the defense and turning the ball over on a few occasions as well.

Defensively, Michalak plays with good intensity, but is limited by his lack of lateral quickness. Knowing this, he often gives his man a cushion, allowing him to deny dribble penetration at this level. It will be worth keeping an eye on how Michalak is able to manage on the defensive end as he progresses considering his limited physical tools.

A prolific spot-up threat for a player his age, Michalak is a key component to Poland's promising 1993 generation. His athleticism limits his upside as a NBA prospect, but he has a clear asset in his jump shot and is not incapable of making plays off the dribble, making him a prolific offensive option in Poland and a prospect worth keeping tabs on should he improve his frame and continue developing. 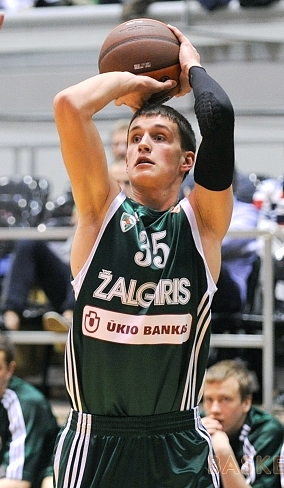 A late addition to the roster due to the withdrawal of Evan Fournier, Lithuanian Tauras Jogela didn't have a great impact over the course of his week in Portland.

Showing good size for a small forward at 6-7, albeit with an unimpressive 6-5 wingspan, Jogela is a very good athlete who can make plays on both ends of the floor using his solid quickness and leaping ability.

Capable of beating opponents off the dribble with a strong first step, Jogela is more effective in transition than he is in the half-court. His ball-handling skills are average and he tends to force the issue with his dribble, but he's capable of drawing plenty of fouls with the way he attacks the rim.

A below average shooter, Jogela struggled to make jumpers all week long, particularly off the dribble. He did not seem to show a great feel for knowing what his limitations are, playing primarily off his instincts and sometimes being very turnover prone.

Defensively, he showed the ability to get in the passing lanes and stay in front of opposing forwards, even if it's clear he's still adjusting to playing on the perimeter full time.

Once considered one of the most promising prospects in his age group after being named MVP of the U-16 European Championships, playing primarily at the power forward position and taking advantage of his excellent athleticism, his star has faded somewhat over the past few years as other players his age have caught up to him physically. Still, he's having a bounce-back season in Lithuania and surely has the talent to make a good career for himself in Europe if he can continue to hone his perimeter shooting ability and basketball IQ.
Read Next...