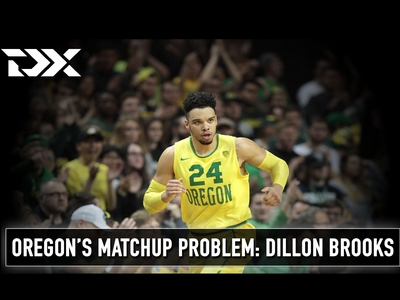 Julian Applebome
@jlapplebome
Julian Applebome analyzes Oregon Junior Dillon Brooks, and the impact he has had as a combo forward for one of the top teams in the NCAA.

The Mississauga native has become one of the most difficult covers in college basketball. At 6'7 and 215 pounds, Brooks has the size and strength to play both forward positions at the college level, and has caused problems for opposing defenses all season. He is shooting a career best 42.7% from deep on nearly 4 attempts per game. His improved shooting (up from 33.8% last year) has opened up other offensive options for him, and he has shown promise as a powerful straight line driver and high post option. His per-40 assist average of 4.9 is a career high as well, and he has shown an improved feel as a playmaking option.

While Brooks has been a dynamic offensive option throughout the season and has hit big time shots in clutch situations, there are still questions surrounding his transition to the NBA game. At 6'7, he has just decent size for a combo forward type, and lacks the plus length or outstanding athletic ability to make up for it. He is a powerful athlete when he has space and momentum to load up, but can be somewhat heavy footed in a crowd or laterally.

Given his strength and skill set he is a major mismatch at the college level, but will have to improve his overall consistency on the defensive end, as well as his decision making, shot-selection and at times questionable demeanor around teammates.

Despite some of his potential shortcomings, Brooks has proven to be one of the fieriest competitors in college basketball, and has been an ultra-important piece all season long for a team with national championship aspirations.