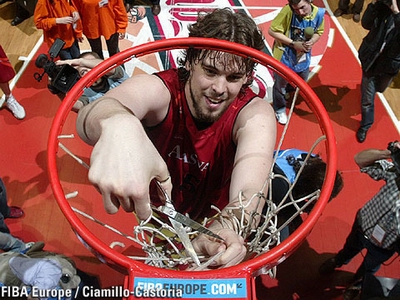 Luis Fernández
@DraftExpress
He might not be the most spectacular guy on a basketball court and he will rarely display eye-popping moves, but you will hardly find a more consistent youngster than Marc Gasol in all of Europe. Consistency was what he again delivered in the FIBA EuroCup Final Four, helping his team Akasvayu Girona win the title. In a rather quiet week for young prospects, Gasol gets the edge for our Player of the Week nomination, over another remarkable showing by Tiago Splitter.

Player of the Week: Marc Gasol

As usual, he didnt make much noise, nor did he capture the headlines in his teams victory in the FIBA EuroCup. But he was again an important foundation in Akasvayus game. Gasol has emerged as a guy you can count on in every game, whether your routine regular season visit or a crucial appointment such as the EuroCup Final Four. He did well in the semifinal, with 9 points and 6 rebounds as his team routed MMT Estudiantes. Something more was needed in the final against Azovmash, and something more he delivered: 12 points, 5 rebounds and 2 assists, scoring some clutch points in the final minutes of the game to build a decisive lead in the score.

Skill wise, Marc stuck to his usual repertoire. If anything, he surprised in the final putting the ball on the floor with his right hand to attack his rival, and eventually got a trip to the free-throw line. Obviously his limited quickness is what prevents Gasol from using this kind of option more often, as he enjoys nice ball-handling skills for a seven footer. On the negative side, this Final Four again exposed that he could certainly use a better left hand. He loses space and effectiveness going for an orthodox right-handed short shot instead of a left-handed jump-hook whenever he attacks a rival from the left. At least hes nicely developing the right-handed jumphook. He will certainly need it to overcome big athletic defenders at the next level while playing in the low post.

Although we have dealt it before, it deserves to be stressed again the way he contributes to his teams offensive fluidity, showing a high basketball IQ and excellent court vision--always being aware of his teammates position. That fluidity comes both in the set offense, particularly they way Gasol ships the ball quickly to the weak side, and in transition, as hes automatic sending the ball to a guard after a defensive rebound to ignite the offense.

How much will Gasols lack of athleticism get exposed in the NBA? I guess thats the question every single decision maker will be asking himself when it comes to evaluating the big Spanish center. With much more individual oriented defenses, its a very legit concern. In the ACB League, he relies on his excellent positioning to emerge as a very solid defensive presence. Its not going to be the same in the NBA. Still, his size, smarts and nice skill set might draw him a first round spot come draft night.

Tiago Splitter stepped up again for Tau Vitoria with 17 points, 11 rebounds and 3 blocks to lead his team to the victory over Etosa Alicante. He looked very comfortable on the court, delivering great moves in the paint and even putting the ball on the floor to attack his match-up. Still, he again exposed his limitations playing above the rim. In the last five games in the ACB League, Splitter averages 17.6 points and 7.4 rebounds, resulting in five victories for Tau. The intrigue around Tiago grows as the Euroleague Final Four gets closer.

Goran Dragic delivered instant offense off the bench for his team Polaris World Murcia this last weekend with a 17-point performance in just 18 minutes of playing time while missing only one shot from the field. It wasnt enough against DKV Joventut, though, and the team from Murcia keeps getting dangerously close to the positions from which teams get demoted to the second league from, at the bottom of the ACB League.

Milos Teodosic continues his successful translation to starting point guard in FMP. He was the anchor of his team in the first game of the Adriatic League Finals, with 18 points, 2 rebounds and 7 assists. Unfortunately for him, FMP fell two points short of the victory, losing the home-court advantage in the meantime.

Milenko Tepic hasnt precisely impressed this season with his statistical effort. But his game is more about intangibles than numbers, about taking good decisions, being in the right place and emerging as a solid presence for his team on both ends of the court. Thats why he had been trusted with major playing time. However, that pattern has changed lately, with Tepic consistently spending more time on the bench than on the court in the Adriatic League. His decreasing presence on court that has left him only 13 minutes of playing time in the last two games (he had only played less than 14 minutes once in the Adriatic League this season). His shooting struggles, that are slowing his scoring down, are likely the reason why coach Vujosevic prefers other options in these decisive games.
Read Next...