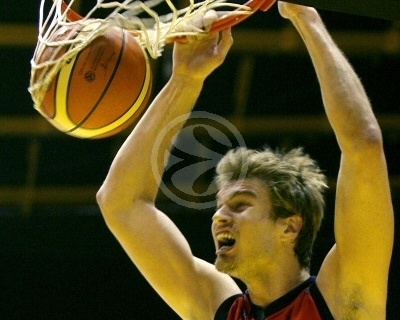 Its official: Tiago Splitter is back. After playing in pain for months, he once again looks like the same old intense, aggressive and active player we always knew. Its a completely different feeling from what he transmitted just a few weeks ago. His quickness, athletic reactivity, the way he chases after rebounds, his renewed confidence looking for the basket his body language speaks for itself.

It didnt make sense. It wasnt logical that a guy who had always been distinguished by his intensity and activity on court, a hard-working player such as Splitter, suddenly looked so passive and soft. As we have told you here a few times, it was almost certainly a matter of the back problems that apparently seem resolved now.

Tiago couldnt have chosen a better moment to show up again. Right in the middle of the Top-16 fight in the Euroleague, and with Zoran Planinic back on court after his finger injury, Splitters improved contribution should be able to help take Tau Vitoria all the way back to the Final Four. Indeed this week was a triumphant march for Tau over its rivals. Lottomatica Roma was no opponent in the Euroleague, never being able to find any answer to the offensive and defensive power displayed by the Spanish team. Tiago had 18 points (a season high for him in the competition) and 5 rebounds. Style-wise, it was his typical performance, playing basically without the ball to look for spaces in the paint and punish defensive rotations. But he was much more active searching for these options, while looking more confident and quick when it came to attacking the basket for the layup, or eventually for the two-handed dunk. The same could be said about his defense, significantly improved from previous weeks. He could even successfully contain perimeter rivals in defensive switches.

1900
The Brazilian looked even better in the ACB League. For some stretches, he was everywhere, being a part of almost every play, whether offensive or defensive, that occurred on the court. He was the cornerstone for Tau building an early lead in the first quarter that pretty much left Unicaja Málaga knocked out. Splitter settled for 15 points and 8 rebounds, staying particularly aggressive in the rebounding department. He grabbed some excellent boards with opposition on both ends of the court, not backing down from contact and exploiting his quickness.

Offensively, Tiago was very active in the low post, trying to score in one-on-one situations, although with mixed results. He was called for travelling twice and committed an offensive foul, although they were all nice post moves. On the other hand, he forced fouls himself, delivered some solid passes out of the low post whenever he was double teamed, and also displayed a very nice finish extending his right arm under Daniel Santiagos left to release a layup.

Hopefully, Splitter will be able to stay healthy for the remainder of the season. If this happens, expect him to have a very good shot at cracking the lottery. While some people might be tired of hearing his name (it seems like forever since he first declared for the draft), we shouldnt forget that hes a seven footer that, when healthy, delivers day in and day out at the very top level of international basketball.

Vladimir Stimac, who is tearing it up for Lacplesa Alus in the Baltic League. This week, the Serbian big delivered a couple of superb performances leading his team to the victory. Against Atletas, he had 24 points, 18 rebounds and 4 steals; facing Panevezys, he produced 31 points, 17 rebounds and 3 steals. Stimac belongs to the Lithuanian powerhouse Zalgiris, but was loaned some weeks ago to Lacplesa Alus. Having already played five games there, he has enjoyed an immediate impact for his squad. Vladimir averages 22 points, shooting a ridiculous 76% from the field, and 13 rebounds, while Lacplesa Alus has gone 4-1 in the Baltic League since his arrival. Its pretty impressive, regardless of the mediocre competition level.

Born in 1987, Vladimir is another member of that extremely talented Serbian generation, which weve spoken of ad-nauseum, so deep that he has only played with the National Team in the 2005 U-18 Championship, where he was a secondary guy. Chances are his role with be significantly bigger this summer at the U-20 stage.

1901
Hes a 6-10 inside player who makes a living in the paint. Quite strong for his age, Stimac uses his big body perfectly in the low post, displaying nice moves and solid footwork, while enjoying an excellent ability to put the ball in the net around the basket, as he uses both hands and looks quite reliable with the semi-hook. Vladimir is a smart guy who makes good decisions and plays pretty well off the ball, while he enjoys good hands and shows a high level of activity on court. Thats how Stimac makes up for his limited athleticism, trying to make the most out of it with intensity and aggressiveness, which helps him tremendously on defense and rebounding, areas where he shows good positioning and the attitude to get the job done.

However, if we talk about potential, his athletic shortcomings and the fact that hes an undersized center are not the most intriguing combination. In simple words, he doesnt look like an NBA prospect at this point at all. Still, his emergence in the Baltic League was too spectacular to ignore here.

Yi Jianlian completed the CBA quarterfinal series with another superb stat-line: 32 points, 17 rebounds and 3 blocks. Indeed Guangdong has swept Shangai (3-0) following Yis impressive production, with averages of 30 points (67% from the field), 14 rebounds and 2.7 blocks. Truly Yao Ming-esque numbers. Its interesting to note that, while Yi built his scoring effort with mid-range jumpers in the first game, he stuck to dunks and layups in this third act, finally taking full advantage of Shangais weak inside game. Actually, he only shot one jump-shot, and it went in. Instead, he looked for his points in the low post (where his unpolished footwork was exposed once again), cleaning the offensive glass (he grabbed 5 offensive boards), in transition plays or moving without the ball to find open looks under the hoop. On defense, he didnt put in much effort, lacking focus and intensity.

Nikita Shabalkin erupted for 34 points and 5 rebounds in the first game of the FIBA EuroCup Challenge against PizzaExpress from Cyprus. The Russian forward stayed almost perfect, missing one lone field goal and a free throw. His team Samara lost the game by two points, but remains well positioned for the second leg of the semifinals, to be played at home in Russia, in order to advance to the final. Although this is obviously a very weak competition, Shabalkin stands third in the scoring column with 22.2 points per game, which is not bad at all.

Anton Ponkrashov managed to dish out a whopping 14 assists (a career-high, as far as we know) in CSKAs blow-out victory over Sibirtelekom-Lokomotiv. He only needed 27 minutes on court to reach that impressive figure, truly amazing in international basketball. But there was more, as he scored 17 points with no field goals missed, while he rounded out his performance with 4 rebounds and 2 steals. Ponkrashov is just a terrific playmaker who suffers from CSKAs depth and demanding level to get more consistent playing time, particularly if we talk about the Euroleague.

Marco Belinelli delivered 29 points and 4 rebounds in Climamio Bolognas victory over TDShop.it Livorno. This is only the second victory on the road for Climamio this season in the Italian League, and more will have to come if this Italian powerhouse wants to advance to the playoffs. Curiously, this is the third time Marco reaches this point mark, but only in this occasion his team ended up winning the game. Anyway, he continues climbing up the Italian scoring leaders chart, now standing fifth with 18.3 points per game.

Danilo Gallinaris sweet momentum continues. This weekend he had 19 points, 6 rebounds and 3 assists in Armani Jeans Milanos victory over Premiata Montegranaro. The Italian wunderkind has scored in double digits in 6 out of the last 7 games, averaging 15.1 points over that span.

Manuchar Markoishvili had 25 points, 6 rebounds, 3 assists and 2 steals leading Olimpija Ljubljana over Crvena Zvezda. It was an excellent game against a quality rival in a very solid season for him. Perhaps Markoishvili doesnt impress as much with his potential anymore, but hes becoming a productive player in the European scene.

Stanko Barac emerged again with another big game, leading Siroki over Geoplin Slovan with 22 points, 7 rebounds, 4 assists, 2 steals and 2 blocks. His production grows as the season advances, just confirming his status as one of the most intriguing prospects in the Adriatic League this season.

Mantas Kalnietis barely received any playing time in the last two games Zalgiris has played in the Baltic League: a grand total of 6 minutes and no points against ASK Riga and Lietuvos Rytas. Coach Grigas doesnt seem to trust the young point guard enough to run Zalgiris offense. Actually, both were difficult games (a close victory against ASK and a painful loss against the archrival Rytas), and it was DeJuan Collins taking over the playmaking duties. It comes to reflect the fact that Kalnietis still is not a reliable point guard, and even if he enjoys all the tools to become an excellent player, he needs to improve in basic areas related to his decision making, such as distribution of the ball or setting the proper game rhythm. The potential is there, but it seems it will take him a bit more than expected to figure out how to effectively take advantage of his wonderful physical/athletic conditions.
Read Next...