Roundup: Tsintsadze at his Best 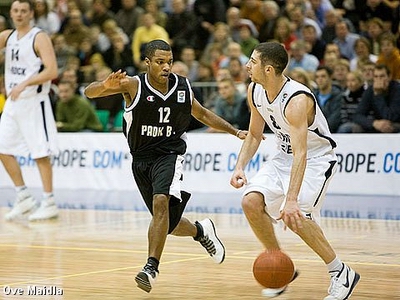 This was an amazing week for George Tsintsadze. The Georgian point guard delivered back-to-back excellent performances in the FIBA Eurocup and the BBL against solid competition. He kicked off in the continental competition against Greek team PAOK, leading his team to a victory with 21 points and 6 assists. On the weekend, Tartu paid a visit to Baltic powerhouse Zalgiris Kaunas, and stood up nicely, losing only by ten points. Again Tsintsadze emerged with 28 points, 3 rebounds and 4 assists to command his teams efforts. In a season full of ups and downs for him, it would be a good starting point for a very solid second half of the year.

What Tsintsadze brings to the table is an intriguing combination of very solid physical tools, excellent (albeit inconsistent) ability finding his teammates, and some scoring potential. Hes a 6-4 well-built point who is nicely filling out his body. His athleticism isnt looking as promising as it used to this season, but hes a fairly quick guy, although not greatly explosive. Most of his game rests in drive-and-dish situations. When he feels comfortable and confident on the floor, he can become really active attacking his opponents to unbalance opposing defenses, punishing team rotations to provide scoring opportunities for his teammates. He has nice ball-handling and can attack going either left or right, although he looks more incisive and effective with his right hand. He doesnt really explode past his defenders, but works well with his body and footwork.

2847
When it comes to putting the ball in the net, Tsintsadze gains effectiveness as he gets closer to the paint. He can finish around the basket creatively, with runners or floaters, showing nice touch in the process. Being 6-4 also helps to operate there. Actually, he can even post up his match-ups, usually smaller than him, although its not the most common thing to see. His jumper is a work in progress. He has three-point range, but no real consistency knocking them down. Besides, his mechanics arent very helpful, as he often puts the ball right in front of his face in order to release it, therefore allowing his opponents to easily contest his shots, which requires more space than usual to get his jumper off. Hes more effective from mid-range distances, also feeling more comfortable shooting off the dribble.

The Georgian is still an inconsistent player. He delivers stretches of solid playmaking, becoming a productive catalyst, providing points and plenty of good passes, but he also suffers periods where bad decisions, tentativeness and a certain lack of activity and creativity are the rule. NBA wise, he lacks the type of elite athleticism that guards usually require. Hes not a great defender, lacks a bit of lateral quickness and some activity level. Meanwhile, he doesnt make up for it with a consistent perimeter shot. Still, he might have a shot at getting into the second round, if he manages to keep up his late efforts.

It looks like the LEB Plata (Spanish third division), the league where Paulao Prestes regularly plays, was too weak for the Brazilian center. This past weekend he had 21 points, 14 rebounds and 4 blocks to lead Auxarquia (a team linked with his rights holders--Unicaja) over Ourense. He actually averages 17.1 points and 9.9 rebounds throughout the season. So pretty much dominating the minors, Prestes has lately been given the chance to enjoy some playing time in the Euroleague with Unicaja, taking advantage to deliver a few productive performances. This past week, he had 9 points and 5 rebounds in only 13 minutes of action. The guy is a stat stuffer, as he already showed in the past U-19 World Championships.

Where does his productivity come from? It mostly revolves around his strength, and his knowledge and willingness to use it. Prestes is a very strong player, with decent size (listed 6-10 barefoot, it looks more like his size with shoes) and a great wingspan. Hes also a physical guy, especially on the offensive end, strong on his knees, and able to easily hold position down low. Hes not very athletic, but hes quite coordinated, showing nice mobility and running the court decently.

The Brazilian is a center all the way on both ends of the court. When it comes to scoring, he feels more comfortable the closer he gets to the basket. If he steps out to the perimeter, it will be to receive and pass the ball or to set a pick. He always continues his screens by rolling towards the basket. He does a good job moving off the ball and looks active trying to establish position on the low block. Once having received the ball there, he likes to work with his left shoulder trying to release the ball with his right hand, ultimately becoming pretty predictable. Hes pretty effective scoring around the basket, but doesnt really enjoy a traditional hook shot. Its more like a very short one-handed shot that he takes almost completely facing the basket, and often using the glass. If hes not close enough to the basket, he will likely pass the ball back to the perimeter or go for a turnaround jumper with mixed results, particularly inconsistent if he tries any kind of fade-away move. Pretty solid from the charity stripe, Paulao shows fluid mechanics that likely translate in a decent-to-nice mid-range jumper, but hes not very prolific in this department just yet.

2848
Prestes has been able to regularly deliver his offensive stuff in the LEB Plata, where theres limited size, while squads like Le Mans or Armani Jeans Milano in the Euroleague (against whom he has been productive) dont precisely stand out for having big centers or great inside power. It remains to be seen how he fares against bigger opponents, if he will be able to release his shots over his rivals relying on his wingspan as he does now.

Defense is another area where he draws mixed feelings. On the positive side, his strength allows him to battle in the paint against any player, also showing nice positioning and attitude. However, hes not particularly quick moving laterally, and struggles when hes forced to step out on the perimeter, while hes not much of an intimidator. A skilled or big match-up will be able to score over him, as hes not that big for a center, and barely gets off his feet from standstill positions.

To summarize, we dont see great NBA potential in him. Besides working as much as possible on conditioning, he needs to gain versatility on the offensive end, working with his left hand in the low post, developing more effective shots against bigger players, establishing a solid mid-range jumper, and trying to make up for his defensive shortcomings with more physical defense. Anyway, he looks like a very solid player in the making for the European scene.

Danilo Gallinari delivered Player-of-the-Week caliber performances both in the Euroleague and Italian League. In the domestic competition, he had 29 points, 2 rebounds, 3 assists and 2 blocks, although his team clearly lost against Siviglia Wear Teramo. Hes averaging 20.5 points during the last 8 games in the Lega, and has become the first offensive option of his team. His ability to beat his opponent off the dribble thanks to his ball-handling skills, first step, footwork and use of his body, provides plenty of layups for him, consistent game creation for his teammates, and regular trips to the charity stripe. As limited as his quickness sometimes look, nobody really can completely shut him down. So hes simply the most reliable option for his team. In the Euroleague, he led Armani Jeans Milano to a victory over Aris scoring 20 points, with 5 rebounds and 3 assists. Indeed, with the game on the line, he connected on three clutch three pointers that proved once again his winning character. On the negative side, his defense is looking extremely underwhelming compared to what he had shown last season; our guess is that hes saving his efforts for the offensive end.

Chen Jianghua came back to life just in time to help his team Guangdong advance to the semifinals, with a 3-0 sweep over Guangsha. Chen particularly shined in the first two games, with 17 points, 8 rebounds, 5 assists and 4 steals in the first, and 21 points, 4 rebounds and 3 steals in the second. He came back from an injury barely a month ago, and it has taken him several weeks to get in to competition rhythm.

Novica Velickovic erupted this past week with a 22-point, 9-rebound performance in the Euroleague against Lottomatica Roma. Hes having a pretty strong season with Partizan, with averages of 11.1 points and 7.3 rebounds in the top European competition. Velickovic is a 6-9 forward, born in 1986, who usually officiates as a power forward, but who has spent some stretches playing on the perimeter. Anyway, hes mostly a face-up guy who can shoot with range (although still not consistently) and put the ball on the floor to attack the basket. Pretty strong, intelligent, a solid defender, a good rebounder, and active on the court, hes a reliable presence for his team. His NBA potential is very limited by the fact that hes not particularly big for a power forward and his decent athleticism isnt enough to make up for it; meanwhile, hes not skilled enough for a small forward, lacking, better handles, a better touch from deep positions and the quickness you would like for a perimeter guy. Hes draft eligible this year.

Life hasnt changed much for Alexis Ajinca over the last season. Hes struggling again to get playing time in his new team Hyeres-Toulon, only averaging 7.8 minutes per game. Indeed, he recently was rewarded with three starts, but he couldnt stay on the court for more than 10 minutes in any of those game. His very peculiar profile as a basketball player doesnt seem to fit easily with high-level competition so far, but his impressive conditions are there, and he can only keep working to develop them.

Nikola Pekovic has reached an agreement with Panathinaikos for, apparently, the following three seasons. He will only move to the Greek powerhouse after his current season with Partizan is finished.

Pekovic blossomed this season into one of the most productive inside men all over Europe, which combined with his youth, made him one of the most attractive players on the European market. Rumors say he was paid as much as 4.5 million Euros (6.55 million dollars net) for three years, which is similar to the type of money this years #1 overall pick will receive in gross terms. This move is a clear statement by the player towards a future in the European scene for the mid-term. He hasnt even waited for the NBA draft to evaluate his options at the American league. In the end, this is certainly a hit to his draft stock. Since any team drafting him in the end of the first round will likely never see him step foot on an NBA court (because of the extremely limiting rookie scale), its much more likely that he goes in the 2nd round now.
Read Next...