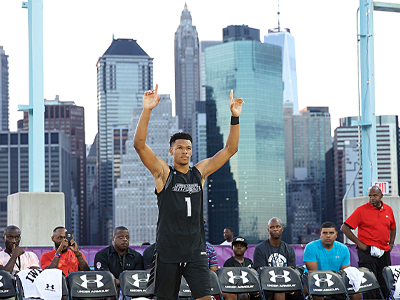 Jeremy Bauman
@DXContent
Perimeter shooting is a crucial skill to possess in the modern NBA.

The prospects at the Under Armour Elite 24 this past weekend in New York City recognized that the need to be an efficient shooter is paramount to diversifying their games and maximizing their potential. With the modern NBA in mind, it is a necessity to pay attention to the jump shooting evolution while continuing to round out their games. If they can become more consistent as shooters then other options will open up for these talented prospects, which are still learning and growing into their bodies.

The premium placed on stretching the floor at all positions in the NBA means that players who are outside threats will have an advantage.

Following two practices, a dunk contest and a 3-point contest was the Showcase game on Saturday evening, August 20th. The game, which went into overtime, featured 24 of the top rising high school juniors and seniors in the country.

Trevon Duval, the top point guard in the class of 2017, had a team-high 25 points and took over down the stretch, as Team Drive emerged with a win thanks to his powerful finishes at the rim in overtime.

Duval is known as a player who is capable of relentlessly attacking the rim off the bounce, and he lived up to that this week. At times he can be overly reliant on his dribble to get by the defense, which does get him into trouble on occasion, but more often than not as a result of his ball-handling, quickness and power he creates a finishing opportunity at the rim for himself or dishes to a teammate with his impressive court vision and passing acumen.

At the Elite 24 practices in front of NBA scouts, Duval flashed potential as a shooter. Of note was a catch-and-shoot 3-pointer as he spotted up from the corner, caught the ball, came to a smooth stop and fired away in transition. He hit another spot-up mid-range jumper a few minutes later, again showing solid mechanics with his feet set.

The potential is there, even though his career 26/111 shooting [23%] in 28 Under Armour Association (AAU) games show just how much room he has to grow in this area.

First I do form shooting to keep my form tight and to work on my technique, said Duval. I do about 100 shots in front of the rim. Then I move out to catch and shoot 3s to shooting off the dribble to moving without the ball and shooting. I work on pretty much everything.

The rising senior understands that making outside shots on a regular basis will help to open up the rest of his game. When peering through a shooters lens, his idols are point guards and some of the best shooters the league has ever seen.

I try to take Curry's shot technique and his release, said Duval. I try to take away Kyrie's calmness when he shoots the ball and how he rhythmically dribbles into his shot.

By no means was Duval the only lead guard at the Elite 24 who knows he has to become a more consistent perimeter threat.

Just staying in the gym - being dedicated, said Jalek Felton, another highly touted 2017 point guard and the winner of the Elite 24 3-point contest. My uncle (Ray Felton) wanted to work on mid-range and 3-pointers, but really just extending my shot so that I'm ready to shoot from anywhere. Most pros can shoot from anywhere on the floor. That's the goal.

Felton's form and consistency has improved over the past year. He is more confident pulling up, especially in the mid-range, and that has opened up more avenues for him to drive to the rim or to drive-and dish.

Jahvon Quinerly (class of 2018) is a 6'1 lead guard from Hudson Catholic in New Jersey who is filled with bursts of speed, but he knows he needs to work on his jumper.

Just getting the consistency and being able to knock it down every time I get an open chance, said Quinerly.

Hamidou Diallo, a 6'5 wing in the class of 2017, is one of the most athletically gifted players in his class. Diallo thrives on straight line drives to the rim, where he is capable of finishing with power or finesse.

As athletic as he is, Diallo knows that his jumper needs to become a weapon instead of a liability, as evidenced by his 11/55 shooting (20%) from beyond the arc in 20 EYBL games this spring and summer.

When you move on down the line to someone like 6'7, 230 pound rising [bully-in-the-paint junior Zion Williamson there is attentiveness to the fact that things won't always be as easy as going 10/10 from the field for 23 points, as was the case in the Elite 24 game.

I have a jump shot and I've been working on it a lot, said Williamson. My body is physically advanced so I can always get to the basket right now, but when I get to college it won't be that easy and that's when I'll need to utilize my jump shot, so I still work on it.

Nick Richards (6'11 / class of 2017), showed glimpses of a developing mid-range jumper during practices this week. He displayed an understanding of moving his feet and flowing into his shot as the ball was passed to him and he showed nice touch, which is impressive given his size. Richards defends the paint with zeal like one of the players he likes to watch, Hassan Whiteside, and he watches film of Hakeem Olajuwon to study his post moves.

Lately, though there have been fewer post-ups and more outside shots, even for big men.

Confidence is one of the major keys to success for any shooter because it leads to belief.

And as that belief grows, a prospect's potential ceiling can rise to the point that nobody might have seen coming.