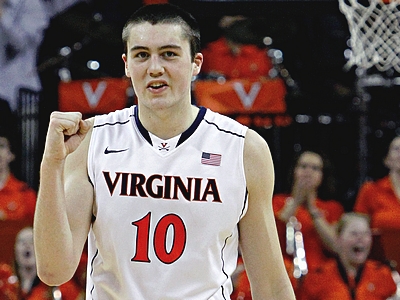 After watching Tobey intently at the USA Basketball U19 World Championship training camp this past June, we offered up the following scouting report. We prefer to wait and see how Tobey performs as a sophomore before adding to his profile.

A largely unheralded high school recruit, Ryan Anderson, unexpectedly blossomed into an immediate contributor for Steve Donahue at Boston College, averaging 11 and then 15 points per game in his first two seasons respectively.

Now as the third leading returning scorer in the ACC per-minute, and fourth best returning rebounder, Anderson will be expected to take his game to an even higher level as a junior, attempting to help Boston College return to the NCAA Tournament for the first time since 2009.

Anderson does not possess overwhelming physical attributes, which is likely one of the reasons he slipped between the cracks as a high school recruit. He has decent size at 6-9 in shoes, but has an average wingspan and a frame that could still stand to add more weight. He's not particularly athletic either, lacking great quickness or explosiveness, which hampers him somewhat in the college game, and will likely become more of an issue at the pro level.

With that said, Anderson is a versatile offensive player, possessing a fairly high skill-level that allowed him to emerge as one of the best scorers in the ACC last season, and should give him at least a fighting chance to make a NBA roster by the time he's finished at BC.

Anderson sees his touches in a multitude of ways, be it on post-ups, as a pick and roll finisher, off cuts, via the offensive glass, running the floor in transition, or spotting up in the mid-range area. He's a smart and fundamentally sound big man, showing nice passing ability, good footwork, soft touch around the basket, and the ability to move off the ball intelligently and contribute to his team's ball-movement.

His back to the basket arsenal is rudimentary, consisting mostly of short jump-hooks over his left shoulder taking advantage of his solid touch and the strength advantage he'll occasionally find against smaller matchups at the power forward position in the ACC. It's not something that's likely to translate to the highest levels considering his average size and athleticismhe gets his shot blocked a decent amount, and misses some make-able looks due to his below the rim style of play--but he can score effectively at times on the low block, and he gets to the free throw line at a great rate (7.2 times per-40).

29% of Anderson's field goal attempts came from beyond the 3-point line as a freshman, but as a sophomore he only took just 13 total attempts from that range. He instead shot a decent amount of mid-range jumpers, but wasn't terribly effective, making just 33% of his jump-shots on the season. Anderson doesn't have the prettiest shooting mechanics, as he takes a mostly one-handed jumper with his elbow flailing out to the side and a somewhat rigid release.

With that said, he shows decent touch on his jumper, so it's not out of the question that he develops this part of his game as his career progresses. It's something he'll likely need to in order to reach his max earning potential at the professional level (be it in the NBA or not), especially considering his athletic limitations.

The same can be said for his ball-handling skills, which are pretty solid for a college big man and help him draw a good amount of fouls attacking opposing big men off the dribble.

Defensively is where NBA scouts might struggle the most to project Anderson at the pro level. While he's a very intelligent player who uses his body and length as effectively as he can to take charges and play solid positional defense, he's limited somewhat by his lack of quickness and explosiveness. He has a difficult time staying in front of quicker big men off the dribble, will get backed down by stronger opponents, and isn't much of a presence inside the paint, blocking just 16 shots in 32 games last season.

Scouts will like how crafty he is sticking his elbow in his opponent's back at just the right time to get him off balance and help him come up with offensive rebounds, but his average length and vertical leap won't do him as many favors on the glass at the pro level.

All in all, Anderson is likely to be deemed a fringe NBA prospect upon finishing his time in college, but his skill-level and feel for the game will certainly help him get looks in the form of workouts, summer league invites and possibly a shot at making a team's roster. Continuing to improve his skill-level as much as he can between now and then and maximizing his physical potential will help his cause considerably, as will polishing up his defense.

After watching Thomas intently at the USA Basketball U19 World Championship training camp this past June, we offered up the following scouting report. We prefer to wait and see how he performs as a sophomore before adding to his profile.

Miller was the recipient of an extensive evaluation last year in the lead-up to his junior season. Unfortunately his progress seemingly stagnated, as not much appears to have changed since then, which is why we would prefer to wait before evaluating him again. 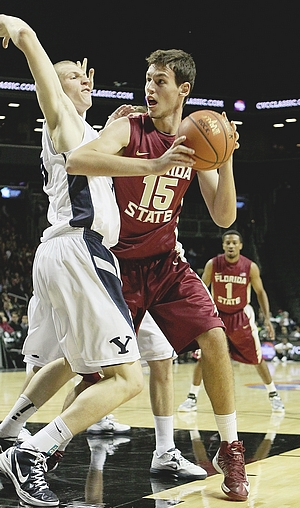 After emerging as an intriguing international recruit at Canarias Basketball Academy and following a dominant performance for Slovakia at the in the B division of the 2011 U18 European Championships, 7'3 center Boris Bojanovsky committed to play for Florida State, shunning offers from a host of other ACC programs.

He showed flashes of potential as a freshman in limited minutes, particularly on the defensive end, but rarely was consistent or productive enough to carve out a niche for himself in Florida State's deep frontcourt. Now, as a sophomore, scouts will watch to see if he's able to take the next step forward in his development, from exhibiting occasional glimpses of intrigue to posting consistent and productive minutes as part of a deep Florida State frontcourt rotation.

Even before he steps on to the court, Bojanovsky clearly passes the eye test, standing 7'3 with long arms and a 235-pound frame. He will have to continue to add significant bulk to his upper body, but his lower body strength appears farther along than one would expect. He is a fluid athlete for his size, as well, not particularly explosive around the basket or quick in the open floor, but mobile with good lateral quickness and agility.

Bojanovsky is still in a very early stage of his development and looks far from reaching his full potential at this stage. He was not particularly productive in the 11.1 minutes he played last season, scoring just 10.3 points per 40 minutes pace adjusted. He struggled with the physicality of ACC big men and was not able to finish many of the looks that were created for him around the basket, being somewhat turnover prone in the limited touches he saw.

Behind the numbers, however, Bojanovsky is an intriguing prospect due to his versatile skill set. Despite the fact that he is still raw on the offensive end of the floor, he displays solid footwork and the ability to score with his back to the basket. Though he does not do a good job of holding his position on the block due to his lack of strength, he has soft hands and shows the ability to execute some rudimentary post moves, particularly a step through that hints at what he may offer this coming season

The downside is that he lacks the strength to fight through traffic and the explosiveness to finish over defenders. At this stage, Bojanovsky looks far more comfortable finessing the ball to the basket, preferring tips and layups to dunks, which results in him playing, more or less, below the rim. It's also worth pointing out that he also passes out of the post on nearly 20% of his possessions, a testament to his court vision, but also to his passivity and timidity at this point in his career.

Bojanovsky also shows potential facing the basket, and can on occasion put the ball on the floor and get to the rim in a couple of dribbles. Additionally the sample size is very small, Bojanovsky can take and make shots from mid-range, showcasing a smooth stroke with range out to 20 feet. He also shot 75.8% from the foul line, perhaps an indicator that he can continue to develop this aspect of his game moving forward. After all, he took only nine jump shots as a freshman, four of which came from mid-range, and hardly enough data to proclaim him a jump shooter.

While Bojanovsky shows a lot of flashes on the offensive end of the floor, his instincts operating out of the pick-and-roll, where he saw nearly 23% of his possessions. He sets good screens, and has the ability roll quickly to the basket, oftentimes catching his man by surprise in the process. That said, he oftentimes fails to roll hard enough to receive the ball close to the basket and when he pops out on the perimeter, he rarely capitalizes on his open jumper, Simply put, while he shows quite a bit of potential in this area, has a long way to go before he fulfills this role for Florida State, let alone the NBA.

On the defensive end, Bojanovsky displays his share of potential and question marks. His excellent size and length allow him to disrupt shots around the basket and on the perimeter. He is a particularly adept shot-blocker, swatting 2.7 shots per 40 minutes pace adjusted, which ranks him among the best in our database. Furthermore, his ability to hedge quickly and aggressively on screens, as well as his ability to stay in front of, or at least trailing closely behind, slashing big men resulted in some impressive defensive stops.

That being said, his individual post defense could use some work, as he gets pushed around due to his lack of bulk and toughness and commits fouls to compensate; he must work on reducing his 4.0 fouls per 40 minutes pace adjusted as a sophomore. While he displays good lateral quickness for a player his size, he sometimes struggles to close out on shooters and displays lax fundamentals, particularly in terms of positioning.

Additionally and most problematic is his effort on the boards, where he grabs just 6.8 rebounds per 40 minutes pace adjusted. His fundamentals and intensity both seemed lacking at times, as he neither boxes out nor scraps for loose balls.

Bojanovsky, is as mentioned, a long ways away from being considered a legitimate prospect at this stage, but his combination of size, mobility, and budding skill leave room for optimism regarding the future. Getting stronger and maximizing his athleticism will certainly help him to better hold his own in the ACC, but so too will playing more assertively and capitalizing on what should be an expanded role as a sophomore. Scouts will be monitoring his development to see how his frame is filling out and whether he can become a little more productive for Florida State as a sophomore.
Read Next...