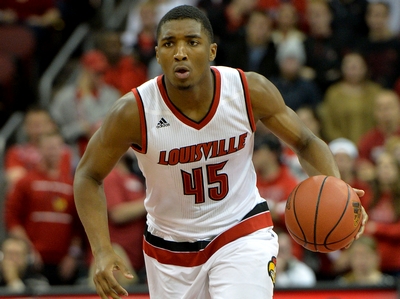 Without the benefit of extensive high school footage, we prefer to wait and see how Jackson performs as a freshman before adding to his DraftExpress profile, which already features three scouting reports breaking down his strengths and weaknesses, as well as an interview.

Without the benefit of extensive high school footage, we prefer to wait and see how Bradley performs as a freshman before adding to his DraftExpress profile, which already features a scouting report breaking down his strengths and weaknesses, as well as an interview.

A consensus top-35 high school recruit, Donovan Mitchell's freshman was mostly a learning process, as he averaged 7.4 points, 3.4 rebounds, and 1.7 assists per game Rick Pitino's 23-win Cardinal team that missed the postseason due to a self-imposed ban.

Listed at 6'3 with a strong 210-pound frame and good length, Mitchell as a bit undersized for a shooting guard, but compensates with tremendous athletic ability. Among the most explosive players in the country, Mitchell is a powerful two-footed leaper who provided plenty of highlight reel material last season. The New York native also possesses terrific lateral quickness, giving him intriguing potential on the defensive end. 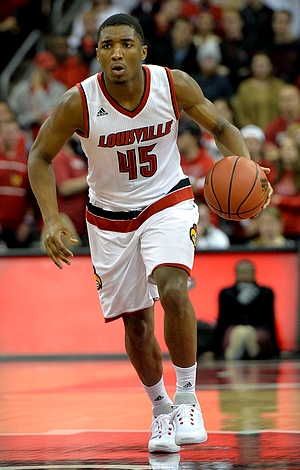 As a true freshman, it was Mitchell's ability to make use of his athletic gifts that led to his most significant contributions offensively coming off the Cardinals' bench. Playing primarily off the ball doing the majority of his scoring filling lanes in transition or spotting up on the perimeter, but also getting some opportunities to create in the pick & roll, Mitchell finished the year as Louisville's fifth leading scorer, averaging an above average .931 points per possession.

Offensively, Mitchell is a bit of a mixed bag. He was most effective as a finisher last season, shooting 59% around the rim overall according to Synergy Sports Technology as his explosiveness made him a threat to go up and finish lobs or explode over defenders to finish in traffic off the bounce. Attacking the rim with reckless abandon and being unafraid of contact, Mitchell has a powerful first step and proves capable of turning the corner with or without a ball screen at times.

The challenge for Mitchell last season was making sound decisions with the ball when he did opt to put the ball on the floor. He posted a positive assist-to-turnover ratio, and showed some advanced ball handling and drive and dish ability, but often looked sped up and wasn't always decisive enough to get all the way to the rim when penetrating, particularly when going left. His command in the pick and roll is a major work in progress and his ability to become a more capable shot creator for himself and others is a point of interest for scouts, as adding value as a secondary ball handler would really help his cause.

Part of Mitchell's struggles creating off the dribble are the result of his inconsistent jump shooting ability, as defenders frequently sagged off of him in the half court. Though there are some things to like about Mitchell's shooting mechanicsnamely that he usually shoots on balance and gets great elevation to go along with decent touchhis mechanical inconsistencies and lack of great fluidity led to inconsistent results. Knocking down just 27% of his catch and shoot jump shots in the half court, but 40% of his pull-up jumpers, Mitchell isn't an incapable jump shooter, and is actually quite effective from the midrange, but has a lot of room to grow as a 3-point threat.

On the defensive end, Mitchell's terrific physical profile gives him nice upside for the next level. His combination of strength and lateral quickness could allow him to defend both guard positions effectively, even if he'll give up some size to some NBA shooting guards. Getting lost and not always looking dialed in defensively last season, Mitchell has some work to do to reach his potential on this end. Despite his lapses, he did prove to be a pest at times too, as his physicality and quickness to the ball on the perimeter helped him disrupt opposing offenses in certain possessions.

Scouts will be keeping a close eye on the role Mitchell is asked to play this season. Losing Damion Lee, Trey Lewis, and Chinanu Onuaku to the pros, the Cardinals have a major void to fill offensively. It will be interesting to see if Mitchell can answer that call like Terry Rozier did in 2015, and what his performance in what figures to be a much larger role means to NBA draft stock.

One of the most gifted athletes in the college game, Donovan Mitchell is an engaging young man with interesting long-term potential. The 20-year-old Brewster Academy product figures to have a great opportunity to solidify himself as an NBA prospect this season. The development of his skill level playing on the ball is certainly worth keeping an eye on, as is his consistency on the defensive end.

Justin Jackson decided to test the draft waters and was invited to the NBA Draft Combine, but ultimately made the decision to return to North Carolina for his junior season after a poor showing and lackluster NBA feedback. Jackson will be one of UNC's veteran leaders this season after the graduation of Marcus Paige and Brice Johnson, and will likely be called upon to have a bigger role in the offense. He'll be looking to build on his draft portfolio after two solid, but not spectacular, seasons to start his collegiate career. 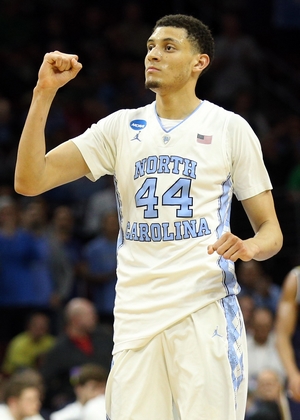 Jackson has nice size for the small forward position, as he was measured at 6'8 with a 6'11 wingspan at the Draft Combine. However, he is rail-thin at just 193 pounds, and will need to add more strength to his frame, especially in the lower body, to be able to be competitive at the next level. He will be turning 22 prior to the 2017 NBA Draft and there are definitely question marks about his ability to hold up physically over a long NBA season while competing against NBA wings. He's not an elite athlete, lacking a high level of open court speed or explosiveness, and will be relying more on his feel and basketball acumen to impact the game rather than his athletic ability.

A very good passer from the wing, Jackson was able to use his size and vision to average 3.9 assists per 40 minutes last game, third among returning small forwards in our top 100. He can make a variety of passes both from a standstill position and off the dribble, as he will make accurate post entry passes, swings the ball unselfishly on the perimeter, and always has his head up when leading the transition break. He limits his bad decisions, turning the ball over just 1.5 times per 40 minutes last season and his pure point rating of 2.67 ranked second among returning small forwards in our top 100. He doesn't always create separation from his man off the dribble to draw the help defense, but he can see over his defender and picks out the right pass in the flow of the offense to create good looks for his teammates.

Where Jackson needs to show some improvement in his junior season is as a spot-up shooter. Although his seemingly fundamental mechanics give him the potential to be a shooting threat, the results haven't ever really been there for him as he is just a 29.7% three point shooter in his collegiate career and knocked down only 29.9% of his 87 catch and shoot jumpers as logged by Synergy Sports Technology. He isn't great off the dribble at this point in his career as his handle can get a little loose and he isn't strong with the ball, which can lead to him getting stripped on penetration. He has shown the ability to hit a one dribble pull-up, but he will need to be able to convert his spot-ups to force defenses to guard him and open up potential driving or passing lanes.

Jackson has had some success scoring below the foul line, converting 58.3% of his shots at the rim according to Synergy Sports Technology. He's been able to score against half court defenses in several ways, whether that be with well-timed cuts to the rim, running off screens or chasing down offensive rebounds (2.5 per 40 minutes last season). While he can utilize his length to score over many defenders, he will need to show that he can score in the paint against NBA rim protectors as he has a propensity to shy away from contact, averaging only 3.4 free throw attempts per 40 minutes last season.

Defensively, Jackson is still a work in progress. His size and length will be an asset, but he really needs to fill his frame out to be able to play physical defense on the wing. While he has shown flashes of lateral quickness, he is usually straight up on the perimeter and easily knocked off balance on dribble penetration. He struggles to stay in front of his man and will give up on the play when his opponent is past him as he doesn't like to fight back into the play and contest shots in the paint.

He does have some length to close out on shooters on the wing, but he plays so far back off his man that he has too much ground to cover, and he also has a tendency to bite on ball fakes which can take him out of the play. He's already at somewhat of a disadvantage defensively with his relative lack of strength, and will need to improve his fundamentals to be able to have a positive impact on that end of the court.

After receiving plenty of feedback in the pre-draft process, Jackson will be looking to make some strides in his game to impress NBA scouts in his junior season. While he has displayed some offensive versatility, he hasn't yet demonstrated to scouts what he can hang his hat on in the NBA. There's a lot to like about his size and offensive instincts that still make him an attractive draft prospect, but he needs to make some refinements to his game this year to better define his potential role for NBA teams.
Read Next...