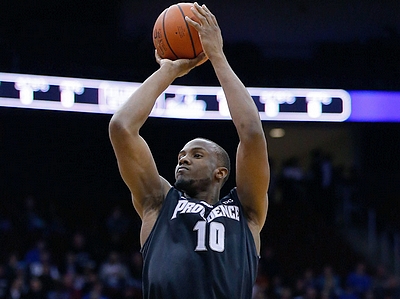 After averaging just 13 minutes per-game at UCLA last season, Joshua Smith elected to transfer to Georgetown. We've elected to wait for him to assume a larger role for the Hoyas (and see what type of shape he's in) before again appraising his NBA potential.

After watching Dunn intently at the USA Basketball U19 World Championship training camp this past June, we offered up the following scouting report. We prefer to wait and see how Dunn performs as a sophomore before adding to his profile.

One of the last players we wrote about during the 2012-2013 season, we'll wait for Cotton to suit up as a senior rather than rehashing many of the same things we discussed in our last report.

Kadeem Batts made a major jump in role during his junior season as he transformed from a role player to a much more integral part of the Providence offense, being selected along with Michael Carter-Williams of Syracuse as the Big East's most improved player. Batts increased his scoring output from 12.5 points per 40 minutes pace adjusted up to 18.7, playing nearly 32 minutes per night and regaining his status as a full time starter.

Batts made a series of improvements in his offensive game that allowed him to assume a much larger role. During his sophomore season, nearly 70% of his offense came from cuts, offensive rebounds, spot-up opportunities and in transition, according to Synergy Sports Technology. During his junior season that fell to under 50% as he generated much more of his offense himself, mainly in the form of post-up opportunities.

Batts post game isn't incredibly advanced, but he shows decent touch on a hook shot over his right shoulder. Standing 6'9" with solid length and a fairly developed frame, Batts does a good job creating space and dislodging his defender. He could, however, continue to add upper body strength, as he struggles at times when his defender is his match in terms of physicality, and a reliable move over his right shoulder would help him become less predictable. He also tends to struggle recognizing and reacting to double teams and tends to force himself into either tough shots or turnovers.

The other main area that Batts has improved in greatly has been on his perimeter shot. While still mostly 18 feet and in, Batts has turned this into a reliable option in his arsenal. According to Synergy Sports Technology, Batts scored 1.135 points per possession in midrange jump shots, which is more efficient than 97% of college basketball and a huge improvement over his previous two seasons.

This newfound ability from the perimeter has manifested itself mainly in two areas. First, it's his primary option over his right shoulder in the post, as he is comfortable with a turnaround jump shot in the lane. It also has made him into a pick and roll threat, something he wasn't much of in years past despite his good athleticism and hands. According to Synergy, he only got 4.4% of his offense in pick and roll situations as a sophomore, with this increasing to 12.6% last year on fairly good efficiency. The overall sample size on his midrange jump shots was still relatively small, so there is some concern whether or not he can sustain this, but it's a good sign in his development.

Outside of that, Batts is still effective off the ball, showing an ability to score off cuts and from offensive rebounds. He moves well off the ball and has good, soft hands, with a quick jump and doing a good job of going up strong. His 3.7 offensive rebounds per 40 minutes pace adjusted was by far the worst mark of his career at Providence, likely more a result of his changing role and generating more offense for himself than a loss of skill, as he was a prolific offensive rebounder in year's past.

Batts also finds ways to contribute on the defensive end, despite not being much of a shot blocking threat. Batts is a good post defender, able to hold his position well and using his length to effectively challenge shots. He plays angles well and uses his length well when defending the pick and roll, allowing him to effectively defend the pick and roll despite possessing just average lateral foot speed.

Batts took a major step forward in his game during his junior season, with his development as a post scorer and a midrange shooter allowing him to assume a much larger role in the Providence offense. If Batts is able to further refine his post game and prove that his greatly improved midrange game is here to stay, he could find himself competing for a spot in the NBA at this time next year. 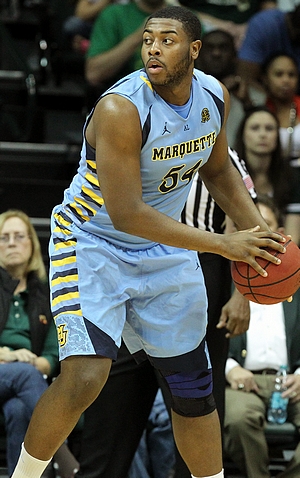 Davante Gardner was expected to take on a larger role in the Marquette offense last season after the graduation of Jae Crowder and Darius Johnson-Odom. His production level plateaued from his sophomore to junior season, though, as any substantial improvement in his skills was hindered by an inability to stay on the floor-- as he was only able to average 21.5 minutes per game. Gardner posted 11.5 points per game on 58.5% shooting with 4.8 rebounds per game, but his production per 40 pace adjusted of 21.9 points and 9.2 rebounds shows his potential if only he could find a way to stay on the court for longer stretches.

Gardner's inability to stay on the floor is not related to foul trouble, as he committed only two fouls per game last season. Instead, it has to do with his stamina, which, at 290 pounds, he has struggled with for his entire collegiate career. Gardner likely won't be asked to play more than 20 minutes on any NBA team he lands on, but if he cannot play more than this amount in college, scouts will have doubts that he can contribute while playing at the much faster pace of a NBA game.

One area where Gardner will have to show value to scouts is rebounding, particularly on the offensive end. His 3.9 offensive rebounds per 40 pace adjusted are merely average for a player of his size and actually represent a decrease from 5.2 his sophomore campaign. Since he doesn't have the physical attributes to just up go up and get the rebound, he has to rely on reading the ball coming off the rim and positioning to grab the loose ball. However, this means his effectiveness can be mitigated on this end by more athletic players, who can outjump him even if Gardner gets position.

On the defensive glass, he is not much better, as he grabbed only 5.2 defensive rebounds per 40 pace adjusted, one of the lower rates among NCAA center prospects. This will be a key skill for him going forward, so he will need to show a greater willingness and ability to rebound on the defensive end his senior season.

Defensively, there are significant questions about Gardner's potential at the NBA level. He will likely have to guard post players in the NBA and he will be at a major disadvantage due to his size. Although he has a nice wingspan to complement his frame, it might not be enough to bother most NBA centers, and he almost certainly won't be much of a paint protector, as he struggles to get off the ground. Outside of the post, he has surprising agility for a player his size, but will likely still struggle to stay in front of perimeter oriented big men, as he doesn't move well laterally to cover dribble penetration. When he closes out on shooters, he is often a step late on challenging shots. Even if he is able to recover and challenge the shot, bigger players are able to easily shoot over him without being bothered.

Looking forward, Gardner faces an uphill road if he wants to find his way onto an NBA roster next season. His first priority has to be improving his conditioning and demonstrating he is able to play more minutes at the pace of a collegiate game. There are plenty of holes in his game, so he will need to demonstrate value to scouts and show how he can compensate for his smaller size while filling a specific need for a NBA team.
Read Next...