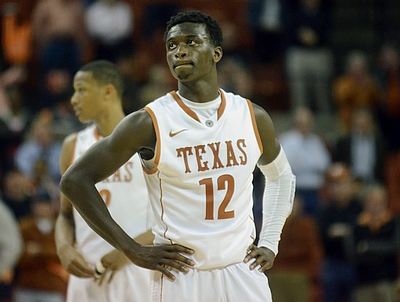 Kyle Nelson
@KNelsonDX
Myck Kabongo has elite size and speed for a point guard prospect, but struggled to score in an efficient manner during his shortened college career. Where will that leave him on draft night?

When Myck Kabongo announced that he was entering the 2013 NBA Draft and hiring an agent, many in the basketball world were confused. Despite his elite recruiting ranking, he struggled as a freshman and lost a majority of his sophomore season to a 23 game suspension for receiving impermissible benefits from an agent and providing false statements to NCAA investigators. Even though he had a few solid outings after his return, Texas largely disappointed with Kabongo at the helm, losing five of its last 11 games before ending the season with a loss to Houston in the College Basketball Invitational. Surely, the plunge straight into the heat of the Big 12 conference slate did Kabongo few favors, but his continued inconsistency as the season went on and his average performance at the NBA Combine solidified the notion that the sophomore point guard has a lot of ground to make up before draft night.

At 6'3 with a 6'6.25 wingspan and an 8'2 standing reach, Kabongo possesses good size for an NBA point guard. He has a wiry 180-pound frame, though it is worth noting that he has gained 20-pounds since his junior season in high school and he looks like he can continue to add bulk in time. Extremely quick and agile off the dribble in the half-court and in transition, he lacks ideal explosiveness and body control around the basket, which hampers him as a finisher around the rim.

While Kabongo certainly has an above average physical profile for an NBA point guard, his skill set on the offensive end of the floor raises its share of questions. For one, he is a very high usage player, commanding 23.3% of Texas's overall possessions, but he is not particularly productive, averaging just 15.2 points per 40 minutes pace adjusted and ranking as one of the least prolific scorers in our top-100 rankings. He was not particularly efficient, either, registering just a 45% effective field goal percentage, which ranks him among the five worst prospects in this draft in that category.

That being said, Kabongo played 37.3 minutes per game, (second most among prospects in our top-100) on one of the worst offensive teams in the Big 12 this season, being forced to shoulder a very heavy load in the middle of the season that he clearly wasn't ready for.

It's hard to ignore his two most glaring weaknesses on tape, however, weaknesses that unfortunately are two skills that point guards must have in their arsenals to crack an NBA rotation. For one, he remains a well below-average shooter. According to Synergy, he made only 30% of his jump shots during his sophomore year, down from the 31% he made as a freshman. On film, his mechanics need significant work, as he gets most of his power from his arms rather than from his base. He does not elevate particularly well either, which results in him pushing a high-arcing shot that tends to miss its mark more often than not.

Another weakness lies in his struggles to finish around the basket. Kabongo actually excels at getting to the rim out of the pick-and-roll, where he uses his solid ball handling ability and quick first step to get by his opponent. He also similarly does an excellent job of running the floor in transition and using his quickness and agility to make easy lay-ups. Yet, once at the basket, he isn't able to finish what he creates. He has no left hand and struggles with contact due to his lack of elite strength and explosiveness, which means that he oftentimes is forced to throw up a difficult shot through the trees or gets blocked on his way to the basket. According to Synergy, he made just 41.2% of his shots around the basket, which is one of the worst rates in this draft class.

Additionally and while has improved at finding shots for himself around the basket and on the perimeter, he still lacks a mid-range game and rarely, if ever, uses his size to his advantage against smaller players. There were a few occasions where he pulled up off of the dribble from behind the arc, but he has a long way to go before standing out in the NBA as a shot creator. When combined with his sub-30% perimeter shooting and his below average percentages inside of the arc (46% 2P%), scouts are left with a particularly bleak picture of his ability to score effectively at the next level.

While Kabongo struggles to finish around the basket, he does an outstanding job of getting to the foul line, to the tune of 7.0 free throw attempts per game, which ranks seventh among prospects in our top-100. Additionally, and perhaps a sign of hope in regards to his shooting woes, is the fact that he shot a solid 79.2% from the foul line as a sophomore, up from 68% during his freshman season.

While his offensive skill set leaves much to be desired, he is much improved as a point guard, in ways that may significantly help his prospects on draft night. At first glance, the numbers do not look good, particularly his 3.5 turnovers per 40 minutes pace adjusted, the fact that his assists per 40 minutes pace adjusted dropped from 6.7 to 5.8, 1.65 assist/turnover ratio (down from 1.73 as a freshman), and his 0.80 PPR. He hardly stands out from the middle of the pack by the numbers, but on film his instincts and decision making skills have both improved.

For one, he looked far more comfortable operating out of the pick-and-roll, thanks to his excellent speed and strong ball-handling skills. Additionally, he is a very sound distributor in the half court, particularly while attacking the basket and kicking the ball out to open teammates. Texas's disorganized half-court offense and Kabongo's own mediocre shot selection and finishing woes around the basket have a way of obscuring the fact that he has made some intriguing strides as a sophomore, but there are clearly some things to work with here. As we noted in the past and as was the case during his sophomore season, he simply must improve his jump shooting and mid-range game, which until then will ultimately hinder his development as a point guard in the current NBA style of play.

Kabongo is a much better prospect on the defensive end. For a point guard, he shows solid lateral quickness, which when coupled with his solid height and length, allow him to be a very good individual defender at the collegiate level. Additionally, he is very aggressive on the defensive end of the floor, attacking passing lanes for steals and dialing in on his man in one-on-one situations. He tends to lose his focus while defending the pick-and-roll, however, ducking under screens or occasionally simply giving up on the play. That being said, he usually does a good job of staying involved, even off of the ball, perhaps best exemplified by the fact that he is a very good defensive rebounder for his size, and his 4.5 defensive rebounds per game situate him third among PGs in our top 100

Kabongo's draft prospects are quite murky at the moment despite the significant reputation he came into college with. His Pre-Draft Combine performance did little to silence critics of his shooting ability, and while he played in only 11 games as a sophomore, he was wildly inconsistent as a freshman as well. Without the benefit of an out of conference schedule, particularly the opportunity to prove himself against the likes of Georgetown, Michigan State, and UCLA, scouts are left wondering just how Kabongo will fare against NBA-caliber competition on a nightly basis. He could have used the New Jersey Combine as a place to improve his draft stock showing off his floor general skills in a five on five setting, but curiously decided to turn down that opportunity.

Additionally, his sophomore struggles are compounded by the fact that he will turn 22 during his NBA rookie season, and is a full year older than many in his class.

Yet, what is also clear is that Kabongo, perhaps more than most prospects in this draft, has a higher ceiling relative to his current draft stock, which situates him as one of the more intriguing players in the second round. The recent successes of Texas guards such as Cory Joseph and Avery Bradley, neither of whom excelled at the collegiate level, but have since gone on to earn important minutes on championship contenders, help his case, as well.

With their trajectories in mind, Kabongo's troubles at the collegiate level may not be entirely his fault, especially considering what might be a larger problem of Rick Barnes's seeming inability to develop elite talent in Austin. After all, he waswas a top-10 recruit in the RSCI class of 2011, ahead of projected lottery picks Ben McLemore, Otto Porter, Cody Zeller, Michael Carter-Williams, and Kentavious Caldwell-Pope. That being said, where those players have significantly improved on their weaknesses coming out of high school, Kabongo thus far has not. Whether or not he develops into an NBA player, remains to be seen, but what is clear is that he has a long way to go in addressing his shortcomings before being able to utilize his many strengths at the next level.
Read Next...