What Did We Learn At the Champions Classic? Part 2: Michigan St-Kansas 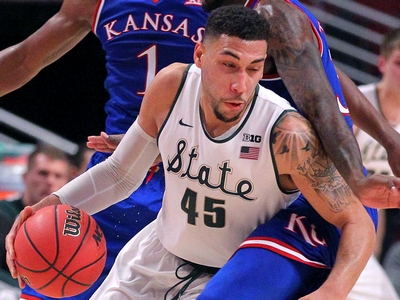 
With a horde of NBA scouts and executives in attendance, Denzel Valentine had perhaps his best game in a Michigan State uniform, posting a triple double and completely taking over in the second half to lead his team back from a double digit deficit to victory.

If Valentine didn't bring the ball up the floor for Michigan State, it didn't take long for the ball to either be swung to him to initiate the offense, or for a set play to be run to get him a jump-shot, as he ended up scoring or assisting on 57 of Michigan State's 79 points.

Valentine's elite combination of ball-handling, footwork and ability to operate at different speeds made him extremely difficult for Kansas to stay in front of, as he is liable to thread the needle with a perfect pass, pull-up for an off-balance jump-shot, or hit some kind of circus floater/runner/sky-hook from all kinds of angles inside the arc. Kansas tried every strategy possible to slow him down on the pick and roll, but he would just wait patiently to see how the defense would react, keep his dribble alive, and then make the correct read to continue to frustrate them.

In addition to his ability to handle the ball and find the open man, its Valentine's shooting ability, both with his feet set and off the dribble, that make him such a versatile offensive player. Michigan State repeatedly ran him off quick-hitting screens to free him up for perimeter looks, and he hit a number of difficult pull-ups with a hand in his face when the defense closed out too aggressively.

While Valentine does not possess prototypical NBA athleticism or a great frame, his productivity, skill-level and basketball IQ make him very appealing as a pro prospect. We didn't get a great chance to evaluate his defense, as Kansas' anemic backcourt made him easy to hide and save for the offensive end, and he did struggle somewhat finishing around the basket due to his lack of explosiveness, despite his elite shooting touch. Nevertheless, Valentine's ability to play a variety of different roles, along with his fearless style of play, make it increasingly difficult to count him out as a first round prospect.

Mykhailiuk may be disappointed with the fact that he was the third player off the bench for Kansas and saw only 12 minutes of action, especially considering how poorly Kansas' alternatives at his position played. Mykhailiuk showed some glimpses of his talent and versatility in his limited action, making a very nice post-entry pass to Landen Lucas on his first offensive possession, and then grabbing a defensive rebound in athletic fashion and pushing the ball himself all the way to the basket for an aggressive layup. He also had one very nice block in transition, demonstrating his athleticism, and had another nice hustle play where he eliminated an easy layup by a Michigan State player by digging down on the post, swiping and deflecting the ball off his leg.

It wasn't all positive for Mykhailiuk, though, as he struggled to create good looks in the half-court in limited opportunities, driving into brick walls and throwing up an air-balled pull-up on one occasion, and an air-balled floater on another. He also got lost at times on defense in both the half-court and full-court, which clearly drew the ire of Bill Self and likely contributed to his limited playing time. Still only 18, and a year and a half younger than teammate freshman Carlton Bragg, despite being a sophomore, Mykhailiuk is clearly still at an early stage of his development. But that's exactly the reason he decided to come play college basketball instead of signing a lucrative contract in Europe, so he could play through his mistakes. Unfortunately for him, he's still 2-3 years younger than the other wing options seeing time in front of him at the moment, and is thus paying the price for his lack of experience.

Perry Ellis will play a huge role in how far Kansas goes this season, and it became clear very early on in this game that a significant part of their offense will be built around him. Ellis needed 18 shots to get his 21 points, but showed his versatility as a college player, scoring inside the post with his back to the basket and an array of moves, attacking in a straight line from the perimeter, and finding easy baskets off broken plays. He hit a pull-up 3-pointer and a long catch and shoot 2, which is a good sign considering the transition he'll likely eventually have to make at the pro level to being more of a perimeter oriented player at his size, but struggled to score as a transition ball-handler, demonstrating some of his limitations athletically and skill-level. His defense was fairly average as well, as he got posted up on a few occasions and was scored over due to his lack of size and length, and also struggled when forced to switch out onto the perimeter on pick and rolls. All in all, this game didn't tell us anything we didn't already know about Ellis, as he's a very well-known player at the college level.

Selden looked very much like the same player we saw as a sophomore, really struggling to make his presence felt on either end of the floor. He looked passive for long stretches of the game both offensively and defensively, and continues to have a difficult time creating good looks and using his strong frame to his advantage. Selden shot just 39.5% from 2-point range last season, and went just 1-6 on the evening inside the arc, many of those coming inside the paint.
Read Next...