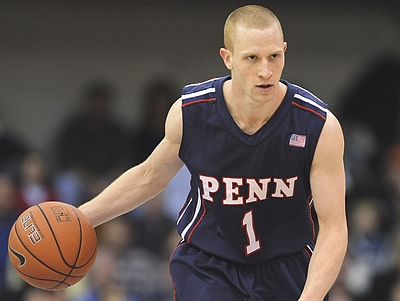 Zack Rosen
@DraftExpress
Yesterday I walked in the 256th Commencement of the University of Pennsylvania. While a majority of the guys going through this draft process have vacated their respective schools to train at select spots throughout the country, I decided to stay here in Philly so I'd be present to walk in my graduation. The four years that I've spent at Penn have really shaped who I am as a person and I thought it extremely important to go out with the people who influenced me and shaped my perspective- classmates, professors, teammates, administrators, and religious figures alike. So a special shout out to all of the people who made my experience at the place that Ben Franklin founded an extremely special and rewarding one. You know who you are. Thank you.

Graduation has been a time of excitement and celebration, but I've been grinding on the hardwood. I've been spending long hours in the gym getting my work in and honing my skills. My roommate and I have been playing a ton of 1 on 1 and as a lot of our opponents over the last four years can attest to, there aren't many guys in the country (I don't care where it is or what level) who can guard like Rob Belcore. The guy looks like a football player and he can barely get over a piece of paper but dude has some serious toughness, exceptional anticipation, and a will like no other. So we play one dribble games from the elbows, two dribble games from the wings and top, and then some live dribble games, and we beat each other up for an hour or so. The games are ultra-competitive and I'll leave the results out of this

Also in the way of training, a new tool has come into the repertoire for me and that is Synergy Sports Technology (Synergy). Synergy is used by almost everyone in the professional basketball ranks and it's the most comprehensive game footage tool out there. You can literally watch all clips of any college or NBA player in any situation.

I've been living on the thing for the past two weeks, specifically watching Steve Nash in pick and rolls, Goran Dragic and Jose Juan Barea in isolation plays, and Kirk Hinrich and Ray Allen in spot up situations. You can learn so much from the film and in addition to watching some of the pros, I have watched all of my footage from this season. While my game has really evolved throughout my college career, I'm so excited for the next level because there's a lot of areas in which I can improve. The intricacies. The little tricks. Now that basketball is the only thing I really have to focus on, I'll be able to get that much better on a daily basis. Thank you Synergy!

[editor's note: Synergy offers a service for fans, as well as professionals]

In the absence of schoolwork and exams, I've had the opportunity to catch up on some personal reading and go back to some books I really love. I'm big on giving and making those around you, in every walk of life, better. With that, I'd like to share some of the books that have drastically impacted my life in the hope that you might pick them up and get to reading.

Seth Hauben, a former Division 3 All-American and a teammate of mine in the Maccabi Games three summers ago, suggested that when we got home from Israel I pick up Lone Survivor by Marcus Luttrell. Great call Seth. The book is the story of a Navy SEAL who is the only survivor of a mission in Afghanistan and it provides true insight into the military and America's approach to war. Lone Survivor is probably the best book I've ever read.

Uncommon by Tony Dungy is another one of my favorites. My teammate and role model Dau Jok lent it to me two years ago and I haven't managed to give it back. Coach Dungy's message is simple: you have a purpose in this life that is divine and you must be willing to be different. In order to truly fulfill your destiny, you must go left when everyone else is going right and dare to be an uncommon man.

Lastly, The Winner Within by Pat Riley is a classic and a great selection for anyone trying to harness their inner competitor. A main takeaway from Riley is his opinion of sympathy, stating that sympathy is like junk food- it has no real nourishment.

Riles' Rule on Beating the Sympathy Syndrome is: Giving yourself permission to lose guarantees a loss. If you don't steel yourself to other people's sympathy, you cheat yourself and your team. Shoulda, coulda, and woulda won't get it done. In attacking adversity, only a positive attitude, alertness, and regrouping to basics can launch a comeback. These three selections should get you started. If you're interested in some additional titles, hit me on twitter.

Aside from attending graduation, staying in Philly has meant I can catch the 76ers playoff run. Last week, when Andre Iguodala hit those two free throws to advance the Sixers into the second round of the playoffs, I was so damn happy for the guy. He takes an exorbitant amount of criticism in this city and people simply hate on him.

Sitting in the second row at the Wells Fargo Center that night, witnessing the place standing and applauding the team with special recognition of Iggy's efforts, it was just a special moment for a star athlete. I was at the game with my agent and his family and we stuck around afterwards to chat. I saw a lot of familiar faces and as we were walking out, Sixers assistant coach Brian James grabbed me and congratulated me on a great season. He pointed out to the court, looked me in the eye and said, Hey man, you can do it. This NBA thing is for you.