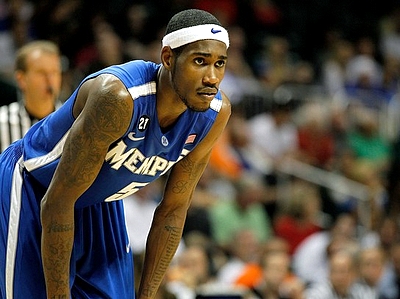 Kyle Nelson
@KNelsonDX
An interview with Memphis sophomore Will Barton discussing his improvement this season, how the draft process has played out for him in recent weeks, what he brings to the table at the NBA level, and more 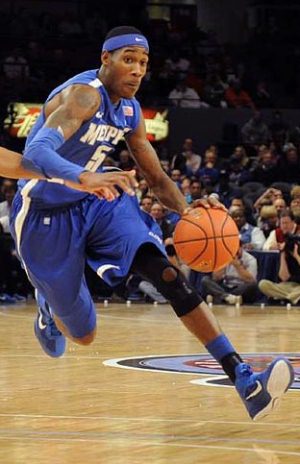 Kyle Nelson: Thanks again for talking to us, Will. How's everything going?

KN: You're out in Chicago, right?

KN: Who have you been training with?

Will Barton: John Lucas in Houston.

KN: What have you been working on? What's your average day of training look like?

Will Barton: Just, everything, really just getting after it. Working on shooting and my shot, ball handling, defense, passing, I mean every aspect of my game.

KN: So, how long do you train for?

Will Barton: Every morning we work out at eight. Eight to 10. Eight to 11, sometimes. 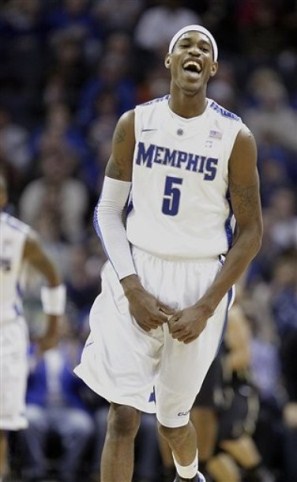 KN: A lot of the questions that scouts have are about your weight. You were 160 pounds in high school and you were listed this year at 175. How much have you been working on your frame?

Will Barton: I do what coach has. I go to the weight room and we lift. With me, I'm never going to be a big pound guy, but I'm putting on strength. It might not show body-wise, but it will show when I'm attacking the rim and I'm finishing with bumps and I'm still playing physically. So, that's what we're concerned with.

KN: Where are you right now weight-wise?

KN: So, how important do you think it is going to be for you to continue getting stronger as your career progresses?

KN: There was some talk when you entered the draft that one of the reasons you decided to leave Memphis was that you did not exactly see eye to eye with coach Josh Pastner. How much truth is there to that, and is that something that's come up in interviews with NBA teams thus far?

Will Barton: There's no truth in that at all. That's 100% false and it never came up in any of my interviews. I've given a dozen interviews and no one has ever said that they heard that, so I don't even know where that came from.

KN: Thank you for addressing that. So, what were some of the things that you learned from Coach Pastner?

Will Barton: I learned that doing things the right way will pay off for you in the long run. I learned how to stay positive throughout anything and just to work hard and how to be a professional.

KN: How else did Coach Pastner and the coaching staff at Memphis help you to prepare for the NBA?

KN: Many people considered it a foregone conclusion already mid-way through the season that you will be leaving Memphis. Was does indeed the case? What were you thinking this year?

Will Barton: I think people thought that just because I was producing. It didn't have anything to do with coach; it's just that I had a phenomenal year. The whole year, I wasn't concerned about the NBA. All I was worried about was my team winning and me producing and being a leader and just showing it. That's really all I was hoping to do.

KN: You improved a lot between your freshman and sophomore seasons. What did you work on during the off-season and how do you think you got better?

Will Barton: I really just worked on everything. I stayed in Memphis. I didn't go home. I was just really focused on working out and coming back better than ever. I worked a lot on my shooting and I worked on me having better decision making and competing, playing hard. I just got back to playing hard and attacking and being me on the court and having fun and going all out.

KN: You guys were maybe the hottest team in college basketball over the second half of the season. A lot of people picked you guys to make a deep NCAA Tournament run. What it was it like being inside the locker room right after you were knocked out in the first round against Saint Louis?

Will Barton: We were devastated. We were sad. We were upset and we were kind of stunned. That was probably one of the saddest days of my life if not first. We were hurt. We were hurt by it.

KN: Did that moment influence your decision to enter the NBA Draft?

KN: What ultimately influenced your decision, then?

Will Barton: Going over it with [Coach Pastner] and my family. I felt it was the best decision for me. It was always my dream to play in the NBA and I felt like it was time. I had a great season at Memphis and I thought it was time for me to take on a new challenge.

KN: What was it like paying alongside of your brother [Memphis reserve guard Antonio Barton] and what kinds of advice has he had for you throughout this process?

Will Barton: It was just great, man. Playing with him was the best thing in my life. Having him right there on one of the biggest stages besides the NBA, to me, and getting to play with my family is something that I'll never forget and always cherish. It was great having him there and I can always count on him for advice. He keeps me level headed. Through the process, he was the one who told me that I was ready. He said that he felt like I should go and that I did all I could as a college basketball player besides, you know, winning a national championship. He felt like I was ready.

KN: You mentioned your shooting earlier. You shot 27% from beyond the arc as a freshman and 35% last year. Was your improvement simply due to more getting up more reps or did you change your mechanics at all?

Will Barton: Just getting up more reps and staying more disciplined on my shot.

KN: How important do you think developing your jump shot is to your long-term success at the next level?

Will Barton: I think it's really important. With my driving ability and playmaking skills, I think that if I can consistently knock down the jump shot I'll be even more dangerous on the offensive end.

KN: Unlike some prospects, you've already conducted a decent amount of NBA workouts thus far. What can you tell us about the teams you've visited and how have those workouts gone?

KN: What teams have you worked out for so far?

KN: What kinds of feedback have you gotten so far?

Will Barton: That I'm doing really well and competing hard, making a lot of plays, defending well and that I can be a first round pick.

KN: What are your thoughts on the workout setting as a place for you to show off your strengths as a basketball player? Is it an ideal setting, or would you prefer five-on-five competition?

Will Barton: I'm cool with either one. I like five-on-five and I like how the workouts are set up. I think the workouts are for you to come in here and to show how hard you can compete, what kind of person you are, and I think they want to see you work hard. They pretty much know your game. They've been watching you the whole season and your numbers and your stats speak for themselves. They already know what you can do, as far as your skill set and talent-wise. I just think they want to know how you compete against other guys and what kind of person you are and what kind of personality that you have.

KN: What do you think your biggest strengths are as a player? How do you sell yourself to an NBA GM?

Will Barton: I think one of my biggest strengths is my versatility, playing guard from one to the two to the three. I can play the [point guard, shooting guard, and small forward positions] and a lot of scouts like that and they see that and it makes me more appealing, being a 6'6 guy with a lot of length and athleticism who can do a lot of things on the court.

KN: Looking at the NBA, is there a player who you model your game after and who you compare well with stylistically?

Will Barton: Kobe [Bryant] is my favorite player, but I don't try to compare myself to him obviously. I would say that I probably compare to a young Larry Hughes in his prime, MarShon Brooks, and maybe Marquis Daniels, with his size and the defensive things he does. I really think that I have my own unique style, though. I really don't try to compare myself to anyone. I just try to be me.

KN: You mentioned that you played PG, SG, and SF positions in college and that you can play three positions in the NBA. What do you see yourself playing at the next level and what have teams told you about your position in the NBA?

Will Barton: Teams think I'm a pure [shooting guard] and when I'm hitting my shot I'm really dangerous. I'll play whatever my coach wants me to. Like I said, my versatility is what's making me really appealing. At any time, you can put me at one of those three positions and I'll be effective. So, [shooting guard] is my position but I'll play whatever the coach needs me or wants me to do.

KN: Are there any things that you think people don't know about you as a person or as a basketball player?

KN: Well, thank you again, Will, and best of luck preparing for the draft.

Will Barton: Thanks for having me. I've been keeping up with the site this year and last year. Keep up the good work, man.

We got the chance to sit down with Barton at the NBA Combine in Chicago during the media availability at that event as well.

Video filming and production courtesy of Tad Hathaway of 312 Media.
Read Next...