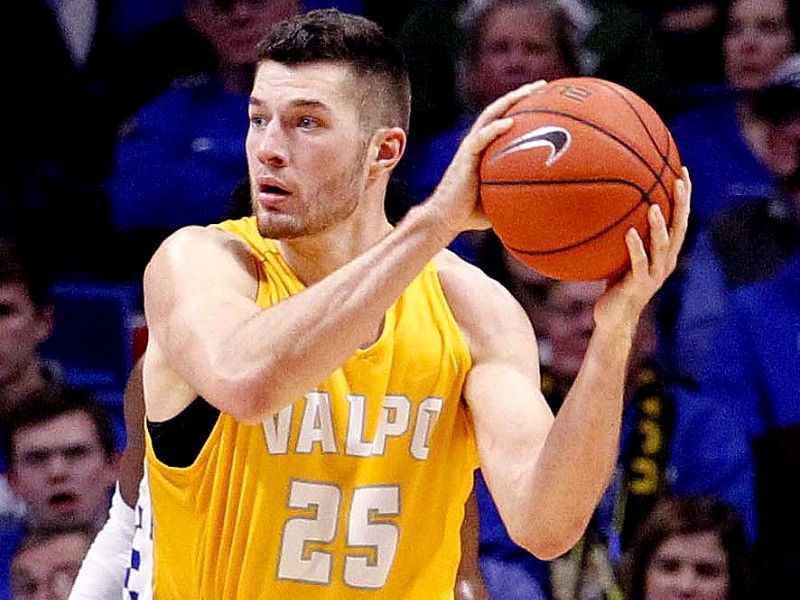 After testing the waters for the 2016 NBA Draft before ultimately choosing to return to school for his senior season, Alec Peters was rumoured to be a possible graduate transfer for several high major programs, as his head coach Bryce Drew had left for Vanderbilt. Instead, he choose to return to Valparaiso for his final season and has become a strong example of NCAA player development by increasing his production each of his four seasons, culminating in averages of 25.6 points and 11.3 rebounds per 40 minutes on a 60.4% true shooting percentage as a senior.

His senior season ended unceremoniously, with Peters missing the final four games of the season with a stress fracture in his right leg, resulting in his team losing in the first round of their conference tournament. The injury robbed casual fans and NBA scouts of seeing him in the NCAA Tournament, and will likely prevent him from partaking in the pre-draft process. Still, NBA teams have plenty of film to properly evaluate Peters, with Valparaiso playing a strong out of conference schedule this year against the likes of Kentucky, BYU and Oregon, among others. He also had an outstanding showing at the Nike Academy last July, where he was matched up against many of the top players in college basketball, in front of a horde of NBA scouts.

Here's a closer look at the strengths Peters displayed throughout his time at Valpo:


Peters' clear cut NBA skill is his shooting potential for his size, as he made 2.7 threes per 40 minutes at a 41.2% clip in his four year career. He's an excellent catch and shoot player who is also capable of knocking down shots on the move, as he is able to square his feet and release his shot in one fluid motion off the catch, giving him added value as someone who can come off screens or pick and pop, in addition to spacing the floor as a spot-up shooter.

What will be crucial for Peters in his development is finding ways to score beyond his jump-shot, despite his average physical tools and athleticism. Measured at 6'9 with an average 6'9.5 wingspan, Peters will have a transition to make in getting his shot off against long-armed NBA athletes, especially around the rim. He doesn't possess a high level of quickness or explosiveness and combined with his average length, Peters has struggled to be productive around the rim when matched up against NBA caliber defenders.

With that said, Peters was much more than a jump-shooter for Valpo this season, with 44% of his shots coming from post-ups or shots around the basket as logged by Synergy Sports Technology. While he has finished at an impressive rate of 56.1% on these shots for the entire season, he hasn't converted as easily when matched up against frontcourts that possess NBA length. He will need to be craftier with his finishes around the rim to overcome his relative lack of explosiveness and length to find ways to score efficiently around the rim at the next level. He is comfortable drawing contact and getting to the line. as he averaged 7.6 free throw attempts per 40 minutes, which helped him generate points at the college level, especially with how accurate he is from the line, converting 85% of his free throws in his career.

There are question marks about how this will translate to NBA settings, though. Peters became increasingly comfortable putting the ball on the floor and shooting off the dribble as his college career moved on, even if he still has some strides to make in this area, converting 32.8% of his 64 pull-up jumpers according to Synergy Sports Technology. He can get to his spots with one or two dribbles before getting his feet under him to get off a good shot from inside the arc, but will need to prove he can be effective against quicker, longer defenders.

Peters improved his passing considerably as a senior, posting a career high 2.6 assists per 40 minutes last season and 15% assist percentage, displaying his unselfishness and feel for the game as someone who can see the floor and is willing to distribute within the flow of the offense. Many of those assists came from a standstill position, and if he can become a better passer on the move, he will have several ways to break down the defense when attacking a hard closeout.

Here's a closer look at the weaknesses Peters displayed throughout his time at Valpo:


While Peters' offensive value is crystal clear, the biggest question marks scouts have revolve around his ability to hold his own defensively. He may struggle to overcome his lack of elite physical tools defending in one on one situations, as he lacks a degree of lateral quickness staying in front of athletes on the perimeter, and doesn't have great size or length defending bigger players around the basket. He was a non-factor as a rim protector (0.4 blocks per 40 minutes this season) at the low-major level, and has never generated many steals, raising questions about which position he will guard and how he will fare against NBA level athletes.

On the bright side, he does play well within team defensive principles, and is undoubtedly a competitor. He works hard, knows where to be on the court, rotates well, and has a good nose for the ball to help him be first to loose balls and rebounds that fall below the rim. His average athleticism may prevent him from being a lockdown defender, but he should be able to pick up team concepts quickly and find ways to contribute on that side of the court with his competitiveness, activity level and solid IQ.

Peters has been an offensive force at the college level throughout his career, ending his senior season by being the second highest scorer in our top-100. NBA teams will surely covet his ability to make shots along with his feel for the game, which will give him an opportunity to carve out a role at the next level. Peters is lauded for his outstanding work ethic and has improved each of his four seasons at Valparaiso, which gives him a great chance to stick on an NBA roster long term if he continues to make strides defensively.
Read Next...