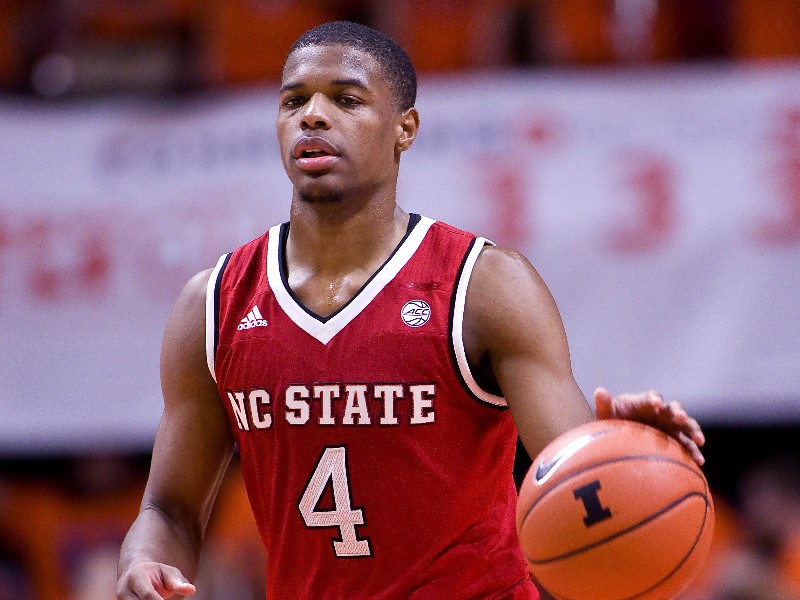 Fifteen months removed from tearing his ACL, Dennis Smith started what would become an uneven freshman campaign at N.C. State. He mixed extreme highs, with some bafflingly lackluster showings, resulting in his head coach being fired, and somewhat of a bad taste left in the mouths of Wolfpack fans.

Smith was nevertheless named ACC Rookie of the Year, as well as a Second Team All-Conference player, on the strength of his outstanding production, at 20.1 points, 5.1 rebounds, 6.8 assists, and 2.2 steals per-40 minutes pace-adjusted. His powerful frame, mixed with his explosive speed and leaping ability, created plenty of highlights in the ACC, and give him a tremendous framework to build off physically looking towards the NBA level.

Here's a closer look at the strengths Smith displayed throughout his time at N.C. State:


Smith is a nightmare in the open court, changing gears powerfully and being absolutely fearless slashing right to the front of the rim, where he can finish emphatically above the rim, or acrobatically off the glass. He has an excellent first step from a stand-still as well, getting low to the ground, and will often split ball-screens impressively, with a tight handle, excellent footwork, and the ability to take contact at the rim. Smith wasn't especially efficient from the field (50% 2P%), but made up for that at the college level with his ability to get to the free throw line at a strong clip, a product of his aggressiveness with the ball, and willingness to drive into the teeth of the defense to draw fouls.

In the half-court, Smith shows promise with his first step, array of fancy ball-handling maneuvers, and an innate ability to operate at different speeds. He wasn't in an ideal situation at N.C. State, being surrounded by three non-shooters almost at all times, in traditional two-big men lineups that clogged the paint and made his team easy to game-plan against. Nevertheless, he posted a solid 6.8 assists per-40 pace adjusted, the fourth best rate in our Top-100, as he is capable of creating space, surveying the floor and passing the ball with either hand out of pick and roll situations, sometimes in very impressive fashion.

Here's a closer look at the weaknesses Smith displayed throughout his time at N.C. State:


With that said, Smith still has plenty of work to do to become a more consistent floor general in terms of his mentality and decision making. He is not very vocal on the floor in terms of his on-court leadership, and the chemistry and body language he demonstrated with teammates left a lot to be desired, especially as the season moved on.

Smith is still figuring out how to effectively blend his scoring and passing ability, as he can be a bit of a ball-stopper at times, dribbling the air out of the ball and settling for long 2-pointers off the dribble before any of his teammates even get a touch. N.C. State's offense didn't look very smooth with him at the helm, as he can be a bit predictable at times with his approach, not always being a willing passer, and killing his dribble unnecessarily too frequently, leading to careless turnovers. While the lack of coaching and poorly-suited roster around him were definitely mitigating factors to consider, there's no doubt that Smith played a major role in his team's inability to win games and overall dysfunction.

Smith's jump-shot is something NBA teams will want to scrutinize more closely in private settings, to get a better read on how it might translate to the pro level. On one hand, he improved his 3-point percentages this season, making 36% of his attempts, many of them coming while pulling off the dribble and from well beyond the NBA line. He is a shot-maker who you can't necessarily go underneath screens on consistently with confidence, but was wildly inconsistent in this area as a freshman, having ten games in which he made between three to five three-pointers, and nine games in which he couldn't connect on a single attempt.

While Smith has clearly progressed with his jumper, getting red-hot at times and making a barrage of difficult attempts, there are still question marks about this part of his game, as he's only converted 32% of his career 349 attempts in games we have in our database. He is a very jump-reliant shooter, often holding onto the ball too long, and shooting on his way down. He connected on just 71% of his free attempts this season, and is a career 72% from the charity stripe (511 attempts).

Scouts also have question marks about Smith's defense, specifically the role he played in N.C. State ranking dead last in the ACC in this category. There's no doubt that Smith has the physical tools to be very good on this end of the floor if he wants to be, with his strong frame, quick feet, and solid anticipation skills that allowed him to get in the passing lanes frequently. He'll show you flashes of that at times, heating up the ball impressively, fighting over screens, and walling off penetration, but would never really sustain this for more than a few seconds at a time, relaxing in his stance as soon as the ball was swung the other way.

More often than not, Smith would stand completely upright on the perimeter off the ball, appearing to just be going through the motions waiting for the opposing team's possession to end. He doesn't have the type of length required to make up for his poor fundamentals and intensity-level, as his mediocre 6'3 wingspan will always make him a one-position defender regardless.

With all that said, there is still quite a bit to like about Smith's talent level, as guards with his combination of speed, power, explosiveness and creativity with the ball are what make modern-day NBA offenses go, and the situation at N.C. State was far from ideal. He will undoubtedly look better with NBA caliber talent surrounding him and better guidance coming from the sidelines, and will very likely put up big numbers if given the keys to a team's offense. Smith's ability to help a NBA team win games, and the affect he might have on an organization's culture, are issues that will he will continue to plague him until he can prove otherwise, and will likely drag his stock down a bit relative to some of his peers over the course of the draft process.
Read Next...