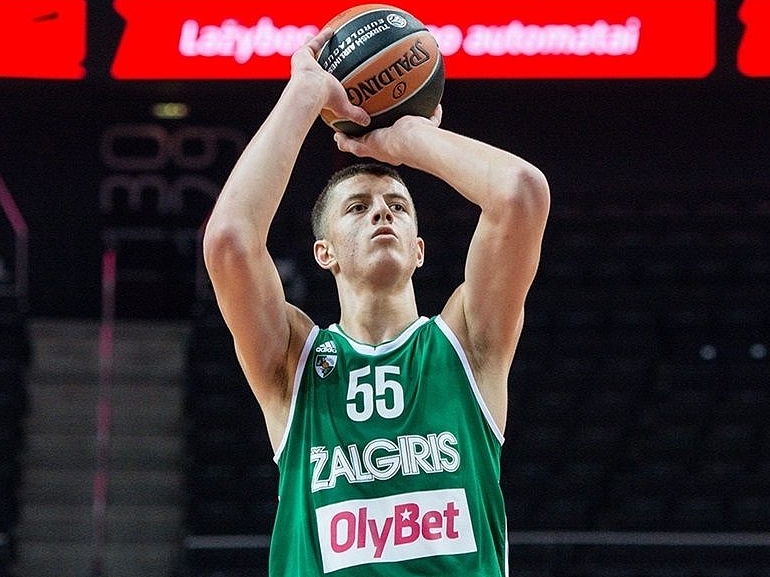 Isaiah Hartenstein has been playing sparingly in his first season at the pro level with Lithuanian Euroleague team Zalgiris, which is to be expected for an 18 year old. He had his momentum and continuity interrupted by the U18 European Championship in December, which required him to miss a significant portion of the month by being away with the German national team.

Opportunities to evaluate Hartenstein against top competition at the senior level have been few and far between this season, but he has had a handful of productive games in the weak Lithuanian league, particularly over the past six weeks. He had four games where he was able to step on the court from anywhere from 14-26 minutes, giving us some new film to study. At the end of February, Hartenstein posted a season high 13 points in the LKL in 26 minutes of action against Siauliai, going 5-11 from the field, while adding seven rebounds, two steals, two assists and four turnovers.

Hartenstein showed his ability to run the floor fluidly in the open floor, catching and finishing with soft hands, touch and strong body control. He also demonstrated the ability to operate off the ball in the half-court, slipping screens off the pick and roll, or ducking in for explosive two-footed finishes from the baseline.

A highly skilled player for his size, Hartenstein is a mismatch operating from the perimeter, as he can both create his own shot or space the floor with his jump-shot. In this particular game, he attacked a closeout impressively in a straight line on one opportunity, showcasing a strong first step, polished footwork and solid ball-handling skills. He also knocked down a 3-pointer fluidly, going one of two from beyond the arc, which is interesting at 7-feet.

Zalgiris is asking Hartenstein to improve his already outstanding frame and get a little more comfortable operating with his back to the basket, something he showed brief glimpses of in this game. His combination of size, relatively big frame for his age and mobility allows him to be a presence on the offensive glass, and he came up with three offensive rebounds in this contest, something scouts want to see him do more consistently.

While he's physically mature for his age, he's still just a teenager in terms of pure strength, something that was noticeable at times in this game, which he'll have to continue to address at the pro level. Playing against men, Hartenstein isn't always able to finish through contact, and can get pushed around at times, converting just 50% of his 2-point attempts in the LKL this season.

Defensively, there wasn't too much to take away from this blowout win against a group of overmatched Lithiunians, but nevertheless we saw some sparks of potential that leave plenty of room for optimism regarding his development down the road. Hartenstein is very agile for a 7-footer, as he demonstrated by getting in the passing lanes twice, and also protecting the rim as a weak-side shot-blocker. He has the size, length and budding strength needed to spend plenty of minutes at the center position, but also has the mobility to operate at power forward in bigger lineups as well.

Hartenstein has a huge opportunity in front of him as a member of the World Select Team at the Nike Hoop Summit in Portland. While a handful of scouts watched him have strong games at the U18 European Championship in Turkey and in the Lithuanian first division, he'll be able to showcase his talent in front of high-level decision makers from all 30 NBA teams in the week of practices, scrimmages and the official game versus the best players in American high school basketball.
Read Next...