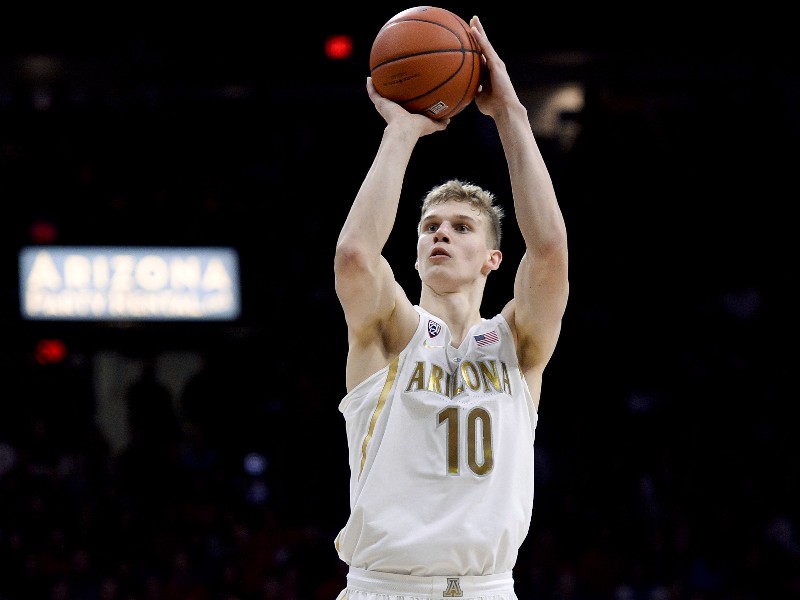 Among the most efficient offensive players in the country last season, despite a February shooting slump, Arizona power forward Lauri Markkanen had an outstanding freshman season.  Adding a potent new dimension to a KenPom top-20 ranked Arizona offense, Markkanen was critical to the Wildcats' run to the Sweet 16, and earned All-Pac 12 First Team honors while scoring 15.6 points per game on 42% shooting from beyond the arc, solidifying himself as a likely top-ten 2017 NBA Draft pick in the process.

The son of Pekka Markkanen, who averaged 6.9 points per game playing at Kansas under Roy Williams in 1990, before a long career that included stints in France, Hungary, Germany, and Finland, Lauri Markkanen emerged as an elite talent at a very young age in his native Finland.  Making his Second Division debut for BC Jyvaskyla and more than holding his own at age 15, all the way back in 2012, the Vantaa native grew into one of Europe's most promising young talents, ranking consistently among the most productive players at every FIBA Europe junior competition he competed in.  Holding a career scoring average of 15.6 points per game over 41% shooting from beyond the arc in international play, no one would have given it a second look if Markkanen had declared for the draft when he was eligible last season after he averaged 21.6 points and 7.6 rebounds over 26.3 minutes per game for Helsinki Basketball Academy in Finland's Second Division. Instead, he opted for a year under Sean Miller in the NCAA, which boosted his NBA Draft stock into the stratosphere by making the transition to college basketball look easy.

Markkanen's journey to this point is far from the norm, and his potential as an ambassador of the game in his home country is vast.  Finland, a nation of 5.5 million, or roughly the same size as Colorado, is not known as a hotbed for NBA prospects.  Only two Finnish nationals have ever made it to the NBA.  The most recent is Erik Murphy, who was born in France to a Finnish mother, but spent the formative years of his career in the United States, before being selected 49th in the 2013 NBA Draft out of Florida and playing 23 games in the NBA and then heading overseas.  The other is Hanno Mottola, who happened to be one of Markkanen's coaches at the Helsinki Basketball Academy.  Like Markkanen, Mottola emerged as a standout in Finland at a young age before spending four years at Utah under Rick Majerus in the late 1990's. He played 155 games in the NBA after being selected with the 40th pick in the 2000 NBA Draft.  Though Mottola and HBA have helped open the door for young Finnish players to pursue college scholarships, the emergence of a prospect of Markkanen's caliber is a massive develop for the country's basketball future.

Markkanen's intrigue as a prospect isn't difficult to see on first glance.  Looking every bit of his listed 7'0-230 pounds, he has great size for a power forward.  A fluid, coordinated athlete who lacks a degree of explosiveness, length, and physical strength, despite his improved, muscular frame, the 19 year old forward will need to continue to get stronger, but has a nice mix of tools to complement his advanced skill set his on the offensive end.

Here's a closer look at the strengths Markkanen displayed throughout his time at Arizona:


Its Markkanen's tremendous offensive ability at 7-feet tall that makes him such an interesting prospect.  A versatile jump shooter, the freshman did the majority of his scoring in spot up and pick and pop situations, but also used his athleticism to attack closeouts, score on put backs, flashed face-up ability in the midrange, made shots off the dribble at a nice rate, and was even utilized off ball screens.

One of the top jump shooters in this draft regardless of position, Markkanen made 42% of his 3-point attempts over 5.9 attempts per-40 minutes pace adjusted last season.  Among the top shooting players over 6'10 in NCAA history, he shoots the ball with a smooth stroke, great balance, and soft touch.  Showing good footwork stepping into shots on the perimeter and setting his feet quickly rising up on the move, Markkanen doesn't have the highest release point, but his size allows him to get shots off comfortably as he was just as efficient this season as a set shooter when lightly contested as when left wide open.  Dropping in dribble jump shots at a comparable 46% clip and making shots coming off of screens to both his left and right at a similar rate, Markkanen is as well-rounded a shooting big men to come out of the college game in some time.

In addition to his jump shooting ability, Markkanen is also fairly fluid off the dribble, allowing him to take what the defense gives him as a slasher.  Able to play way above the rim when he can gather a head of steam, Markkanen made some impressive plays this season finishing with dunks crashing the glass or beating closeouts.  Shooting only a slightly above average 56% around the basket in the half court, Markkanen's lack of length and physicality limits him when he doesn't have room to take off and he isn't the rangiest slasher looking more comfortable attacking closeouts lacking the explosion to consistently turn the corner attacking one-on-one.

Markkanen's offensive skill level figures to give whatever team drafts him a valuable asset, as his ability to spread the floor from the power forward position will make his teammates' lives much easier. The versatility with which he makes shots could also make him a terrific weapon for a creative offensive coach.  He may never be the type of quick-twitch athlete that can be a game changer scoring inside the arc, and is just an average playmaker off the bounce, but his ability to get stronger and more physical inside could ease his transition to the next level around the rim.

Here's a closer look at the weaknesses Markkanen displayed throughout his time at Arizona:


Defensively, Markkanen is a mixed bag.  He shows solid agility, good footwork when closing out, and does a nice job positioning himself against smaller players after switching, but his lack of length limits him as a shot blocker, he struggles at times defending more physical big men on the block, and he is just an average rebounder.  His upside on this end may not be remarkable, but he certainly has the potential to hold his own at the next level if he can develop as an individual defender inside given his ability to step out and guard on the perimeter, playing angles and leaving appropriate space defending quicker players.

Among the more intriguing forward prospects in this draft, Markkanen's strengths and weaknesses are fairly cut and dry despite his relative youth.  Shooters of his caliber at the power forward position don't come along very often, and even fewer have the pedigree to enter the draft at 19 years old.  There's an obvious niche for a big man who competes defensively and can score from the perimeter in so many different situations.
Read Next...