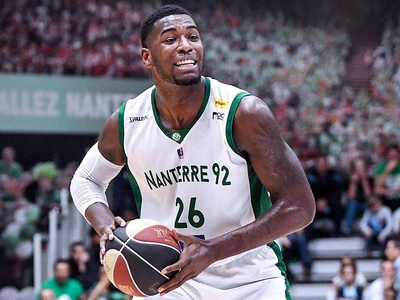 At 19-3 in the French league, and 12-2 in the FIBA Champions League, Monaco is one of the best teams Lessort will play all year, making this an ideal game to evaluate him.

At 21-years old, Lessort is automatically eligible for the 2017 NBA Draft, and is in the midst of a very strong season, averaging 18.5 points, 13.2 rebounds, 2.2 blocks and 1.4 steals per-40 minutes. He ranks fourth overall in PER in the French League, and is also Top-10 in PER in the FIBA Europe Cup, where his team recently advanced to the semi-finals.

Lessort has steadily progressed throughout this season and is making significant contributions to his team, who are 16-6 in the French league and currently tied for second place. Hes playing some of his best basketball as of late,  posting a combined 35 points and 18 rebounds in 55 minutes in the home and away playoff quarterfinal series in FIBA Europe Cup against Usak from Turkey this past week.

Playing with a huge motor, Mathias shows impressive physical tools, playing above the rim with the ease and having great speed in the open court and pick and roll.

Lessort is a bit undersized for a center and doesnt show the type of scoring range or playmaking ability from someone who might play some power forward, even if his intensity level and length on defense does help ease some of those concerns. The way the NBA game is trending will certainly benefit him, as teams are far less reluctant to use 69 centers as in the past, especially one with Lessorts bulk.

Once the NCAA Tournament comes to a close, NBA teams will likely head to France in great numbers to watch how he finishes his season and compare him with the many big men prospects hell stack up against in the Draft. Lessorts season will likely go well into May and possibly June, which will prevent him from doing as many workouts as some teams might hope. Considering the role he plays in a strong league like France, in a very comfortable scouting location such as Paris, as well as his success in European competition, NBA scouts will have plenty to work off of.
Read Next...