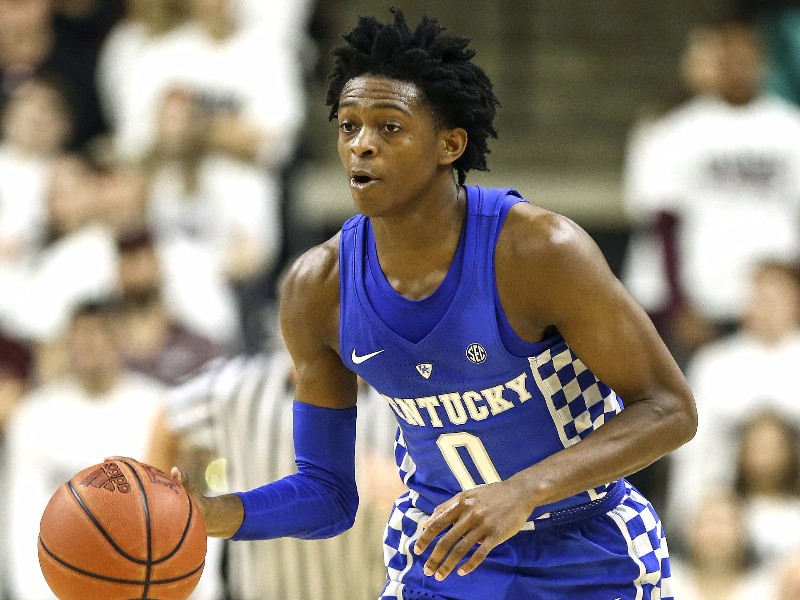 Jonathan Givony
@DraftExpress
When do the top college prospects for the 2017 NBA Draft take the floor on Sunday for the Round of 32 at the NCAA Tournament? And what will NBA scouts be looking for?

Note: The numbers listed next to player's names are their current standing in the latest iteration of our Top-100 Prospect Rankings


One of the most efficient offenses in college basketball will face their toughest test of the season in the form of Louisville, arguably the best defense they've seen all year.

After a very poor outing in the ACC Tournament vs Duke, Louisville's Donovan Mitchell had the worst shooting game of his career on Friday against Jacksonville State, going just 3-15 from the field, but contributed in other ways, pulling down 10 rebounds, dishing five assists, and getting 3 steals. He'll have a significant physical advantage against Michigan's guards, and his ability to challenge D.J. Wilson inside the paint will go a long way in deciding this game.
The redshirt sophomore Wilson is a fascinating story in his own right, as told yesterday by Nicole Auerbach of USA Today, a late-blooming 6'11 athletic big man who blocks shots, makes 3-pointers and finishes impressively around the basket. Wilson couldn't get off the bench last year behind an uninspiring cast of big men, but has been an integral part of Michigan's success this season. His ability to man the paint defensively and protect the rim from the center position was integral in the first round win against Oklahoma State, especially with the space he creates offensively as a spot-up shooter and emphatic cutter, diver and rim-runner in transition. NBA scouts will be watching closely to see whether he can continue to impact the game on both ends of the floor the way he has at times for Michigan (particularly in the Big Ten Tournament) against an array of long and athletic Louisville big men who will test his skinny frame and inconsistent physicality and toughness.

Arguably the most highly anticipated game of the weekend, this contest will feature a number of matchups with strong NBA implications. Perhaps the most telling will be in the backcourt, where lottery picks Malik Monk and De'Aaron Fox will be playing in the most important game of their career up until now. Fox is playing his best basketball as of late, and his ability to make good decisions with the ball, while exploiting his huge speed advantage will go a long way in deciding this contest.

Wichita State will have to decide where to play Conner Frankamp, a small combo guard with underwhelming physical tools, especially on defense. Hiding him on Isaiah Briscoe may be the route Gregg Marshall decides to take, as the Kentucky combo guard (who plays mostly small forward) has struggled badly with his perimeter shot over the past month or so.
Keep an eye on Wichita State redshirt freshman point guard Landry Shamet, who has excellent size and a narrow frame, and is a prolific outside shooter with an extremely high basketball IQ.  Shamet impresses with his ability to handle the ball and operate at different speeds fluidly, as well as make pull-up jumpers, but doing it against Kentuckys defense is a major test that scouts will be monitoring.

A dream matchup for NBA scouts, this game will feature two potential top-10 picks in Josh Jackson and Miles Bridges going head to head at the power forward spot. The freshman are very different types of players, especially physically, as Bridges sports a chiseled and mature frame, while Jackson is longer and lankier. Jackson has the benefit of being able to play off his outstanding guard tandem of Frank Jackson and Devonte Graham, not really being asked to do much with the ball as a pick and roll ball-handler or isolation threat, where he traditionally struggles. Jackson has been red-hot from beyond the arc over the past two months (14 games), making 21 of his last 40 attempts, so it will be interesting to see if he can continue to space the floor effectively for the Jayhawks.

North Carolinas Justin Jackson broke out of the mini-slump he suffered over the four last games of the season (7/31 3P), hitting five of his eight attempts against lowly Texas Southern. Arkansas isn't really known for its defense, and is very small at his position, so Jackson should be able to find more success. With starting point guard Joel Berry hobbled with a right ankle injury, the Tar Heels may need Jackson to shoulder more offensive production.

7:10 PM TBS Sacramento, California#3 Oregon #37 Dillon Brooks, #60 Jordan Bell, #71 Chris Boucher, Tyler Dorsey
vs.#11 Rhode Island Hassan Martin, Kuran Iverson, E.C. Matthews
Rhode Island's 6'7 senior center Hassan Martin had a strong first round game against potential lottery pick Justin Patton and Creighton, beating him repeatedly to the offensive glass, and holding his ground inside the paint defensively, making his life very difficult with his chiseled frame, long arms and outstanding motor. He found success against him in the post offensively as well, finishing through him with his explosive leaping ability, despite taking contact. He has another big test in store for him against Oregon, where Jordan Bell is one of the most agile and explosive big men you'll find in the college ranks, and will pose a much stauncher test defensively. It will be interesting to see if Martin sees any possessions matched up with undersized power forward Dillon Brooks, a skilled, aggressive and prolific scorer, as NBA teams would likely want to see a player in Martins mold be able to defend on the wing some considering his lack of size and limitations offensively.

7:45 PM truTV Tulsa, Oklahoma#3 Baylor #27 Johnathan Motley, Ishmail Wainright
vs.#11 USC #42 Chimezie Metu, Elijah Stewart, De'Anthony Melton, Bennie Boatwright, Shaqquan Aaron
USCs Elijah Stewart had one of the best games of his college career in the first round against SMU, which included the go-ahead shot on SC's final possession. His ability to cover ground defensively in the zone with his excellent closeout speed helped turn the tide of the game in the second half. It will be interesting to see how Stewart follows up that performance, as he's been wildly inconsistent throughout his career, particularly as a decision maker, as his basketball IQ and overall skill-level is still at an early stage of development.

The matchup inside between first round prospects Chimezie Metu and Johnathan Motley will be the ones NBA scouts will be watching most closely. Metu is an impressive athlete with a developing skill-level in many facets of the game, as he can make mid-range jumpers smoothly, attack defenders off the bounce, finish emphatically around the rim, an shows flashes defensively thanks to his agility. At the same time, Metu is a wildly inconsistent player who doesnt have a great feel for the game yet and is still polishing up his skill-set and figuring out who he is as a player. He's not as physical as you might hope defensively and on the glass, which is something Motley will be able to exploit with his chiseled frame, long arms and at times outstanding motor.

Scouts love Motleys productivity and physical tolls, but his average fundamentals, awareness and feel for the game, and his inconsistent motor cause him to underachieve at times, particularly defensively. This is a big time matchup with serious NBA implications considering whats at stake.


8:40 PM TNT Greenville, South Carolina#2 Duke #4 Jayson Tatum, #22 Luke Kennard, #28 Harry Giles, #44 Grayson Allen, #48 Frank Jackson, #54 Marques Bolden, Amile Jefferson
vs.#7 South Carolina #55 P.J. Dozier, Sindarius Thornwell
Sindarius Thornwell is in the midst of an outstanding senior season, and is fresh off an impressive 29 point, 11 rebound, 3 steal outing against Marquette in the first round, including shooting 3/6 from beyond the arc. Thornwell has a lot to gain in a game like this, matching up against the likes of Grayson Allen, Luke Kennard, Matt Jones and possibly Jayson Tatum, where he'll have a huge strength advantage with his chiseled frame. Thornwell is a handful to defend at the college level attacking the basket in both the open floor and half-court, as he loves contact, draws fouls prolifically, and will finish powerfully around the rim with his length and strength, and it will be interesting to see how Coach K decides to defend him. He's just a career 34% 3-point shooter, but is knocking down 39% of his attempts as a senior, and forcing him to make jump-shots might be Duke's best option considering their lack of size along the interior.

This is arguably the toughest defense UCLA has faced all season, which will make for a very interesting contrast for the #2 offense in college basketball. NBA scouts will want to see how Lonzo Ball handles the size, strength, length and experience of senior Troy Caupin, as Cincinnati will undoubtedly look to slow the tempo and force the Bruins to beat them in the half-court.
Another interesting matchup will be at the power forward spot, where freshman T.J. Leaf will face one of the staunchest collegiate defenders in the country in Gary Clark. Clark is undersized at around 6'7 or 6'8, and doesnt have the most imposing frame or overwhelming length, but he's incredibly smart and physical, with tremendous timing and toughness.
Leaf is an interesting case study for NBA scouts, as his productivity has been fairly underwhelming in the games he's played against strong competition. His scoring, rebound, and offensive efficiency has been sky-high against weaker teams, but he's posting fairly pedestrian numbers against the better teams he's faced. This is a great game for him to show that thats just a statistical fluke, and that he can get his shot off, cover ground defensively, take care of the ball and make 3-pointers with his funky mechanics even against players like Gary Clark.
Read Next...