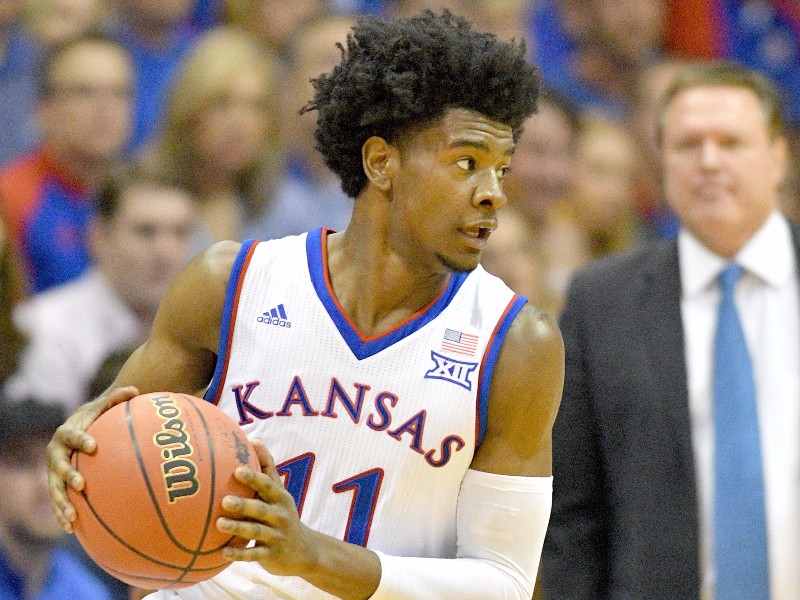 Jonathan Givony
@DraftExpress
When do the top college prospects for the 2017 NBA Draft take the floor on Thursday for the NCAA Tournament Sweet 16? What will NBA scouts be looking for?

A fascinating matchup in the frontcourt awaits us in the opening game of the Sweet 16. The red-hot big man duo of D.J. Wilson and Moritz Wagner, fresh off dismantling a vaunted Louisville defense to the tune of 43 points, take on Oregon, who lost a key shot-blocker in Chris Boucher.

The task of guarding these two will fall onto the shoulders of their best two NBA prospects, Dillon Brooks and Jordan Bell. Neither has great size or overwhelming length at their position, and NBA scouts will want to see whether they are able to slow down the two skilled and versatile Michigan big men, which is a test that could provide some insight projecting forward. We covered D.J. Wilson's ascent the last few weeks in detail yesterday with a video and scouting report. His matchup with Brooks could be one of the highlights of the weekend from an evaluation standpoint.

This is the matchup NBA scouts were hoping for when the bracket was revealed, as they'll finally get a chance to evaluate Gonzaga's prospects against a bunch of tough, long-armed opponents with a defense ranked in KenPom's top five.

Gonzaga's point guard, Nigel Williams-Goss, is in the midst of an outstanding season, and would very much like to cap that off by hearing his name called on draft night. His matchup with West Virginia's Jevon Carter will go a long way in deciding how realistic that is. There is a sense that Williams-Goss' weaknesses as an athlete and shooter have been masked somewhat this season playing against WCC opponents that are far more inferior physically than what he'd encouter at the NBA level. If he can handle West Virginia's press capably, make good decisions with the ball, and show that he's a better shooter than he's being given credit for, he'll build some strong momentum heading in the draft process.

The tempo this game is played at will be an influential factor in the outcome, as Gonzaga likes to slow it down, push the ball into the post, and take advantage of the size, basketball IQ and skill-level of Przemek Karnowski. William-Goss will be the one who will need to establish that.

Keep an eye on the matchups inside. Zach Collins and Johnathan Williams will have a major size advantage at their positions, and can help turn the tide of this game with their athleticism, length and defensive versatility. Collins has had a solid NCAA Tournament run thus far, but this is a much stiffer test than what he saw in the first weekend.

Kansas' frontcourt depth will be tested in a major way by Purdue's twin-tower duo of Isaac Haas and Caleb Swanigan. Scouts will want to see how the Purdue big men are able to handle Kansas' explosive offense, as their defensive prowess is considered the biggest hurdle they'll have to overcome in the NBA game.

Purdue's combo forward Vince Edwards has been on an absolute tear as of late, scoring 42 points in two games last weekend to help the Boilermakers advance to the Sweet 16. He will draw the assignment of guarding Josh Jackson to start at the power forward spot, and NBA talent evaluators will be paying close attention to whether he's able to continue to produce offensively, as well as how he handles him on the other side of the floor.

Xavier unexpectedly exploded for 91 points in the Round of 32, but they will have a much tougher task against Arizona. Trevon Bluiett scored 50 points in two games last weekend, and will likely see a variety of defenders attempting to slow him down, spearheaded by Allonzo Trier and Rawle Alkins. We haven't seen the best of Trier in the NCAA Tournament as of yet, as he's struggled with his jumper and has been a bit of a ball-stopper at times. He'll want to end his season on a much stronger note, preferably in Phoenix.

Freshman guard Kobi Simmons has all but fallen out of Arizona's rotation as of late, seeing just 38 total minutes of playing time in their past six games. He's looked highly dejected and clearly not on the same page with the coaching staff, which is particularly surprising considering his track-record going into college. NBA scouts like Simmons' talent-level but have major concerns about his intangibles, especially considering how much development he still needs in terms of his skill-level and basketball IQ. He's likely to declare for the draft, and will benefit from the advent of the two-way contract, which will allow him to make some decent money while the team that picks him evaluates if he can get his act together in the D-League.
Read Next...