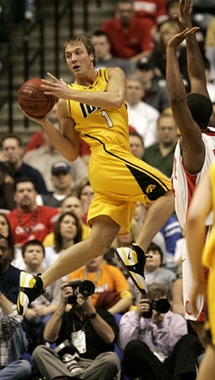 Eric Weiss
@DraftExpress
Haluska showed the good and the bad of his game during the third and final installment of his PIT performance. He is a physical specimen who has excellent athleticism, especially when attacking the basket. Haluska has the ability to finish shots with a high degree of difficulty while making it look easy at times. He absorbs contact well and displays some excellent body control when in the air, hitting a number of tough lay ups and a few smooth fade and fall-aways within eight feet of the basket.

His ability to hit tough shots around the basket is certainly a plus skill, as is his defensive awareness in help situations. But Haluska will have to work on his ball-handling and jump shot before he can be considered a legit prospect for the NBA level. Haluska showed almost no ability to go to his left hand in the half court and absolutely could not hit the perimeter shots that will be essential for him to master if he wants a role in the league. Hes got good size for the two-guard position, but its a position that requires consistent range and accuracy, two things that Haluska didnt show in this game, but has in the past here at PIT and especially during his career at Iowa.

An absolute dedication to working on his shot mechanics is a must for Haluska if he wishes to stay stateside with the big boys. The kid from Iowa has some skills around the basket, but his shooting form needs tweaking. Haluska shows solid shoulder and hip alignment on most of his shots, but he pushes the ball instead of pronating his wrist and getting underneath his shots with his hand, which causes his shots to drift left and right. After that, a little more court sense couldnt hurt as Haluska tended to force the issue, especially during the last game. There is no excuse for going 0-9 from three point range no matter what youre trying to display to the scouts. Finding a good coach and trainer will be key for him going forward if he wants to harness his game.
Read full article

Eric Weiss
@DraftExpress
This was another strong outing for Adam Haluska, a player that is establishing himself as one of the best prospects in Portsmouth and clearly one of the strongest candidates to get drafted. He showed off the various scoring tools he has at his disposal, and again got the job done in short scoring spurts. Haluska got to the rim constantly thanks to his terrific first step, and showed good toughness continuing to get into the paint despite traffic and the inevitable contact he was going to take. Haluska gets his shot blocked a decent amount even at this lower level of competition that he faces, so he will need to polish up his mid-range game and add a better array of floaters and runners if hes to find similar success driving the paint in the NBA. Hes not the best ball-handler youll find around either, so hes much better driving the paint in transition type situations than he is in the half-court. He got stripped on the few occasions that he tried to attempt some more complicated moves from the triple-threat position.

Haluskas 3-point shot was hot and cold today. His release isnt the cleanest in the world, but he has good enough touch to heat up from time to time and knock down a few shots. Not being a guy that really overly excels in any one area, he will clearly need to improve this part of his game if hes to stick in the NBA. Most teams arent going to allow him to take over as big a part of their offense as hes been accustomed to in college and here at the PIT, so he will have to become more efficient and also a better defender and passer if hes to show that he can play rotation minutes in the NBA at the 2-guard position.
Read full article

Eric Weiss
@DraftExpress
Adam Haluska had a very strong game to start off the tournament, showing off his versatile scoring ability while not forcing the issue, scoring from close, mid, and long range efficiently. Haluska didnt show off much other than scoring here, as his ball-handling and passing abilities werent on full display, but this was regardless a strong performance for a player who hasnt always been the most assertive with his game.

Haluska started off the game quickly with a drive-and-dish kickout for an open three-pointer, but his teammate wasnt able to convert. He came back down the court to take matters into his own hands, putting up a spot-up three-pointer where he exhibited a very quick release with a hand in his face. His shot is a bit in front of his face, but nothing drastic, so he shouldnt have a problem getting it off at the next level, even at 66 or 65. Haluska missed the rest of his spot-up shots from three-point range on the night, but he kept it going from the mid-range, showing off an impressive array of moves to get his shot off. One of his best moves on the night was when he caught the ball deep on the baseline and was in an isolation against his man; Haluska went through a succession of jab-fakes before putting up a long two-pointer with a hand in his face, swishing it easily.

Haluska got his mid-range game going in transition a bit as well, exhibiting excellent body control to make a jumper while moving at high speeds. On one play he drove down the right side of the court, made a quick stop along the baseline to turn into the hoop, and made a pull-up, fade-away shot with a hand in his face while drawing contact, making the whole succession look easy. His next move was very similar, but even more impressive, as when he stopped on the baseline, he pivoted, turned, and hit the same fade-away shot again.

Haluska did a good job taking the ball to the hoop as well, using his decent athleticism and first step along with the ability to draw contact and still get a shot off. He was fouled multiple times driving to the basket, still getting a decent shot off on most of them by protecting the ball with his body, and he converted all seven of his free-throw attempts with his smooth shooting stroke. Haluskas most impressive drive was one in which he got into the lane and spun off his man while still moving towards the hoop, putting in a nice shot off the glass.

Defensively, Haluska was on and off, making a few nice weakside steals and doing a good job overall of moving laterally to stay in front of his man, with a few exceptions where he got lazy and just didnt make the necessary effort to stay in front. Haluska also did a pretty good job staying with his man moving through screens off the ball.

If Haluska continues his impressive play here and into Orlando, he has a good chance of moving into the late second round in the draft. Hes very versatile and does everything fairly well, while possessing enough athleticism to get by in most areas. Against stronger, more athletic opponents at the next level, because at 65, he may not have as much success taking the ball to the hoop and finishing the way he does here and in college, he may be more prone to having his shot blocked near the basket, but his mid-range and long-range game should translate well, and with his passing and ball-handling he has skills he can contribute when his scoring isnt on. Haluskas biggest concern moving on here at the camp should be not forcing the issue when his scoring isnt on, reverting to using his ball-handling and passing to help his teammates until he can get his shot going again.
Read full article

Jonathan Watters
@DraftExpress
Haluska does a bit of everything, as his lines during the previously mentioned 3-game stretch will show. His second half shooting display against Indiana may have been the difference in that contest, as Haluska finished with 33 points on 9-17 shooting and 5-11 from beyond the arc. The senior was even hotter the next time out, going for 34 points, connecting on 6-11 from 3-point range, and adding 8 assists to just a single turnover. He only took 12 shots against Michigan, but still managed to contribute 17 points and 10 rebounds on the night. On the season, Haluska is averaging nearly 21 points, 5 rebounds, and 3 assists, while shooting over 38% from beyond the arc.

Haluska doesn't do one particular thing well, but has plenty of characteristics that could allow him to develop into a serviceable NBA roleplayer. He won't blow anybody away with standout athleticism, but Haluska has a decent first step and above average top speed, with the strength and aggressiveness to finish through contact on slashing moves to the basket. He is a creative offensive player, showing excellent court vision and ballhandling ability, while throwing in an acrobatic scoring move from the midrange on occasion.

As a shooter, Haluska will go hot and cold. He started off the season unable to buy a bucket, going 9-46 from the floor at the season-opening Paradise Jam tournament in the Virgin Islands, and shot just 10-38 in two games against Wisconsin. But the senior has bounced back since then, hitting at least two 3-pointers in all but four games since then, and knocking down at least four from beyond the arc on 9 separate occasions. He can continue to make improvements to his release when a look is contested well, but can get his shot off quickly once his feet are set. Haluska has always been more of a volume shooter and often needs a couple of looks to get going, so it will be important for him to pick up that shooting specialist's mentality if he wants to stick in the league.

On the whole, it should be interesting to see how Haluska performs in the pre-draft camps this summer. He is an intelligent player with enough athleticism to make it at the NBA level, and every now and then shows enough creative flair to make one think he might be able to handle the ball a little at the next level. He has faced ball denial defense all season long, and has grown in his ability to come off screens and excel in the decoy role. If Haluska can prove himself to be a bit more consistent as a perimeter shooter, he might be a player NBA teams look at in the second round.
Read full article

Eric Weiss
@DraftExpress
Haluska hasn't built on a promising sophomore season, with his scoring and shooting percentages having fallen off despite an increase in playing time. Nonetheless, Haluska is probably considered Iowa's top NBA prospect. He has a nice all-around game, utilizing solid athleticism in the open floor, capable of creating his own shot, and heating up from the perimeter every now and then. When he starts to hit from the outside, Haluska looks very much like an NBA player. While he doesn't appear primed for a breakout NCAA Tournament, a hot Adam Haluska makes the Hawkeyes an entirely different team on the offensive end, and a very tough out this March.
Read full article