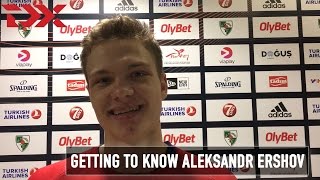 Strengths
-Strong, developed upper and lower body. Decent length. Somewhere between 6' 4 and 6' 5.
-Aggressive scorer who led the tournament in scoring  24 points in 27 minutes on 50.9% from two and 57.1% from three.
-Killer mentality. Doesn't play like a 16-year-old. Keeps coming at you. Not afraid of the moment. Went for 37 points in a win over Rytas.
-Powerful athlete with a big first step. Can play above the rim in space. Tough to keep in front from a standstill going either right or left. Not overly shifty but an aggressive straight-line slasher who uses his physicality at this level. Can finish through contact. Gets to the free throw line at a decent rate.
-Likes to operate from mid-post spots, using face up jumpers to set up his dribble drive.
-Mid-range killer who does a great job of stopping on a dime to get into his pull up. Shoots at the peak of his jump. Combination of aggressive straight line slashing and high elevation mid-range pull ups makes him a tough cover.
-Greatly improved 3P stroke  3-of-20 (15%) from three at the U16s (B) in Sofia, drilled 8-of-14 (57%) in Kaunas. 18-of-19 from the free throw line. Still shoots a bit of a push shot but he gets great rotation and appears much more confident. Always on balance. Shoots it the same way every time.
-Wants to score first and foremost but shows flashes as a playmaker  3.2 assists per 40 minutes. Can hit the roll man out of ball screens.
-Tough, hard-playing defender who uses his strength and athleticism both on and off the ball. Takes pride in stopping his man more often than not. Can sit down in a stance. Will rotate off the ball for blocks  1.8 steals and 1.1 blocks per 40 minutes.
-Very polished player for his age, ready to contribute at a fairly high level.

Weaknesses
-Good not great size for a traditional two guard. Only 16 but appears to be somewhat maxed out physically. Not a whole lot of room on his frame.
-Is his jumper for real? Shooting 3-of-14 from three in VTB Youth play so far this season. More of a mid-range killer right now, even with his glimpse of improvement from three.
-Doesn't have a ton of wiggle with the ball. More of a straight line driver. Handle can get a little more advanced.
-Most offense ran through him. Very isolation heavy. How impactful is he playing a role on an offense with constant side to side movement and ball screens? Can improve his ability to play out of ball screens both as a passer and as a slasher.
-A tad selfish at times. Not the most willing passer.
-Somewhat quiet on the floor, not really a vocal leader despite carrying the team.

Outlook
Ershov dominated the ANGT in Kaunas from a scoring perspective, proving nearly unguardable at all three levels. His improved range is a major plus and it opened up the floor for him in a big way, allowing him to get to his coveted mid-range spots or explode his way to the rim, using his physicality along the way. Ershov had a positive impact on the defensive end as well, showing that he has two-way potential thanks to his strength, athleticism, and compete level. Ershov's good not great size, somewhat selfish nature and reliance on mid-range jumpers may cap his upside slightly, but at 16 years old he's as polished and aggressive of a scorer as you'll see, and given his focus and kill or be killed mentality you have to think he'll do everything he can to maximize his potential. Ershov helped his stock as much as any player in the tournament. He will sign an extension with CSKA Moscow reportedly and continue to develop there.