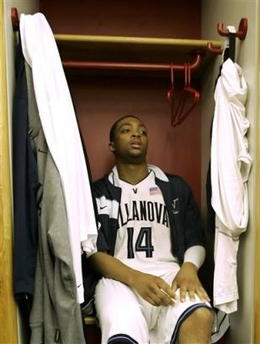 Joseph Treutlein
@DraftExpress
The final game of Allan Rays collegiate career is not one hes going to want to remember. There wasnt much Ray did well in this game, scoring only 11 points on 19 field goal attempts. Whether it was spotting up or taking it off the dribble, Ray just couldnt get his shot to fall. He was spotting up from three, pulling up for mid-range jumpers, and taking it into the lane with floaters, but nothing was working. When Rays shot isnt falling, he usually cant contribute much else, and we saw nothing new in this game. He wasnt a force on the boards, wasnt setting up teammates, and didnt do anything notable on the defensive end.

Ray will have opportunities to show his worth at the pre-draft camps this summer. If a team is looking for a scoring sparkplug off the bench, Ray could be a nice option. He has shown the ability to score in great loads at times, and certainly will be able to contribute in that regard for some team. But at this point, you cant really expect much more from Ray. Hes an undersized shooting guard who cant contribute anything other than scoring. And on top of that, he doesnt know how to turn it off when his shot isnt falling.
Read full article

Mike Schmidt
@DraftExpress
The only redeeming part of Allan Rays Sweet 16 performance against Boston College was the fact that his team came away with the win, although its hard to say that he had too much to do with it.

As weve seen happen at times this season, Ray was ice cold all game long, starting off 0-5 from the 3-point line in the first 10 minutes of the game and only got his first field goal of the game with 5 minutes to go in the half. Ray was dribbling into double teams almost every single time he put the ball on the floor, clearly forcing the issue and going nowhere in the process and in one sequence handing the ball off to his point guard Kyle Lowry with 3 seconds on the shot-clock near mid-court to force him to throw up a 40 foot desperation shot that obviously came nowhere close. Ray did not let his cold streak deter him from continuing to heave up shots, missing a few that he would normally hit with his eyes closed until it seemed like Coach Jay Wright reeled him in and asked him to settle down a bit. Luckily for Ray his fellow shooting guard Randy Foye was incredible for the last 30 minutes of the game and his point guard Kyle Lowry made some huge defensive plays. The only real thing that can be taken away from this game, considering the fact that we already knew that Ray is as streaky a shooter as can be, is the fact that when his shot isnt falling there doesnt seem to be anything he can do to really help his team out on the floor. If Villanova had any kind of depth coming off the bench he probably would have been asked to take a seat, but to his credit Ray didnt hurt his team much at the end by forcing up shots and instead let Randy Foye run the show since he had the hot hand.
Read full article

Jonathan Watters
@DraftExpress
An extremely clutch performance from Allan Ray, emphasizing to NBA scouts exactly the type of offensive weapon he can be. Coming just a week and change off a gruesome eye injury that had most people turning away from the television screen as it happened, Ray showed incredible toughness and selflessness to play and play extremely well in such a high stakes contest as if nothing had happened just over a week ago.

Things didnt start off all that well for Ray in the 1st half, as he was clearly forcing the issue a bit by over-handling the ball, taking some extremely tough contested shots (that he would later make with ease in the 2nd half) and not showing the best decision making in half-court sets.

All of that was quickly forgotten once the 2nd half started, as Ray put up 20 points and carried Villanova on his back to victory over a very talented and athletic Arizona team. Ray was unguardable both on and off the ball, hitting almost every shot he took from different spots on the floor, both in catch and shoot and off the dribble fashion from mid-range or behind the arc. Ray did an excellent job creating shots for himself, but never really with the intent of creating for anyone else besides himself, clearly showing us that he is still very obviously a shooting guard in a point guards body, but a very dangerous one at that. When Villanova needed someone to step up and knock down clutch free throws, it was Ray that calmly did the job with 4 big ones down the stretch.

These are the type of streaky performances weve become accustomed to seeing all year long from Villanovas flamboyant guard, and if he keeps this up there is no reason to believe he wont get a shot to do the same next year in the NBA as well.
Read full article

Joseph Treutlein
@DraftExpress
After a shaky first half against top ranked Connecticut, Ray absolutely put on a show in half two and led the Wildcats to an upset victory in what may as well have been a final four game for all intents and purposes.

Ray, a senior from New York City, was absolutely on fire in the second half. He hit contested three pointer after contested three pointer, and helped Nova gain a come from behind victory over the Huskies. Ray is an effortless shooter with NBA range on his jumper. Hes deadly on the pick and roll since he can absolutely murder his matchup if he decides to go underneath the screen, but will find the open man or take a few steps in to set up a mid-range jumper if his man hedges or switches. Ray is a volume shooter, extremely prolific and very confident in his ability to knock down shots at any time, from any range. He has a certain swagger to his game that you usually find in NYC guards, fully believing that every shot he takes will go in and showing absolutely no conscience to hoist one up at any given moment. He shoots just as well off of the dribble as he does from a set position, thanks to his excellent footwork, superb elevation and picture perfect mechanics squaring his shoulders and pulling the trigger with a lightning quick release. The Nova senior is not particularly bad off the dribble for the position he currently plays, and does a pretty good job of finding the open man as hes not selfish at all.

Unfortunately, Allan has a lot of things working against him. First of all, he is a 62 shooting guard who shows almost no point guard skills at all. To add to that, he cools off from behind the arc almost as quickly as he heats up, being streaky enough to miss a few wide-open threes in a row, but then exploding for 4-5 in a row that are contested by a 6-9 wingman such as Rudy Gay. Defensively, he has a tendency to take possessions off, not fighting through screens, rotating half-heartedly, and generally showing that he doesnt mind giving up 2 points on any given possession since he knows hell be able to come right back and score 3 in return. When Ray does put the ball on the floor (not all that often) he is not particularly effective finishing around the hoop. Hes much more comfortable settling for jump-shots, but has a hard time finding a way to contribute to his team when his shot isnt falling for him.

Even though Ray will find his fans amongst NBA types, these deficiencies make it extremely hard to project a player of his size to be drafted in the first round. Even a player like Salim Stoudamire who was even a better shooter (some would say much better) and at least played the point guard position on and off at Arizona in his 4 years there ended up landing in the 2nd round.

However, Allan is very much a second round prospect, as virtually every team can use a player like him off of the bench. It would not surprise at all to see him play a role similar to the one Eddie House or Damon Jones do, spark-plug type roles in the NBA when it is all said and done. If Ray is able to show better point guard skills in pre-draft camps, though, things could drastically change in his draft stock. Playing next to three guards who all have legit playmaking skills makes an opportunity of this type easier to find outside of Villanova.
Read full article