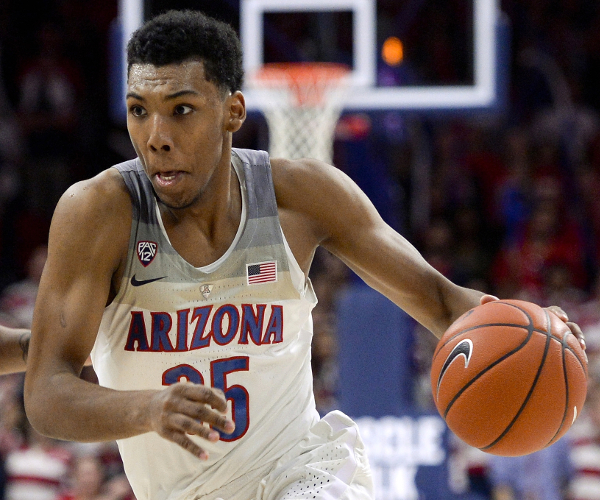 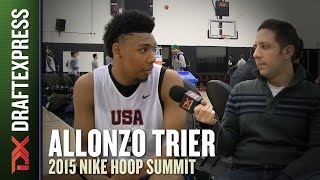 A top-20 recruit in the class of 2015 out of Findlay Prep, Allonzo Trier arrived in Tucson last season with lofty expectations. Slotted as one of the team's primary offensive options  and handed the additional burden of replacing lottery pick Stanley Johnson in the starting lineup  Trier experienced a predictably up-and-down freshman year in which he showed flashes of promise as a dynamic scorer but also displayed noticeable shortcomings with basketball IQ and commitment to off-ball defense.

After electing to forgo testing the NBA Draft waters and return to school, Trier will now look to improve on those shortcomings and further develop as a leader for a revamped Arizona squad. 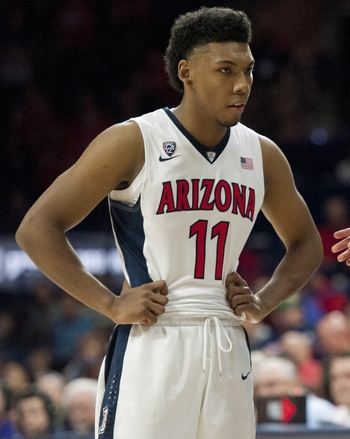 At 6-5 and 199 pounds, Trier has just decent size for his natural off-guard position at the next level. His 6-6 wingspan isn't particularly impressive either. While he would be better suited size-wise to the combo guard position in the NBA, his lack of court awareness, underwhelming ball-handling skills, and steadfast score-first mindset on the offensive end may make that transition challenging. Trier showcased an improved physique at the Nike Academy this past July, looking in noticeably better shape, undoubtedly taking advantage of Arizona's lauded strength and conditioning program over the off-season.

Trier's calling card as an NBA prospect lies in his scoring ability. He has a quick first step and an advanced series of crossover combinations that enable him to get into the lane fairly consistently when paired with his aggressive mindset. As a freshman, Trier averaged a strong 20.9 points per 40 minutes pace adjusted on a similarly impressive 61% true shooting percentage. Trier's success at getting to the free throw line was the key to his efficiency; per 40 minutes pace adjusted, Trier averaged 7.6 free throw attempts and shot an encouraging 79.3% on those attempts.

His jumper  while unorthodox  has proven to be fairly effective at the college level, but will need further tweaking to find similar results in the NBA. He shoots with a low release from his chest. The release is fairly slow and the rotation on his shot follows a knuckleball-like inconsistent trajectory. It's not pretty, but the results were encouraging as a freshman: Trier converted on 49-of-134 (36.6%) jump shots in the half court last year  an above average rate per Synergy Sports Technology.

Trier is also capable of shooting off the dribble with consistency. As a freshman, he hit on 18-of-43 jump shots off the dribble in the half court  an elite rate in the college ranks, per Synergy. Trier also has decent range with his shot. While the low (and slow) release may inhibit his success at the next level, Trier's displayed some solid touch from behind the arc. For the season, Trier hit on 40-of-110 (36.4%) three-point attempts.

Still, for all of his talent offensively, it's hard not to get frustrated with Trier's ball-stopping tendencies and apparent lack of interest with court spacing. Trier's usage hit 24.9% last season, one of the highest rates in the Pac-12, but his 1.6 assists per 40 minutes pace adjusted indicates he's just not enough of a team player at this point. And while he's not quite a turnover machine, he does turn the ball over more (13.8% turnover rate) than you'd like from a player who offers such little distributing.

Trier loves to play isolation ball and earned the moniker Iso Zo from the Wildcats fan base. While Synergy only tracked 12% of his possessions coming in isolation, it's fair to say that the percentage was actually significantly higher after accounting for isolation attempts in which he ate up the shot clock before eventually deciding to pass as a last resort. It's undeniable that Trier's court vision and ball stopping tendencies will have to improve as he makes the transition to being a role-player at the next level.
Defensively, Trier has the tools to be an effective perimeter defender at the next level. He's quick laterally and embraces assignments against top players in his conference. It's no coincidence that Trier had arguably his best defensive showing as a freshman against California, when he matched up against lottery pick Jaylen Brown.

Still, as is the case with his offense, Trier's physical talent far surpasses his mental diligence as a defender; he has a bad habit of losing his assignment away from the ball. And while he's undeniably active defending on-ball, that activity led to foul trouble and a bad habit of over-gambling as a freshman.

Trier certainly has the talent and make-up to play in the NBA. The question at this point is whether his understanding of the game will grow commensurate with his abilities. Trier showed some immaturity with demeanor as a freshman, frequently complaining to referees about calls. Now, following the departures of Ryan Anderson, Gabe York, and Kaleb Tarczewski from the Arizona program, Trier will need to assume more of a leadership role for this freshman-laden team.

Overall, there's plenty of room for optimism for Trier entering his sophomore year  especially if you take stories about Trier's work ethic at face value. As Sean Miller noted to Tucson.com, [He's] is the hardest worker I've ever had. I have never seen a player work like he has worked in the summer.

It'll be interesting to see how that hard work translates on the court as a sophomore. Trier already has enough scoring talent for a team to justifiably take a chance him in the second round of the draft. If Trier can show significant progress with the rest of his game, he'll help his draft stock considerably and the Wildcats will be in great shape heading into March.
Read full article

DraftExpress
@DraftExpress
-Standing 6'4 without shoes with an average 6'6 wingspan, Arizona signee Allonzo Trier tipped the scales at 207 pounds, 8 more than he did just a few months ago at the Nike Hoop Summit.
Read full article

Trier had an up and down game for the US Team after a solid first half. He flashed his athleticism early on by attacking a closeout and finishing at the rim in the half court and getting a steal in the passing lane and flushing an And 1 two-hand jam in transition. Trier also made two spot up threes but showed he still has room to grow as a shot creator and shooter off the dribble. He missed a step back jumper badly, missed an easy layup down the stretch, and took and missed a few ugly floaters in the lane. Trier is a bucket-getter and should fill it up at Arizona with his athleticism, size and solid stroke, but he'll have to improve his shot creation ability and become a more consistent shooter to make up for the fact that he's not quite great in one area.
Read full article

Allonzo Trier's 6'6 wingspan is below average for a wing at the NBA level, but he is almost exactly the same size that O.J. Mayo was coming out of USC already. Mayo stood 6'4.25 in shoes with a 6-6 wingspan and a 200-pound frame in 2008. Trier also stacks up favorably with Dion Waiters, as his physical profile matches that of a number of other prolific scoring two-guards. He'll have to answer the same questions his predecessors did about their length on the defensive end as his career progresses.
Read full article

Weaknesses
-Somewhat undersized for a shooting guard at around 6-4. Doesn't have great length to compensate
-Has somewhat awkward shooting mechanics. Low release, push shot
-Inconsistent shooter (33% 3P% 2014 EYBL, 32% 2013)
-Doesn't contribute enough in other areas yet besides scoring
-A little old for his class

Outlook Prolific scoring shooting guard who is currently leading the EYBL averaging around 30 points in 30 minutes per game. Has terrific scoring instincts, particularly in transition. Was extremely highly touted at a very young age, then fell off the radar somewhat, and recently reemerged as a top-flight player in his class. First player to participate in four seasons of Nike EYBL action.
Read full article