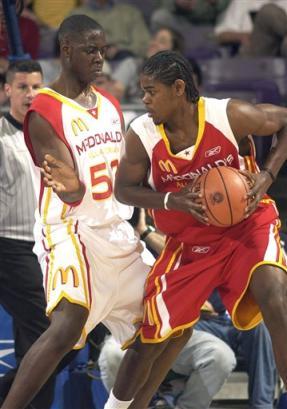 Matt Williams
@DraftExpress
Overview: An extremely young big man who is finally ready to play some minutes on the NBA level after declaring for the draft straight out of high school and taking a few years to pan out. Has great length, mobility, and athleticism, but still needs to fill out his frame. Has gained some weight since entering the League, but will need to continue to dedicate himself. Put up great numbers in the NBADL. Uses his athleticism to his advantage around the rim and on the glass. Still needs more game reps, but is only seeing sporadic time on the NBA level. Can showcase his skills in limited minutes. Has the potential to develop into a very good complimentary post player down the line, if he continues to work hard and expands his knowledge of the game.

Offense: Raw young post player, but loaded with offensive potential. Lack of experience makes him susceptible to bad decision making and questionable shot selection. Gets most of his shots off of offensive rebounds, post ups, and cuts to the rim. Finishes extremely well at the rim. Isnt nearly as good when he cant get at the backboard. Shows decent touch on his hook shot, but rushes it too often to be effective. Can make some shots from in close when he doesnt get pushed off the block. Doesnt have the bulk or show the effort level to maintain position against bigger players. Displays a rough looking jumper than he hoists from his shoulder. Needs to work on his fundamentals. Has shown decent touch, making his development seem more probable. Tremendous rebounder. Has surprising potential as a ball handler. Good enough speed to put the ball on the floor to create space. Gets a little too aggressive at times. Very fluid when dribbling up the court. Could add some change of pace and change of direction moves to see what those unique positional skills take him.

Defense: Still adapting to the NBA game defensively, especially in the post. Has the athleticism to defend most forwards straight up. Great lateral quickness for his size. Able to defend all the way out to the perimeter. Starting to fill out his frame as well. Has a tough time with post players that know how to get him off his feet. Loves to block shots, but he gets caught in the air when he gets aggressive. Doesnt get a lot of his blocks from the weak side. Will only get better with playing time. Has the potential to be a very good defender when he learns to recognize and anticipate his mans intentions with the ball. Needs to continue to improve his strength to be a better rebounder.
Read full article

Strengths
When watching Amir Johnson, the first noticeable skill has to be his great athletic ability. Amir runs the floor extremely well for a big man, often resulting in wide open lay-ups or dunks at the high school level. He also possesses long arms and nice leaping ability, enabling Johnson to snatch rebounds from high above, dunk on unsuspecting foes, and alter or block countless shots throughout the game. An added bonus is that Amir is comfortable jumping off of both his right and left legs which allows him to use his body to shield opposing defenders when going to the basket.

Offensively, he brings all the budding skills necessary for the new age power forward. Although the form on Johnsons shot is poor, he still manages to consistently knock down jumpers all the way out to the NBA 3 point line. He has shown an impressive post game for such a young player consisting of both right and left handed jump hooks, as well as a flurry of quick spins off the blocks. Amirs ball handling skills are not excellent, but they are very adept for a 610 player.

Amirs sheer athletic ability will allow him to be a solid defender at whatever level he decides to play at next year. He has the ultimate combination of length, quickness, and leaping ability to enable himself to potentially be a stopper.

Johnson has all of the tools you can ask for in a post player, the question is whether he will actually put them to use or not.

Weaknesses
The most glaring weakness of the Louisville signee, besides the fact that he is extremely raw and inexperienced, is the form on his jumpshot. Johnsons jumper contains very little lift, slow release, and a low point of release, enabling him to be blocked by smaller defenders. Although he may make a large amount of his shots in a shoot around or private workout without a defender guarding him, Amir does not have the same consistency in game situations due to the fact that he literally begins his shot from his waist and releases the ball at chest level.

Inconsistency is the next big thing that sticks out to me about Johnson. Whether it be his effort or his actual play, it seems to really hard to predict what Amir Johnson you will get night in and night out, as he doesnt always seem to be 100% focused on the task at hand. For example, there is the Amir Johnson from the Roundball Classic (17 points, 8-11 shooting, beat everyone up and down the floor, showed nice post moves) or the Amir from the McDonalds game (1 point, 0-5 shooting, didnt appear to play hard, looked absolutely lost in the post). Because of this, his age and the fact that his game hasnt been consistently evaluated against any type of competition, it is very tough to get a grasp on what type of player Amir will actually become. Basically, someone who drafts him will be taking a shot in the dark hoping that he pans out, considering all the many variables involved. The fact that eligibility issues have plagued him throughout his extremely short basketball career is something that also needs to be taken into consideration when talking about the likelihood of him realizing his full potential as a player.

The final weakness of Johnson is his extremely undeveloped body. Although he has a frame which can very easily be developed, at the moment Amir is a very frail player. At the first sign of any contact, Johnson can be seen crashing to the ground with a nice thud. He does not look to be more then 210 or 215 pounds, which is incredibly light for a power forward prospect. I remain confident that as long as Amir is able to land on an NBA roster, their strength and conditioning coaches will have an absolute field day with him and turn him into the physical specimen that his frame has the potential to be.

Outlook
Johnson unfortunately could not do enough to get himself eligible for college from an academic standpoint and therefore decided to give the NBA a try instead. While Amir has not officially signed with an agent, he did participate in a workout sponsored by SFX during the Chicago Pre-Draft camp along with Randolph Morris, Daniel Ewing, and Olu Famutimi. Considering the depth of the draft, the fact that he is years away from being able to consistently score in the league because of his body and extremely unpolished skills, and the fact that he wasn't really considered a good enough high school prospect to jump straight to the NBA, it currently looks like Johnson could go anywhere from the middle of the second round to undrafted. In the case that he is undrafted or is unhappy with his draft position, Amir has some options because he says he hasnt actually compromised his eligibility yet. He has the option of attempting to become academically eligible and attending Louisville (his best bet), playing in the NBDL for the team related to the NBA franchise that drafted him, trying to play overseas (unlikely) or in one of the minor leagues. No matter what his choice may be, this is the only time Amir will be able to go through the draft process because of his non-withdrawal at the deadline.

Comments
Has all of the tools in the world to be a productive player in the NBA. Still very raw and desperately needs a team who will be patient enough to develop him for a few years. Most likely will not contribute for a few years. The fact that a developmental league is in place should help his chances of being drafted.

Facts
Had 17 points, 4 rebounds, 4 blocks and 3 steals on 8-11 shooting in the EA Sports Roundball Classic.

Sat out his junior season at Westchester.

Attended L.A. Pacific Hills High School his freshman year, but did not play due to academic eligibility issues.