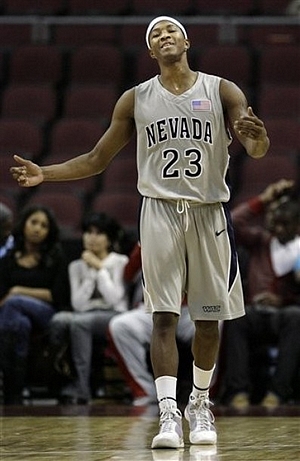 Matt Williams
@DraftExpress
Armon Johnson is one of the more dynamic and aggressive situational players in our ranks, but doesnt stand out in terms of efficiency.

With an overall PPP of .837, Johnson ranks below average, though his 63% shooting in transition is good for third in this group. Unfortunately for Johnson, Nevada didnt push the ball too frequently last season, as nearly 83% of his possessions came in half court situations.

When the game slowed down, Johnson took advantage of spot up situations, shooting a second ranked 48.7%, but did most of his damage one-on-one. Johnsons 6.11 isolations possessions per-game is second to only Devan Downey, though his 0.716 PPP represents his sometimes over-assertive nature. The same is clear in his shot selection. Though he got to the rim 4.26 times each game, he shot 4.5 pull-ups as well (2nd). Considering he only made his 38.8 percent of his shots off the dribble, it is clear that Johnson is on the ball-dominant side, and will need to be a more efficient player in a smaller role on the next level.
Read full article

One of the most impressive athletes in attendance, Johnson sports an outstanding frame for a point guard to go along with great explosiveness and quickness, both of which he makes full use of with his aggressive style of play. More impressive in scrimmages than drills, Johnson showed off a ton of intriguing qualities here, and looks to be making the most of going up against this tough competition every day.

In drills, Johnson fared about as youd expect given his resume, still showing slightly awkward mechanics on his shot and getting some inconsistent results. He did hit some nice pull-up jumpers and even showed some NBA three-point range, but he looked much more impressive in scrimmages, where he could put his array of athletic tools to use in a competitive setting.

In scrimmages, Johnson had some of the most impressive plays of the day, showing a great first step and an even better second gear to go along with it, only needing the slightest separation to turn it on and explode towards the rim. He complemented this with some pretty crafty moves in the lane as well, using some nice fakes and change of direction ability to get off shots.

Johnson also shot the ball very well in scrimmages, getting into a nice rhythm and hitting some spot-up NBA threes, while also mixing in some pull-up jumpers from the mid-range. He did a fairly good job distributing the ball, making some nice passes out of the pick-and-roll, but excelled more as a scorer here, though he did play a very enthusiastic brand of basketball that rubbed off on his teammates.

Heading into the combine and team workouts, Johnson is right in the mix at the top of the second round with a few other point guards and combo guards, and could help himself by continuing to shoot the ball well in workouts while also consistently putting together all his tools to play a steady offensive game. Theres no denying his physical tools, so its just a matter of putting everything else together consistently that will determine his success.
Read full article

Coming off a very strong sophomore season, Armon Johnson has made some strides with his game as a junior, but also has taken a step back in some areas. While his assist numbers have steadily climbed his three years in college, he's shooting the worst numbers for his career from the three-point and free-throw lines this season, certainly not something you want to see from a player whose biggest question mark coming into the season was his shooting ability.

Looking at his offensive game, it's quite clear that Johnson has an abundance of talent and skills, but his problem continues to be consistently putting them to good use. As a shooter, the interesting thing about Johnson is he actually appears to have pretty good natural shooting ability, as he is very effective when he's shooting in rhythm, with his shoulders aligned to the basket, and not moving from side to side, but too often he settles for incredibly ill-advised shots with his body contorted, his momentum going away from the basket, a hand in his face, etc.

According to Synergy Sports Technology, of the plays they've logged for Johnson this season, he's attempted just 13 catch and shoot jumpers as opposed to 54 jumpers off the dribble, an incredible ratio even for a point guard. What Johnson needs to do more than anything is get into a gym with a shooting coach and get all the bad tendencies out of his system, putting a focus on keeping his mechanics consistent and understanding the difference between good and bad shots. Johnson's decision-making in general is a cause for concern, as he will frequently not only take the aforementioned ill-advised jumpers, but he'll do it 5 or 10 seconds into the shot clock, settling for a very low percentage shot for no reason.

In terms of attacking the basket, Johnson has a very good first step along with excellent ability to elevate above the rim and draw contact with his very well-built frame, but his FTA/FGA is down from 0.33 to 0.24 this season, which can be seen in watching him play, as he seems more inclined to pull up for a spinning jumper with a hand in his face from 10-15 feet out than go all the way to the basket and throw his body around. To his credit, at the rim he finishes quite well, but he's just not maximizing his abilities.

As a point guard, Johnson shows excellent court vision in transition and very good court vision in the halfcourt when he wants to, being capable of making the full repertoire of passes. In transition he has a very natural feel for the game, finding a good balance between his own shot and creating for others, constantly keeping his head up with the ball. In the halfcourt he still seems to be growing into the role, however, as oftentimes he can get tunnel vision with his own shot, specifically when pulling up from mid-range.

On the defensive end, Johnson has had major problems this season, being beat off the dribble constantly in isolation situations, usually on his man's first step. He lets out of his defensive stance way too easily and doesn't appear to have the greatest reflexes in recognizing changes of direction. Also, for all his length and physical attributes, he doesn't do much damage in the passing lanes, making just 0.8 steals in 33.5 minutes per game.

Looking forward, Johnson clearly has excellent physical attributes to go along with very good skills for the point guard position, but he has quite a few bad habits with his game and has a lot of things he will need to work on to be an effective pro player. The encouraging thing is he shows flashes of brilliance in pretty much all areas of the game at times, and his shooting problems appear to be fixable if he puts in the work, but it will also require a mentality change in better understanding the difference between good and bad shots. It's hard to say anything definitive about Johnson's pro prospects at this point, as he could be all over the map depending on how he improves certain areas of his game, but it appears pretty clear that he needs another year in school to continue his development before coming out.
Read full article

An unheralded high school recruit when he decided to commit to his hometown school, Armon Johnson quickly proved to be a steal for the Nevada Wolfpack, winning conference freshman of the year honors in his first season before becoming a first team all-league selection in his second.

Showing great physical attributes for the point guard position, Armon Johnson may remind some scouts on first glance of another Nevada (state) productMarcus Banks. He has excellent size at 6-3, to go along with a terrific wingspan and a chiseled frame. Hes a good athlete on top of that, with a solid first step, the ability to play above the rim, and excellent lateral quickness.

Offensively, Johnson is, despite his size, much more of a shot-creating combo guard than he is a pure point. Left-handed, he gets most of his production in pick and roll and isolation situations, being very adept at taking defenders off the dribble, where he likes to use his brute strength to overpower his way into the lane. He gets to the free throw line in turn at a very nice rate, and also is capable of creating scoring opportunities for his teammates on drive and dish plays. When things break down for his Nevada team in end of shot-clock situations, Johnson is capable of making things happen off the bounce.

As a shooter, Johnson tends to struggle, showing awkward lefty shooting mechanics, particularly in catch and shoot situations. He does have some shot-making ability pulling up off the dribble, but his poor percentages from beyond the arc (25/90 3P, 28%) surely dont lie. Part of the problem begins with Johnsons shot-selection, which can be downright atrocious at times. Its not rare to see him bring the ball up the floor and heave up a terrible contested pull-up jumper early in the shot-clock, before anyone else on his team has even touched the ball. His poor decision making skills also tends to lend itself to forced drives, leaving serious question marks about his feel for the game and future at the point guard position.

Defensively, Johnson is outstanding, making full use of his excellent physical attributes (length, strength, size) to put solid pressure on the ball and keep his defender out of the paint. His wingspan allows him to contest pretty much everything, even if he doesnt come up with a great deal of steals, and he plays with a good amount of intensity on this end of the floor. Johnson tends to lose focus from time to time and overextend himself on the perimeter, but with good coaching and added experience, this shouldnt be a major issue.

Johnsons pro prospects will likely come down to his ability to improve his perimeter shooting accuracy (particularly in catch and shoot situations) and decision making skills. If he can get smarter and learn how to play more under control in his final two seasons of college basketball, while adding range to his jumper and becoming a reliable 3-point shooter, he could develop into a very nice prospect.
Read full article