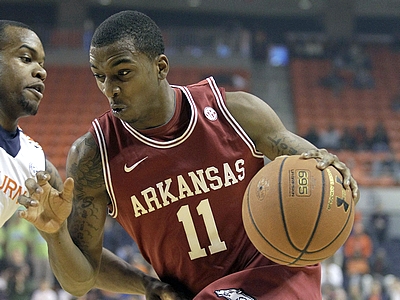 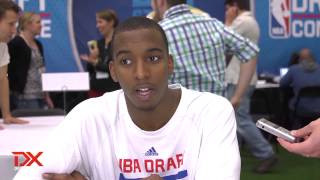 After a very efficient freshman season, B.J. Young strongly considered entering the 2012 NBA draft, before eventually electing to return to Arkansas. The hope was that Young would build on his promising debut campaign and ride a strong sophomore season to a comfortable position in the first round of the 2013 draft, after improving on some of the weaknesses he displayed as a freshman.

Things didn't go exactly as planned, as Young had a rather disappointing season, both individually and from a team perspective. Arkansas went 18-1 at home, but struggled to win on the road (1-12), and ended up not even being invited to the NIT after losing in the first round of the SEC tournament to Vanderbilt. Individually, Young's production dropped off in many key areas. His scoring rate went down by 10%, in no small part due to his struggles shooting the ball, with his 3P% regressing from an excellent 41% (on four attempts per game) as a freshman to 23% as a sophomore.

Off the court, Young had some rocky moments as well. He was suspended in November for a violation of team rules (reportedly due to missed classes), and was benched for disciplinary reasons against Texas A&M a few weeks back.

On the court, Young remains one of the most electric open-court scorers in college basketball, blessed with terrific quickness pushing the ball up the floor and the ability to finish above the rim. He gets a huge chunk of his offense in transition, as Arkansas ranks as one of the fastest paced teams in the NCAA, but he's also extremely effective here, converting 70% of his shot-attempts in fast breaks situations, while getting fouled 21% of the time.

As you can see in the chart below, there's a case to be made for him as the best transition scorer in college basketball, which is something scouts will surely find attractive considering the significantly faster paced nature of NBA basketball.

While nowhere near as effective in the half-court as he is in transition, Young is still a very capable scorer with the potential to get even better with added polish and experience. His offensive instincts are tremendous, as he shows an incredibly wide variety of moves at his disposal to keep defenders off balance, utilizing shot-fakes, jump-stops, spins, behind the back dribbles, hesitation moves and outstanding body control to go along with his explosive first step. He operates at multiple speeds, and loves to initiate contact at the basket, even if he isn't always strong enough at this stage to finish the shots he creates for himself inside the paint.


Young appeared very intent on proving he can play point guard this year, which helps explain the improvement he made in the assist to turnover ratio (1.65/1 this season, 1/1 last season) department.

Although it will depend on the team that drafts him and the style of play they implement, it's not a given that he will have to become a pass-first point guard in the NBA, as there are plenty of combo guard scorers his size who are thriving in today's NBA.

Showing average decision making ability, Young clearly looks more comfortable operating as a scorer, even if he can find the open man in transition or rolling to the basket on the pick and roll.

The biggest questions NBA scouts will ask themselves in the next few months will likely revolve less around his playmaking ability and more around the disappearance of his jump-shot this season.

After making 64 of his 146 (44%) attempts last season (48% of shots with his feet set and 37% off the dribble) according to Synergy Sports Technology, Young regressed badly this year, making just 32 of 137 (23%), not being effective with either his feet set (30%) or off the dribble (20%). He seemingly lost his confidence in his jumper this season, as he appeared to be experimenting with different release points as the year went on. Young's mechanics look much more like someone who can't shoot than those of a knockdown shooter, so how well he's able to shoot in private workouts could go a long way in convincing a NBA team that he has better potential in this area than he displayed this season.

Defensively, Young is a mixed bag. With his quick feet and long arms, he's capable of playing very good man to man defense when he wants to, and he can put excellent pressure on the ball in full-court situations as well. Off the ball, Young is pretty poor, though, as he's quick to get out of his stance and will relax far too easily as soon as his man passes the ball awaywhich is a real issue considering his team plays a lot of matchup zone, which demands a high level of attentiveness. He loses his focus in longer possessions and gives up on plays when he's not really into the game mentally, closing out with his arms down, struggling to fight over the top of screens, and not really hustling as much as you'd hope.

Even though Young is undersized for the shooting guard position, there's no question he has the tools to be an above average defender at either backcourt spot if he's willing to put forth the effort physically and mentally, something he hasn't always been asked to do throughout his career so far.

Young is undoubtedly one of the bigger boom or bust potential prospects in this draft, as his talent as an athlete and scorer are highly coveted traits in today's NBA, but there are significant question marks about his perimeter shooting ability and intangibles. Character concerns have followed him seemingly throughout his career, starting from when he was expelled from Christian Brothers high school as a sophomore, and then again when he was asked to leave Hazelwood Central high school as a junior.

His stay at Arkansas is not ending on the best note either judging by what his coaching staff is reportedly conveying to NBA teams, so the interview process and background checks will likely play a significant role in where he ends up getting picked and the success he ultimately finds.

Young wouldn't be the first talented young athlete to overcome such concerns and thrive at the NBA level after maturing, and the fact that he is the same age or younger than freshmen like Ben McLemore, Anthony Bennett, Willie Cauley, T.J. Warren, Alex Poythress and Steven Adams certainly bodes well for his long-term potential.

Young has a little over three months to prepare himself for the NBA draft, so anything he can do to improve his body, perimeter shooting or ease the concerns around his off-court concerns will go a long way in solidifying his stock.
Read full article

Top NBA Prospects in the SEC, Part One 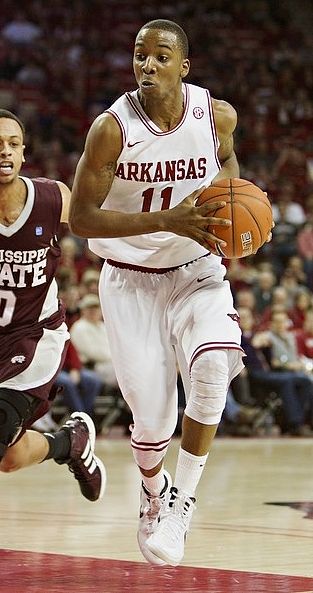 Arkansas freshman B.J Young has gotten his college career off to an impressive start, coming off the bench and providing the Razorbacks with a boost of energy, while also leading the team in scoring. The former top-20 recruit from the Saint Louis area has shown that he's capable of scoring in a number of ways, and he's managed to do so in an efficient manner.

Standing 6'3 with a long wingspan, Young has nice size and length for a guard prospect, to go along with a thin, wiry frame should continue to develop and get stronger in time. On top of that, he has outstanding speed and explosiveness, which he further enhances by playing with tremendous energy.
Young plays the role of a scoring guard off the bench for Coach Mike Anderson and the Razorbacks, playing about 24 minutes per game, as part of a balanced attack where nobody averages more than 29 minutes.

He uses over 30% of his possessions in transition, where he's an absolute jet with the ball in his hands and always in attack mode. In addition to his blazing speed, he effectively utilizes change of speed and change of direction dribbles, enabling him to get to the rim at will in the open floor.

In the half-court, Young spends most of his time off the ball and does much of his damage spotting up, where he's proven to be a very capable outside shooter, knocking down a solid 39% of his 3-pointers so far this season. He also shown the ability to pull-up in the mid-range area as well, looking comfortable shooting off the catch or off the dribble.

He combines his perimeter shooting with a lightning-quick first step that he uses to get into the paint off the dribble. He's proven to be an efficient scorer inside the arc, shooting 54% on 2-pointers this season, as he attacks the rim fearlessly and has also shown a nice floater that he utilizes effectively to score over bigger defenders in the basket area.

Perhaps the biggest question with Young as an NBA prospect is whether or not he can function as more of a playmaking point guard, or if he's more suited to primarily play as a scorer off the bench, similar to what he's doing this season at Arkansas. While he looks to have good instincts and doesn't appear selfish at all, he clearly plays with a scorer's mentality and hasn't shown much in terms of facilitating for others, as evidenced by his negative assist to turnover ratio and the fact that his 3.3 assists per forty minutes pace adjusted is lower than any other point guard prospect in our top 100 rankings.

With that said, he hasn't really had the opportunity to play as the primary ball-handler this season, and his ability to get into the paint and create could make him a tremendous asset as a playmaker at the NBA level. Although he doesn't get to run much pick-and-roll this season, he has the potential to be effective as the ball-handler in these situations, thanks to his ability to shoot the ball from deep and his blazing speed to turn the corner off the dribble.

Defensively, Young plays with great energy and has excellent lateral quickness and length, which makes him a pesky on-ball defender with the ability to put pressure on opposing ball-handlers. He may have some trouble with his bigger guards until he fills out more, though, and he will need some work on fighting through screens and better understanding positioning defense.

Overall, Young has certainly emerged as an intriguing prospect, as guards with combination of speed, explosiveness, and shooting ability are highly coveted in today's NBA. While his minutes and role may not change dramatically in the system he plays in at Arkansas, his draft stock could still rise quite a bit as he continues to develop his body and has a chance to show more of his playmaking skills.
Read full article