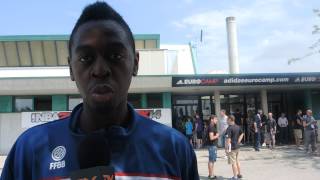 DraftExpress
@DraftExpress
French point guard Boris Dallo was a very highly touted prospect early on in his career, but hit a roadblock in his development upon leaving France for Partizan Belgrade, and has struggled to regain his mojo since. Dallo had a solid role for surprising Antibes in Pro A France this year, and showed some impressive quickness offensively, an ability to lock down multiple positions on the other end, and some occasional glimpses as a distributor. His inability to make shots from the perimeter, or even offer a consistent scoring presence, as well as his wild decision making, will be scrutinized closely in Treviso, but it's hard to argue with his physical tools.
Read full article

Jonathan Givony
@DraftExpress
-1994-born combo guard Boris Dallo played better than a he did in day one, scoring 12 points, pulling down 9 rebounds, and dishing out 7 assists to go along with 5 turnovers. Standing 6'5 with long arms, Dallo has excellent size for his position and shows promise as a playmaker in the open floor and on the pick and roll. Distributing the ball well today, he needs to continue to refine his shooting and ball-handling, but has the physical tools to be an interesting player down the road. Seeing inconsistent minutes in Pro A this year for Poitiers, Dallo is reportedly close to signing with Antibes, who will be promoted from Pro B next year.