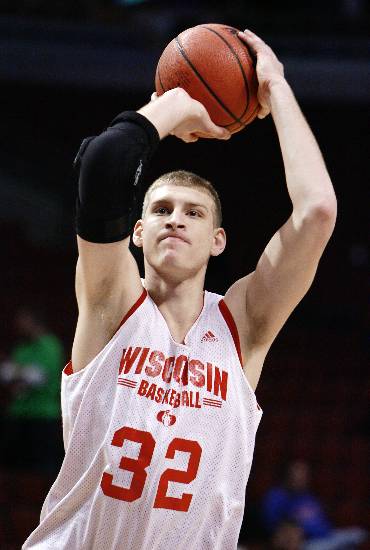 Richard Walker
@DraftExpress
With nine former NBA players on the rosters, the MVP of the NBA D-League All-Star game went to Bakersfields Brian Butch. Butch, who was just named as a replacement player last week, scored 18 points and grabbed a game-high 13 rebounds in leading the West to a 98-81 victory.

There are so many great players. I just came out here and tried to perform and do what I can do. Im just thankful for the D-League to give me the opportunity, said Butch.
Read full article

Joey Whelan
@DraftExpress
Brian Butch was one of the most heralded prep-prospects in University of Wisconsin history. The former five-star from Appleton was rated higher than the likes of Chris Paul and Trevor Ariza out of high school, and was expected to be a force in the Big 10. He has not exactly lived up to expectations, though, redshirting his freshman year even. However, this season, without the likes of Kammron Taylor and Alando Tucker by his side, Butch is going to have the opportunity to step up in a major way and assume the role he was recruited to fill.

Looking at his size, a legitimate 611 and 240 pounds, he seems to have the physical tools necessary to dominate the Big 10s undersized big men. He is not very athletic at all, but is mobile enough and seems to have a decent understanding of his own physical limitations to not limit his effectiveness. However, for a guy who has such great size for a college post-player, he really does not spend much time in the post. When he does, he looks extremely awkward, possessing neither good footwork nor good hands. It is almost as if he is surprised when he actually gets the ball in the post. He does not have an advanced set of post moves and when he actually gets the ball, he often brings it straight up to the basket. He doesnt look to pass, hesitate, or even pump fake his way out of traffic; he merely goes up.

Sometimes he can finesse the ball into the basket or obviously attempt to draw a foul, but oftentimes, he is blocked or stripped before he even gets the ball above his head. Even if he gets the ball to the basket, he does not have the greatest touch around the basket either: a surprise for a guy who is such a prolific jump shooter. The only time that he really scores in the paint is off the pick and roll or in transition, both when he can utilize his length and mobility to his advantage. The problem, as visible in game film, is that he just lacks the understanding of an offensive game when hes in the post. For him to even think about having a shot at the next level, he is going to have to look a little more comfortable on the blocks. The fact that he works and plays hard will pay dividends for him down the road, though, as it usually takes big men longer to develop.

Butch does not box out incredibly well and lacks some of the instincts and athleticism to rebound the ball at the next level. However, even without fundamentals, he seems to get the job done. Averaging 5.9 rebounds/19.5 minutes and 12.2 rebounds/40 minutes is impressive for any prospect. He lacks certain fundamentals, but he puts forth the effort that suggests better fundamentals is all that is necessary to put him in the forefront of NCAA rebounders this year.

Where Butch does look most promising, however, is from the perimeter. He is a prolific shooter and shot a respectable 47.5 % from the field and 34.0% from beyond the arc. From the perimeter, he displays nice form when he is shooting with his feet set, complete with a quick release. However, he must correct his tendency to push the ball and not fully extend his arms in his shooting form. He must use his height and length more to his advantage in most areas of his game, but it would be most helpful in his shooting motion. His movement around the perimeter is not good enough for him play there at the next level, but he does move more naturally on the perimeter than he does in the paint. He recognizes the mismatch he creates and exploits it to get open shots. He is also a decent mid-range jump shooter. He dribbles the ball surprisingly well for a big man and has better quickness when going into his mid-range motion than anywhere else in his game. This is not to say that he has become a great mid-range shooter, as he still has a lot of work to do in terms of form and consistency.

Butch is also fairly turnover prone, being a sub-par passer and decision maker. His 0.6 assists/game average reflects his inability to create when offensive opportunities are not there for him. He is equally weak in transition and when he is not inches away from the basket with the ball in his hands, he is dropping passes or throwing balls out of bounds. His defensive ability also leaves much to be desired as he is extremely soft in the post, but his mobility and length suggest that if pushed and taught fundamentals, he could at least be intimidating on the blocks.

Butch cannot be considered a great prospect at this point outside of his size and perimeter stroke, but with added responsibility could come a breakout year. Coming off of an elbow injury, Butch has most certainly been working on expanding his game, and Coach Ryan must utilize his versatile big better in the absence of Taylor and Tucker. Butch has a lot of work to do before being considered a draftable prospect, but 611 jump shooters with the physical characteristics and past resume of Butch are always on the radar.
Read full article

Jonathan Watters
@DraftExpress
Butch has been brought along slowly during his time at Wisconsin. After a red-shirt season, he has slowly become a solid contributor over the past 2 seasons. Right now, Butch is a skilled player with range out to the college three. If the Badgers are to advance in the NCAA tournament, Butch needs to score the ball consistently when he is called upon and concentrate on getting rebounds. He has only had double digit rebounds in three games this season, so he must focus on his positioning and timing in going for rebounds. In some games, Butch appears to just go through the motions, so some intensity would not only help his team play with more energy, but it would also eliminate the inconsistent performances that have followed Butch around all season. To solidify himself as a draft prospect, he will have to add muscle and improve his quickness. Right now he is a step slow in the flow of the game, and doesnt have the ideal athleticism of an NBA player. Right now its hard to project Butch into the draft, but he has some nice skills and 2 years of eligibility to improve.
Read full article