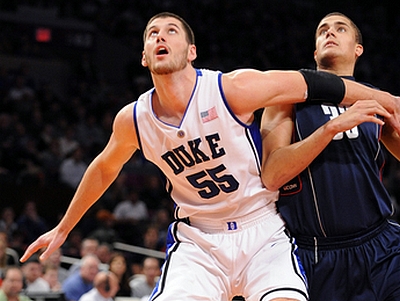 After dealing with nagging foot injuries for most of his career and spending the former half of this season serving as little more than a foul machine for Coach K and the Blue Devils, Brian Zoubek was elevated to the starting lineup in mid-February, transforming his role and Dukes season outlook in the process.

The countrys most dominant offensive rebounder on a per-minute basis, Zoubek played as important a role as any player in Dukes journey to a national championship.

Zoubek served as an efficient cog in Dukes offense, doing a lot of little things to open things up for his teammates. Most of Dukes halfcourt sets started with Zoubek setting a screen at the top of the key, something he does as well as anyone because of his massive frame , high motor, and great strength.

Zoubek also passes well out of the high post. Dukes offense frequently went through him on quick ball reversals, where he did an effective job finding the open man at the 3-point line.

Off screens, Zoubek was occasionally featured in pick-and-rolls, but his potential is severely limited here due to his lack of athleticism. He struggles to get off the floor, making his rolls to the basket a bit awkward, especially when dealing with weakside help.

Where Zoubek does his best work offensively is by simply crashing the glass. Hes as dominant an offensive rebounder as any NCAA player in the past decade, save DeJuan Blair.

Zoubek does an excellent job rushing the rim on every shot attempt and battling fiercely with anyone who gets in his way. He frequently uses his strength to get right to the face of the rim, where he does a great job of either putting the ball back quickly with a tip-in or catching and turning to pass to an open teammate at the 3-point line.

With his size and length, Zoubeks lack of a first or second bounce doesnt hurt him on tip-ins, but he can get into trouble when he tries to bring the ball down from an offensive board and go into a post move. Opponents tend to swarm him, leading to turnovers.

In the post, Zoubek has a reliable right-handed hook shot off his left shoulder in space, but not much beyond that. His moves are mechanical and his footwork is crude. He frequently gets into trouble when rushed or double teamed. He also struggles heavily when turning off his right shoulder. He gets flustered more easily in that position and does not have a go-to move there.

On the other end of the floor, Zoubek is similarly an excellent defensive rebounder, but not quite as dominant as on the offensive end. He does a good job in man-to-man defense in the post, using his strong base and great length to force opponents into tough shots. He has a good fundamental base and moves his feet decently, though hes still prone to getting beat by quick lateral moves. In spite of his good footwork, hes still awfully slow.

Zoubek is also incredibly foul prone, something that often hinders his playing time. He commits a foul every 5 minutes hes on the floor on average, which is part of the reason he only played 19 minutes per game.

On the perimeter, Zoubek looks like a fish out of water. He actually has surprisingly good fundamentals here, but his lateral quickness is awful and he shows no ability to change directions. He does do a good job of staying in the play when beat, though, using his length to contest from behind in the lane.

On pick-and-rolls, Zoubek has similar problems. His inability to change direction forces him to rely heavily on extremely aggressive hedges on the ball handler. Coach K did a good job of hiding this in his defensive scheme, but it was still prone to being exploited, as seen in the national championship game.

Zoubek will have problems in the NBA against good pick-and-pop players, and will likewise struggle against if he isnt drafted by a team that has good help-side rotations on pick-and-rolls. Zoubek also isnt much of a shot blocker, mainly because of his frequent problems with fouls and his lack of ability to elevate, but he is quite solid with his defensive rotations.

Looking forward, Zoubeks play has put him firmly in second round discussions. Its quite clear he has at least one NBA skill with his rebounding, and with his size, toughness, activity level and strength, could easily have an extended career in the NBA. He also brings a very high basketball IQ to the table, and should provide good offensive value to a team capable of utilizing his strengths.

The pool of 7-footers available to NBA teams looking to strengthen their frontcourt rotation is incredibly narrow these days, and its easy to envision Zoubek seeing minutes as a stop-gap off the bench for a team that doesnt need him to score points.

His long-term future in the NBA will likely come down to whether his offensive capabilities can offset the ways he can be exploited defensively, which is why going to a structured team with a good defensive coach would definitely help him out.

Developing a reliable 15-foot jumper down the road would also be very beneficial -- he only took one jumper this season, according to Synergy -- as it would give him more versatility on the offensive end.

Zoubek has gotten little to no attention from NBA draft services over the course of his career, but when its all said and done, he could end up spending more time in the NBA than the overwhelming majority of prospects in this class.
Read full article

At the Jordan Classic: Friday Scrimmage

Joseph Treutlein
@DraftExpress
Brian Zoubek showed off some of his diverse post game, using a variety of moves on the offensive end in the few attempts he had to post up his man. Zoubek started with a turnaround fadeaway jumper, which he easily hit over his man given his height. Next he tried a spin move on the baseline, which he drew the foul on. He also had an easy finish down low on one occasion, and on another made an impressive up-and-under move that he failed to convert.
Read full article