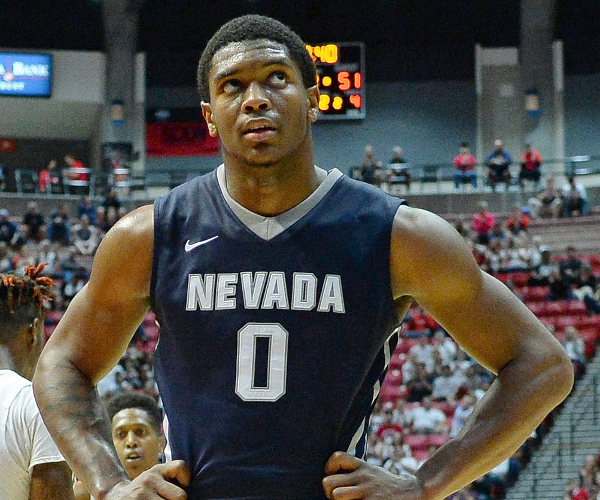 Ryan Thomson
@rthomson9
A relatively unheralded recruit from Sacramento, who originally committed to Oregon State, Cameron Oliver burst onto the scene in the Mountain West with Nevada. After a very effective freshman year, Oliver tested the NBA Draft waters but returned to the Wolf Pack, and continued to display his athleticism while flashing signs of a budding offensive game. Coming off a very strong showing at the adidas Nations in August, Oliver held sophomore averages of 20.1 points, 10.9 rebounds and 3.3 blocks per 40 minutes on a 57% true shooting percentage, earning Second Team All-Conference and cementing his status in the NBA Draft conversation along the way.

Oliver is quite intriguing from a physical perspective, as he measured 6' 8.25 with a shredded 239-pound frame, big hands and a solid 7' 1.25 wingspan  at the NBA Draft combine, very solid measurements for a modern NBA power forward. In addition to his physical tools, Oliver is an explosive athlete capable of finishing above the rim both in traffic and in the open court, a physical skill that has also served him well on the glass while at Nevada.

Oliver is an intriguing long-term prospect for a number of reasons beyond his physical tools, with his budding perimeter skills in particular catching the eye of NBA scouts during his second season in Reno. As a sophomore, Oliver shot 38.4% from beyond the three-point line, knocking down an impressive 2.3 per 40 minutes, the second-most among big men in the DraftExpress Top 100, behind only Lauri Markkanen. There are some concerns, however, about Oliver's jumper translating. He has a significant amount of lower body movement and shot only 67.8% from the free throw line in two seasons at Nevada, a statistic typically considered an indicator of NBA three-point proficiency.

At this stage, Oliver is still a raw offensive player who tends to make some low IQ plays, force the issue and settle for difficult, off-balance jumpers. He's a capable spot shooter, lob catcher, and can knock down turnarounds over either shoulder in the post, but his decision making still leaves much to be desired. Oliver averaged 3.0 turnovers per 40 minutes in the Mountain West Conference and will have to prove that he can make quick enough decisions with the ball to fit in a free-flowing NBA offense. He has the physical tools and shot making ability to potentially impact a game but will he be able to let the game come to him at the NBA level where he won't be force fed opportunities to score or dominate the ball?

Oliver's defensive outlook is similar in that he has the tools to be a major asset on that end, yet doesn't quite show enough consistency or discipline to be reliable right away. A physically imposing figure in the Mountain West, Oliver averaged 3.3 blocks per 40 minutes, the 4th best mark among DX top 100 prospects. He has the potential to be a versatile, impactful defender capable of moving his feet and guarding multiple positions while still serving as a defensive anchor of sorts when fully engaged. His awareness and effort, however, have been inconsistent in two seasons at Nevada - the main question marks that have likely relegated Oliver to second-round status. He tends to bite on fakes and has little feel overall defensively, though with time and patience he could become a valuable asset on that end.

Where Oliver must remain committed is his effort on the glass on both sides of the ball. He is far too athletic to wander through games aimlessly, giving little effort on the glass with his tendency to stand and watch rather than attack the ball off the rim. Averaging 11.7 rebounds per 40 minutes during his career at Nevada, Oliver produced at a solid level, but that simply doesn't tell the entire story as he has a tendency to float on the perimeter on the offensive end and stand and watch on the defensive end, rather than finding a body and pursuing rebounds with effort and maximizing his value on the boards.

At this stage, Oliver is a tremendous athlete who has shown flashes of being a versatile offensive player with his shooting and finishing ability, but his basketball IQ and inconsistent motor leave much to be desired. If Oliver can find a way to play hard on every possession and learn to make the right play consistently, he could have a chance to stick in the NBA as players with his athletic profile who can make shots, switch defensively, and block shots aren't easy to come by. How he shoots the ball in workouts and more importantly how his interviews and background checks go, will play a role in where he is drafted come June 22.
Read full article

Sacramento native Cameron Oliver was one of the breakout performers at the Adidas Nations. After an impressive freshman season in which he led the University of Nevada to a CBI title, Oliver had originally put his name into the NBA draft, but then decided to withdraw, adding a huge boost to Eric Musselman's rising Wolf Pack squad. Oliver's strong freshman year earned him Mountain West Freshman of the Year and Mountain West All-Defensive Team honors.

Oliver has a strong frame and the physical tools to make up for any shortcomings he has in terms of height at 6'8. What stands out most about Oliver is his dynamic athletic ability. He is an explosive leaper, who doesn't need much time or space to load up, as evidenced by some impressive above the rim finishes he had on tip dunks and in traffic. He has solid form on his jumper, and although he only shot 31% on 60 attempts from deep last season, he looked comfortable shooting it in L.A. in both catch and shoot and pick and pop situations, knocking down five of his 10 attempts. He has a bit of a dip in his stroke, where he likes to bring the ball down low before rising up, something he'll have to adjust against more length and athleticism.

He also showed the ability to score out of the post, showcasing some quick footwork and nice spin moves which he used to take guys off the dribble and beat them to the rim, or get to his spots for some mid-range jumpers. He really has a chance to have an impact on the defensive end of the floor given his athletic ability, which he uses well to control the glass, and get steals and blocks. He led the Mountain West in blocks per game last season at 2.4, impressive for a guy who stands just 6'8.

Given his physical tools, Oliver has a chance to earn much stronger interest from NBA teams in the near future if he can put together another productive season. At times the games looks a little too fast for him, and he can tend to rely on his athletic ability rather than his intangibles, and get caught gambling on the defensive end of the floor. It remains to be seen if he can continues to shoot it consistently from beyond the arc, a skill that will carry him a long way at the next level. Oliver was arguably the biggest breakout performers at the adidas Nations, and will certainly be monitored closely next season by NBA scouts.Interview from Adidas Nations