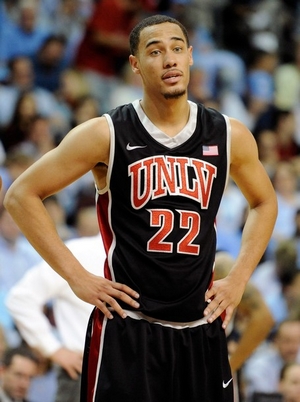 Chace Stanback is not the most glamorous prospect in the senior class, but he has played a major role in the Running Rebels' impressive 12-2 start. Along with fellow UCLA transfer Mike Moser, Stanback has made an impact on both ends of the floor and has come up big in key moments. His 28-point, 10-rebound effort in UNLV's upset of then top-ranked North Carolina was one of his more impressive outings, and while he certainly has some weaknesses as a draft prospect, Stanback has shown intriguing role-player potential on a number of levels so far this season.

While Stanback's numbers may not jump off the page and most of his averages have not changed all that significantly from last season, the senior has been extremely efficient through 14 games. After going 8-9 from three point range in a recent win over Louisiana Monroe, Stanback is shooting over 45% from beyond the arc this season, has knocked down his free throws at a superb 85% rate, and has turned the ball over just 16 times in 367 total minutes, one of the lowest marks among prospects in our database.

The efficiency Stanback shows as a role-player is significant, because he lacks elite NBA physical tools. The Fairfax high school product is not particularly fluid or explosive for a small forward, looking somewhat upright in his stance. Despite those limitations, his aptitude for playing within himself on the offensive end for stretches and ability to use his long arms and adequate lateral quickness to capably defend some forwards at the college level remain interesting.

On the offensive end, Stanback's most significant tool is his catch and shoot jump shot. With some 81% of his total field goal attempts coming in the form of perimeter jumpers according to Synergy Sports Technology, Stanback does a good job setting his feet out on the perimeter, shows a high release point, and seldom attempts a shot out of rhythm. Though he doesn't get great elevation on his release and is at his best when his teammates create open looks for him, he's flashed the ability to take what defenders give him and knock down pull-up jump shots off of one or two dribbles, connecting on a rock solid 51% of his jumpers overall.

Apart from the occasional drive into the midrange to exploit an off-balance defender attempting to close him out, Stanback is a limited shot creator for himself and teammates. He does not have an especially quick first step nor does his ball-handling ability afford him the ability to shake his defender in one-on-one situations. For that reason, Stanback is not a factor for stretches on the offensive end when his teammates are not making plays for him.

While his lack of aggressiveness as a scorer closer to the rim can be perceived as a limitation, from a NBA perspective, his ability to stretch the floor and not force the issue could be viewed positively considering the role he'd likely be asked to play at the next level.

Apart from his jump shooting ability, Stanback is not a terribly dynamic offensive threat, but his ability to play low-mistake basketball is a plus. Showing a nice feel for the game moving without the ball and converting simple plays around the rim, Stanback won't dunk on anyone in traffic or soar above a defender to pull down a rebound, but he is quick to fill open lanes, makes the easy pass, and uses fakes and soft touch to score in the immediate vicinity of the rim. Considering he leads UNLV in scoring, the fact that the senior averages just 1.2 turnovers per-game is indicative of his simple, but efficient offensive skill set.

Defensively, Stanback has had some nice stretches of play since doesn't give up on many possessions, does a decent job rebounding his area, and can disrupt shooters with his length. However, he lacks the lateral quickness to consistently deny penetration against quicker wings and does not have much experience defending the post. He does a terrific job shutting down driving lanes and contesting the shots of comparably athletic players despite getting out of position at times, but can't always compete with aggressive slashers when his motor isn't running hot. He's not a gambler by any means, but in order to compensate for his weaknesses defensively at the next level, he'll need to play a bit more conservatively.

A solid spot-up scorer who has shown flashes of potential defensively, Chace Stanback's jump shooting ability and length give him some merit as a roleplaying three who can stretch the floor for his teammates, not disrupt the flow of an offense, and offer a sound, albeit unspectacular, defensive presence against certain matchups on the wing. At 22 years of age, Stanback doesn't have the upside of other small forwards in this draft, but if he continues shooting the ball at a high level, stays out of trouble off the court, and gets dialed in during UNLV's tournament run, the Portsmouth Invitaitonal Tournament candidate could garner some attention next spring or in NBA training camp.
Read full article

Eric Weiss
@DraftExpress
Stanback has a good combination of length, quickness, and outside shooting. Its easy to see why UCLA has been attracted to him. Stanback has good form on his jumper, the release point is high and there is little wasted motion. He doesnt elevate much on this shot, but his length allows for him to get his shot off when closely defended.

Stanback has a decent handle, which allows him to get into the lane or simply set up another jumper from closer range. But, Stanback doesnt have much touch once he puts the ball on the floor, showing no in-between game in terms of runner anything else in motion. He needs a clear path to the basket to finish once hes commited to taking it strong. Hes not much of a passer and is very skinny, so he relies on his length defensively more than anything else. He's still very young as a 2008 prospect, though, so it will be interesting to see how he continues to develop.
Read full article