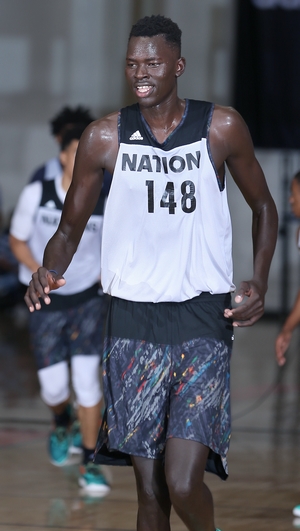 Strengths
-Has exceptional size and length. Around 7'2 or taller. Reportedly measured a 7'10 wingspan
-Very skinny but has a decent frame that should fill out in time with proper work
-Extremely mobile. Runs the court well. Quick off his feet. Covers ground fluidly
-Highly skilled for a big man his age
-Has outstanding touch around the basket. Finishes with both hands. Length allows him to finish from extreme vantage points. Releases his hook shots on the way down, making it difficult to guard and giving him a huge advantage when combined with his touch
-Can make a mid-range jumper with impressive mechanics and touch. Excellent free throw shooter
-Shows nice footwork and body control in the paint. Executes impressive spin moves.
-Has huge potential defensively as a rim protector with his exceptional length and ability to cover ground. Has a chance to be a game-changing defensive presence as he gains strength, experience and coaching.
-Shows good timing as a shot-blocker
-Has some physicality and competitiveness to him, despite his lack of strength

Weaknesses
-Frame is still a long ways away. Very narrow in the lower body in particular. Will take him years to add enough strength to compete against older and stronger players
-Still figuring out what his limitations are. Forces the issue at times offensively. Not a great passer. Tends to move the ball as a last resort.
-Lack of strength makes it difficult to gain deep post position. Will settle for high degree of difficulty looks regardless
-Lacks a degree of explosiveness from a standstill, partially due to a lack of strength as his body is filling out. Doesn't know how to handle contact at the moment
-Still trying to figure out how to make the most of his tremendous combination of length and mobility defensively. Very long legs and high hips make it difficult for him to bend his knees and get into a stance on the perimeter. Will get blown by off the dribble at times by smaller and more skilled big men.
-Rebounding numbers are fairly lackluster everywhere he's been. Career 8.2 per-40. Goes after rebounds with one hand. Lets loose balls fly right over his head. Doesn't show great awareness or instincts when it comes to tracking the ball. Gets boxed out relatively easy on the defensive glass

Outlook A native of South Sudan, Marial was discovered at the 2013 Basketball Without Borders in South Africa. Marial made his way to the US in 2014 to finish out middle school at West Oaks Academy in Orlando, before starting high school in Connecticut at Cheshire Academy. Did not have a great camp in the first three days, struggling with the physicality and strength of the older players, but then put on an absolute show in front of a national TV audience in the third place game, with 18 points, 9 rebounds and 3 blocks, many of which came on exhilarating plays. Still has three years of high school left as a member of the 2019 class, despite the fact that he would turn 21 prior to his first game in college if he decided to stay on that track.
Read full article