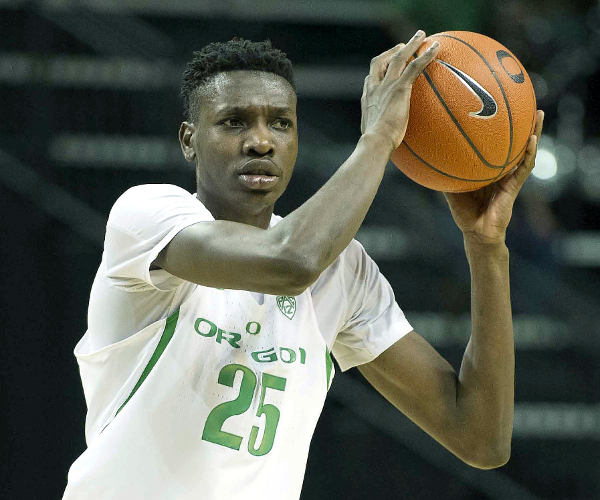 An entirely unheralded player just four years ago whose winding backstory Daniel Uthman of USA Today Sports outlined in fascinating detail last year, Chris Boucher is a player we could just as easily not be writing about today. From St. Lucia, to Montreal, to Pavillon Damase-Boulanger, to Alma Academy, to Junior Colleges in New Mexico and Wyoming, to Oregon, and finally onto the NBA draft radar as one of the top prospects in the senior class, Boucher's journey has been anything but ordinary, which fits well with the unusual skill set that helped the 23-year-old average 12.2 points, 7.4 rebounds, and 2.9 blocks per game en route to Pac-12 All-Conference Honorable Mention honors. 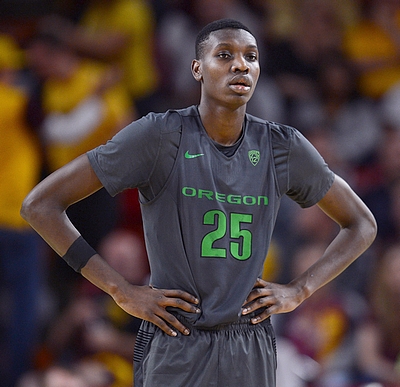 Standing 6'10 in shoes, with a 7'3 1/2 wingspan, Chris Boucher's ability to make an instant impact at the college level was based on his unique physical tools. His tremendous combination of length, agility and explosiveness helped him impact the game as a rim protector and finisher from the moment he stepped on the floor for Dana Altman's Ducks. However, weighing just 193-pounds, Boucher's rail thin frame limited him at times as well, and his ability to fill out his frame, particularly in his lower body, is one of NBA scouts' main concerns about his upside as he looks to make the jump to the next level.

The 2014-2015 NJCAA Division I Player of the Year, Chris Boucher averaged an impressive 22.5 points and 11.8 rebounds per game at Northwest College (WY) and appeared to be a potential x-factor for an Oregon team searching for immediate front-court help heading into last season. Finishing fourth in scoring and first in scoring efficiency on one of the nation's more balanced, talented offensive teams, Boucher exceeded expectations emerging as one of the most unique weapons in the country.

Boucher scored most of his points in the manner you'd expect, using his length and athleticism crashing the glass, running the floor, and finishing the shots his teammates created for him in close. His feel for the game isn't particularly advanced, and he seldom finds the open man passing the ball, but his physical tools made him a valuable roleplayer in Pac-12 play as he meshed very well with the talent Oregon had around him. He used fewer post ups than many guards in the country last season, but tallied almost one third of his total possessions in spot up situations as he flashed the ability to spread the floor.

At 6'10, Boucher's ability to make shots from the perimeter is a bit of an anomaly, and when you factor in his prowess as a shot blocker, it is downright rare. Shooting the ball with funky, slow, flat-footed mechanics and inconsistent follow through, Boucher is nonetheless a threat to step out to the perimeter in the pick & pop or playing off the penetration of his teammates. When Boucher does pop out to the perimeter, he almost always sets up shop beyond the arche attempted 113 3's and just three midrange shots with very few drives in between a year ago. Making one attempt from deep per game while shooting 34%, down from an astonishing 44% in his last season of junior college, as awkward as his mechanics appear, Boucher could conceivably add value as a floor spacer at the next level, particularly if he can shore up his mechanics, quicken his release, and get used to shooting over pressure.

Aside from his ability to shoot the 3, Boucher is primarily a rim-runner and finisher in the half court, where he is a target for lob passes, able to finish put backs emphatically, and even able to score an occasional hook with some basic footwork when the moment calls for it. His hands are good, but not great, and lacking a degree of strength, he gets pushed around inside and doesn't finish through contact very well. Nonetheless, his activity level on the glass and leaping ability make him an efficient complementary option on a team with multiple ball handlers.

Defensively, Boucher was one of the most productive playmakers in the college game last season finishing the year ranked ninth in blocked shots per-40 minutes pace adjusted. A capable weakside shot blocker who also makes some impressive plays swatting shots on the perimeter and when defending on the ball, Boucher's length and ability to cover ground help him impact the game. He is not a very physical defender, isn't always quick to rotate or crash the glass, and can be a bit jumpy and overaggressive at times, however, and will face some questions about his ability to battle for defensive rebounds and match up with the far more physical big men he'll come across on a nightly basis at the next level.

Turning in a strong showing at the 2016 Nike Basketball Academy, Boucher has effectively come out of nowhere to rank as one of the most unique players in college basketball. One of the only players in NCAA history to average over one made three and 2.5 blocks per game while shooting over 60% inside the arc, the St. Lucia born big man is an unusual prospect. His age, limited frame, and raw skill level will hold him back a bit in the eyes of scouts, but his ability to protect the rim and potentially score from the inside and outside certainly gives him some intrigue. Boucher will have a chance to further build his resume this season and could certainly hear his name called on draft night with a strong year.
Read full article

Jonathan Givony
@DraftExpress
23-year old big man Chris Boucher is still caught in NCAA limbo regarding his eligibility status for next season, but he's managed to create a really nice backup plan for himself if things don't go well with his appeal. Boucher's timely outside shootinghe made three 3-pointers in the Pac-12 Tournament Championship game for exampleand strong rim-protection ability has quietly intrigued NBA teams, despite his incredibly underdeveloped frame and advanced age.
Read full article